One of the more troubling aspects of our times is the fetish against the free press, including too often by the current U.S. President. So we are only offering constructive criticism not attacking the media when we write that Reuters owes its readers an explanation for its Wednesday, January 8 (Seattle Times) article reporting that a “Canadian security source” asserted the Ukraine airliner was not shot down by a missile but instead was a matter of technical issues. Reuters reporter, David Ljunggren, claimed this source thought “there was some evidence one of the plane’s engines had overheated.” Shortly, thereafter, Reuters followed up with another article stating, “Five security sources—three Americans, one European and one Canadian—told Reuters the initial assessment of Western intelligence agencies was that the plane had suffered a technical malfunction and had not been brought down by a missile.” We understand initial information is often wrong but anyone with half a brain knew from the beginning that mechanical problems were not the cause of the crash. Even our quarter size, non-aerospace, non-Iran expert brain knew this article was BS that very night (our “security sources,” i.e. our spouse, can confirm this). So the question is who were these “intelligence” and “security” sources? Were they really in a position to know? Were they feeding Reuters false information on purpose? Did Reuters stop to think how illogical the assertion was that the plane exploded and then crashed due to mechanical failure? Reuters owes its readers a forensics accounting of how they got this article so wrong. Their reporting was rebroadcast throughout the night and even the next morning by everyone from NPR to other distinguished publications with potentially troubling ramifications for Boeing and others. As Tom Cruise yelled in A Few Good Men, we want answers…and in this case we can handle the truth. And we present the truth to you today on world GDP growth since 1950, an update on a still underrated country and the continued success of Vietnam. It’s this week’s International Need to Know, the first quarter Houston Texans, the second quarter Kansas City Chiefs of international news and data.

We would be remiss if we did not note the passing of another New Orleans music icon last week—5th Ward Weebie. A rapper, and major foundation of the New Orleans Bounce scene (a form of hip hop, where twerking originated). He is featured in Trombone Shorty’s Buckjump. RIP. (Mailchimp is having troubles loading videos so we can only link to Buckjump)

In our upcoming speech on globalization and inequality, one of the points we make is the world is much better today than it was 70 years ago. Inequality is a challenge but as we work to fix that problem we shouldn’t destroy what helped the world succeed the last 70 years. To that point, Our World in Data graphically shows this in the chart below (click on the chart to enlarge and see each country better). What it shows is that the average person in the world today is now 4.4 times richer than they were in 1950. Almost every country in the world is wealthier today than in 1950 with nine countries now 15 times wealthier than they were 70 years ago. Unfortunately, nine countries are poorer today than they were in 1950. Any guesses who they are? But shifting back to the winners, Taiwan, which recently re-elected their President, had an income of $1400 in 1950. Today, Taiwanese are among the richest in the world. We will have more to say about Taiwan in our upcoming book about China and the U.S. Stay tuned! 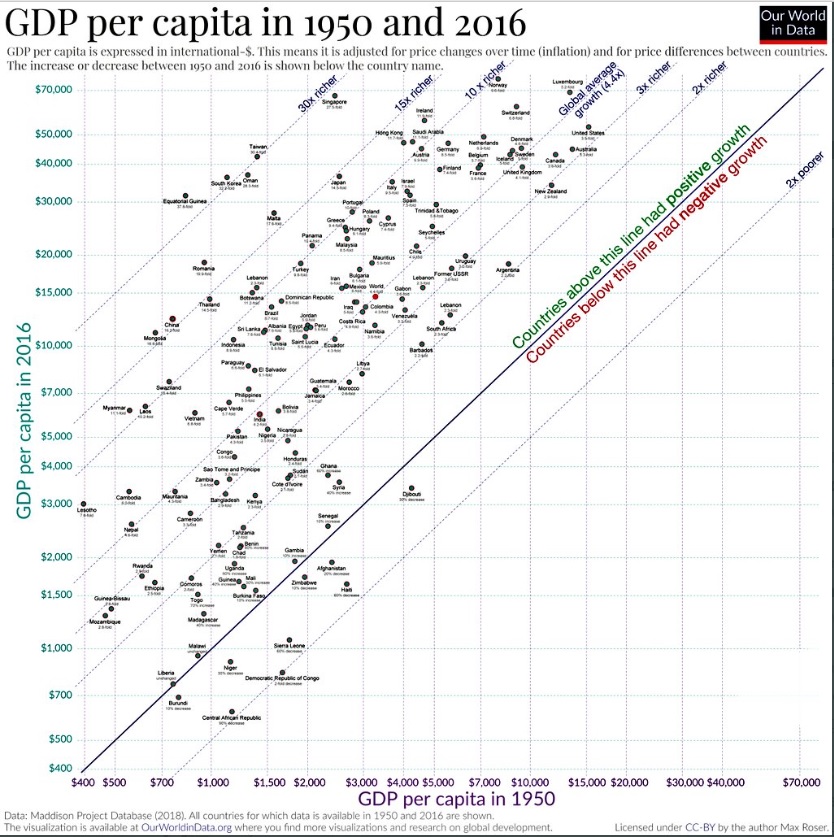 Since Prime Minister Abiy Ahmed won the Nobel Prize, I suppose we can’t call Ethiopia the most underrated country in the world, but it is still somewhat underrated. For example, did you know Ethiopia had the second highest rate of GDP growth last year? Yep, Ethiopia grew at 10.6 percent in 2019, just behind Nauru* and continued a 13 year run of high rates of economic growth. But it is not all rosy news. Ethiopia’s inflation rate reached 19 percent in 2019, much higher than previous years. Its unemployment rate has also increased significantly in recent years, and its exports have slowed. These headwinds are why the World Bank is predicting Ethiopia will only grow at 6.3 percent in 2020. We shall see. In the meantime, the reformist minded Abiy is still planning on elections for this May and June. This coming year could be a pivotal one for our underrated country.

*Who knew there was a country called Nauru? Did C.S. Lewis make this up? Talk about underrated.

We head back to Vietnam in a month and a half, and as always, are looking forward to it. No country has gained more from the U.S. – China trade war than Vietnam. In fact, as you see in the chart below, no country received more manufacturing foreign investment than Vietnam since 2014. On our trip to Vietnam last year we saw some of this investment up close, including a shoe factory that moved there from China in 2015. GDP in Vietnam grew at 7 percent in 2019 and the country is likely to see strong growth this year too. Our biggest fear for Vietnam is Trump will discover it and start imposing tariffs on goods coming from there. For anyone who cares about trying to reform China, this would be one of the most short-sighted policies possible. Which is why we worry it will happen. In the meantime, Vietnam’s strong economy is also illustrated by the number of foreign retailers interested in entering the market or expanding their presence there. Japanese and Korean retailers such as Uniqlo and Lotte both have big plans there. That’s another data point, perhaps even more significant than GDP, of Vietnam’s success. It remains one of the four most important countries in the world, as we explain in our upcoming book.

Did Globalization Cause Inequality, Spiting Our Nuclear Noses with Coal, and... What the ASEAN Elite Think, South Africa is Poorer, and No Free Finnish Lun...
Scroll to top