On Sunday afternoon at the gym as I looked up from the bike to the bank of televisions above, all but one was talking about the death of Kobe Bryant, his daughter and the seven other unlucky souls (one TV incessantly played Law and Order reruns*). It did not matter whether the channel was on ESPN, CNN, MSNBC, or even Fox News, everyone was fixated on Kobe. Perhaps that was to be expected but what was interesting was they were all covering the story in the same way—a tragedy, obviously, but all with reverence for Kobe Bryant and respect for his many basketball accomplishments. As a lifelong Seattle Supersonic fan, I almost always rooted against Kobe on the court and was occasionally troubled by his off court behavior such as the credible allegations of rape against him in 2003. But in death, Kobe appears to have done what no one else has—temporarily united the country, as usually when I look at the gym’s TVs they are all covering completely different worlds–Fox, MSNBC and CNN were identical.** Plus, in listening and reading about Kobe in recent days it appears he learned and grew from his past transgressions and acted in some ways to atone for them,*** including in his stellar support of women’s basketball. And so we find ourselves finally, belatedly cheering for him, a man who continued to learn and improve, which is better than most of us do. And we root for China to behave better in possible epidemics, boo corruption around the world and take a timeout to compare China and America’s trade with the world. It’s this week’s International Need to Know, taking last minute clutch shots on international information and data.*At this point we suspect the Law and Order universe is part of Scientology or some other cult, what else could explain its ubiquitousness?

**By Tuesday, the gym TVs had returned to their regularly scheduled programming of covering separate universes

***Though perhaps the woman in Colorado may understandably not be satisfied

Love in the Time of Corona

The woman we were meeting with, after shaking our hand, began coughing and sneezing, and now we hope our flu shot really worked. But while it is true, as health authorities remind us, that currently the regular old flu is currently killing far more people, the corona virus we warned readers about way back on January 9th is nothing to, uh, sneeze at. That’s partly because China’s honesty with information is a bit like the woman we met with—we’d prefer they’d been more upfront about the problem before shaking the world’s hands.  In the initial stages of the emergence of the virus, China was more interested in controlling the spread of information than the spread of the virus. For nearly a month after it was clear there was a new virus and that it could be transmitted person-to-person, China worked to prevent such information getting to its own citizens (though it appears on January 8 they did inform WHO). Probably due to pressure from China, WHO did not initially assess the risk as “high” but rather as only “moderate.” They continue to prevent Taiwan’s participation with WHO. This is a good illustration of the challenge we discuss in our upcoming book of China’s interest in transforming the international world order into one with Chinese characteristics. Now the heavy government pendulum of China has swung towards ruthlessly controlling movements of people to abate the spread of the virus. Perhaps this is the right course of action, and certainly it is an open question of how prepared the U.S. is for such a disease outbreak, but China’s infusing global organizations the world relies on with their authoritarian culture, is a trend the world needs to recognize and address.

The Good, The Bad and The Corrupt

Last week while you were buying the last N95 mask left on the shelf and switching channels from the impeachment hearings, Transparency International released their 2019 report on corruption around the world. Their index rates countries on their perceived level of public sector corruption on a scale of 0 to 100 with 100 being squeaky clean and 0 as corrupt as a White House impeachment lawyer. Europe was the least corrupt region according to their rankings and Sub-Saharan African the most corrupt. 22 countries have improved their scores since 2012 and 21 countries have gotten worse, including Canada and the United States. The three countries which improved the most are Greece, Guyana and Estonia. Scan the top and bottom ten below for the cleanest and dirtiest countries.

China Vs. U.S. Trade With World

In our forthcoming book about how China has changed and how the U.S. and world should address this, we note the extraordinary success of China’s economy, and how important it is to the world economy. Visual Capitalist illustrates this with a graphic showing how the U.S. was the main trading partner to the world in 1980 and today China is. They note that “…before 2000, the U.S. was at the helm of global trade, as over 80% of countries traded with the U.S. more than they did with China. By 2018, that number had dropped sharply to just 30%, as China swiftly took top position in 128 of 190 countries.”  Trade is also a much larger component of world GDP today at 59 percent compared to 1980 when it accounted for only 20 percent of GDP. When grappling with concerns about the authoritarian nature of China and its interest in infusing the previous international rule-of-law order into one with Chinese characteristics, any strategy must understand China’s economic power and influence. 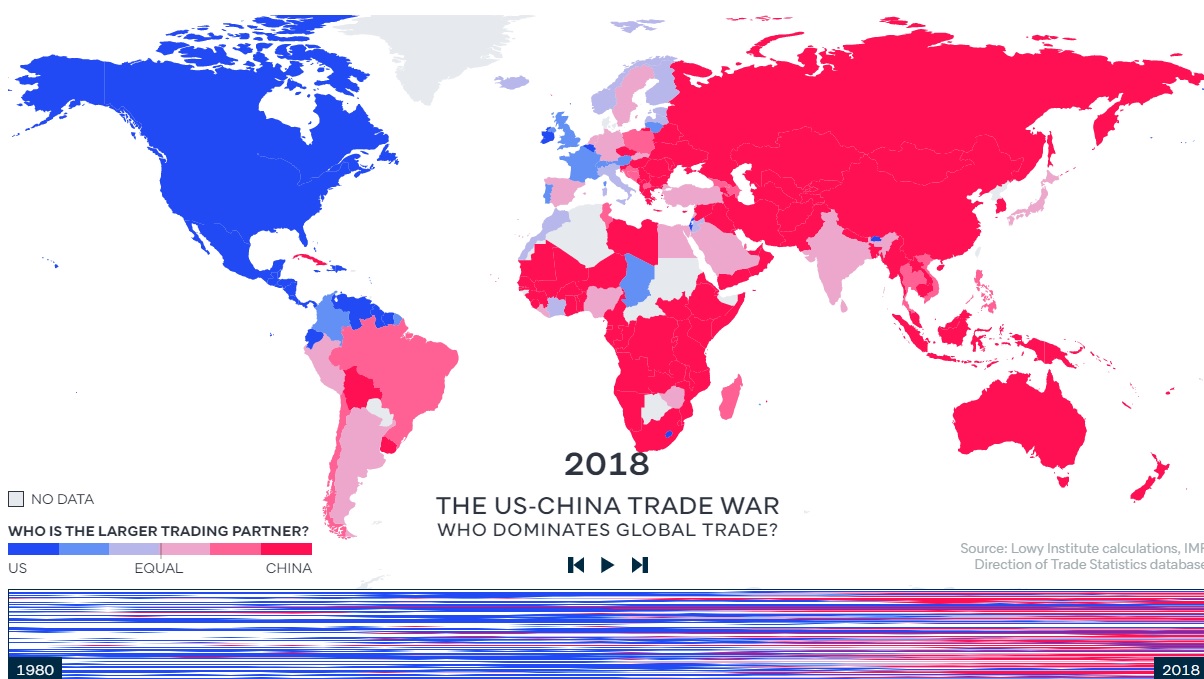 What the ASEAN Elite Think, South Africa is Poorer, and No Free Finnish Lun... Bad News on Hunger, Branding Our World, and Homelessness Around the World
Scroll to top