Last week we were optimistic. This week less so. The U.S. federal government continues to be a disaster abetting a natural one. But Trump has set the bar so low that we are giving state, regional and local officials too much leeway. Not being Trump is not good enough. Most despairing of all, we see no efforts to develop a South Korea or Taiwan-like response–of testing cases, tracing the infected and then quarantining them. This would allow us to start to end shelter in place policies and begin to re-open the economy. Can we get at least one governor or mayor of a major city to take the approach below at their next press conference?

We need to be able to test N number of people per day. Our current capability is H. To get to get to N we are taking the following actions. (list these actions–this is a difficult supply chain challenge but it is doable)

Once we get to N number of tests per day, we can start “testing and tracing” as they have been doing in South Korea. To be able to effectively trace, we are taking the following steps to secure tracers, equipment, create a database, determine how to isolate cases, and ensure they are able to isolate, etc.

We will update you regularly on our progress on this.

Thank you for coming to our press conference. 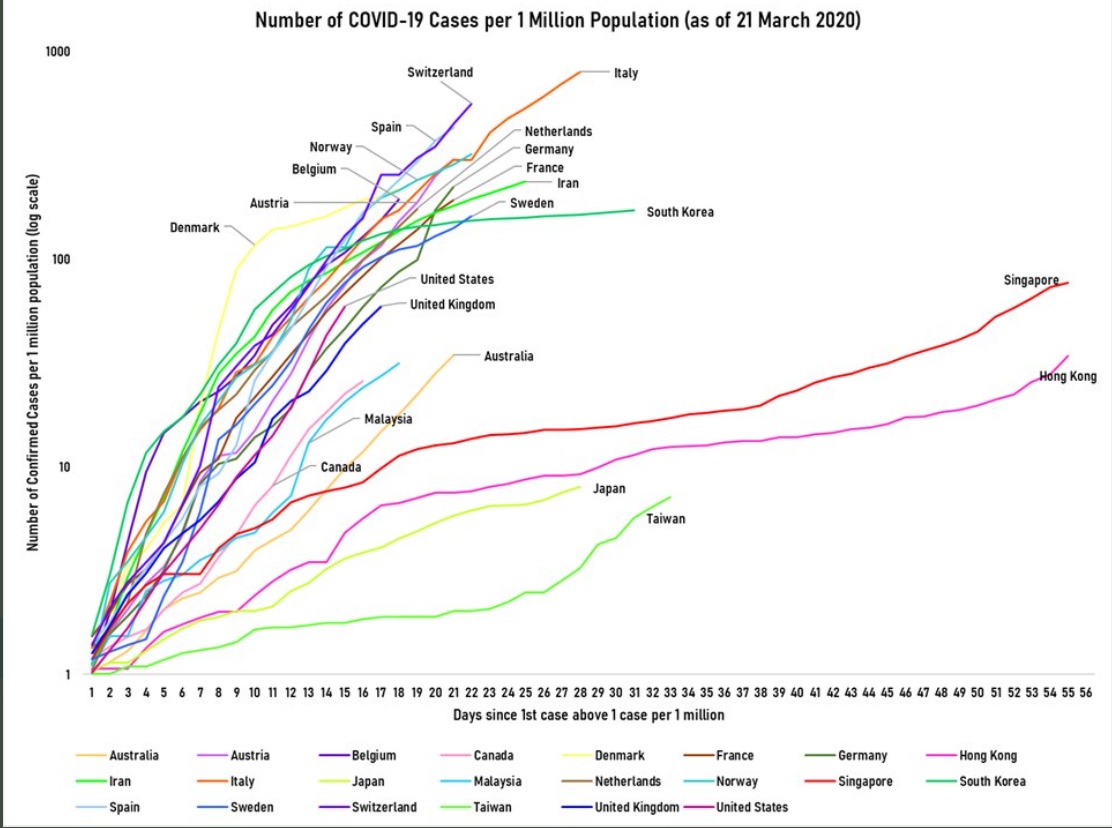 Taiwan’s success and techniques, which we wrote about on March 12, continue to be ignored. Nearly every chart of the pandemic you see online does not include Taiwan (thanks to Roy Ngerng for the one above that does). This is because WHO bans Taiwan and because countries are scared of China. There’s a mid-term solution to the pandemic and Taiwan offers one of the answers.

Without further ado (and lately we have much more ado than usual), here’s what you need to know.

Like It Or Not, We’re All In This Together

One of the many reasons why China and the U.S. sniping at each other during this pandemic is dangerous is that we all need each other. This is certainly true health wise—a virus by nature is transnational—but also economically. As China gleefully trumpets that there are many more cases of Covid-19 outside of China than in, and that things are slowly returning to normal there, they forget that to get their economy back on its feet, they need the markets of the world. And those markets have now collapsed because of the pandemic. For China’s economy, it’s nearly as damaging what is happening in New York, Paris and New Delhi as what is happening in Shanghai, Xiamen and Shenzhen. According to Caixin, “Output contracted in March more than February, work weeks shrank further and hiring declined despite labor shortages…return to work has not meant return to growth for China.” In addition there have been reports that local governments are forcing companies to cook the books to make production look better than it is. The truth is they don’t have enough customers for which to produce. After all, 40 percent of China’s economy is still tied to its exports. And gleeful American policymakers back in February who chortled about the problems in Wuhan might have wanted to stop and think what that was doing to our economies both then and when the virus inevitably traveled to our country. We’re all in this together. At some point we need to start acting like it. 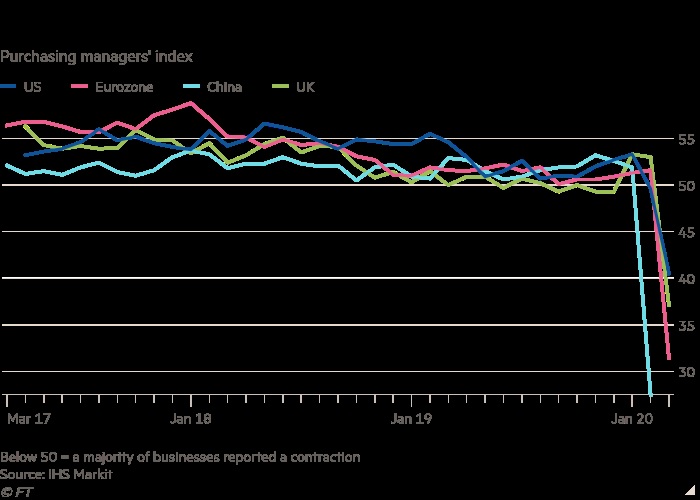 A Note About Supply Chains

All the pieces matter noted the great TV show The Wire. That’s even more true for supply chains, which as we noted a while back, are likely to change radically due to the pandemic. Countries will not be putting all their virus vaccine eggs in one basket anymore. But decisions we are making in one area are affecting supply chains in ways people don’t often understand. For example, understandably air travel has been severely restricted and airlines have smartly responded by cancelling routes—in other words restricting supply. There is talk of the United State closing down domestic air travel. Again, there might be good reasons to do this to slow down the spread of the virus. But we also need to think through how to mitigate the impact on the supply chain. When you are flying to Chicago for a business meeting or to Florida for vacation, below you in the belly of the plane is lots of air cargo, not just your checked bag. Someone we know at an air logistics company tells us, “Capacity is already outrageously reduced but is getting worse by the hour with more airlines cancelling lanes, even on freighter services. Prices are skyrocketing to a level we have never seen before! The only thing moving now is food and any medical supplies requiring the quickest transit time so the ocean freight industry will continue suffering as well.” All the pieces matter. Never forget that. 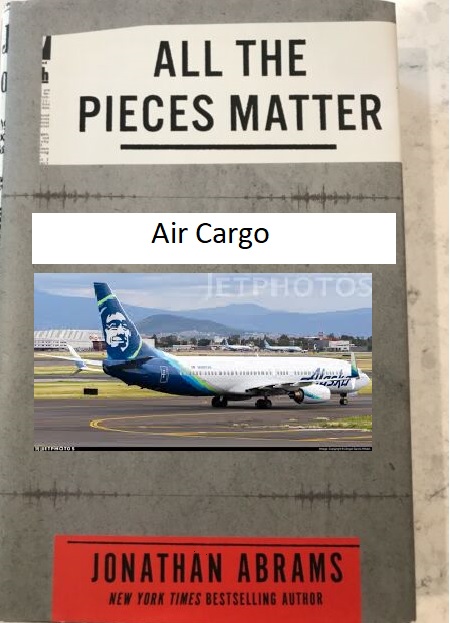 A number of years ago, when interviewing small businesses for a project I was a part of, I heard consistently how hard it is to do business in Brazil. The bureaucracy and corruption made it difficult for these companies to be successful there. That same combination, along with a Trumpian-like president, is bringing Brazil to the brink of Covid-19 disaster. Brazil’s President Jair Bolsonaro who earlier this week called the virus “a little flu” has berated his subordinates for suggesting Brazilians stay at home and businesses close, much less prepare to do test and trace. It’s become so bad that the gangsters of Brazil have taken matters into their own, presumably gun-toting, hands. On Tuesday night, according to Andrew Cesare, Rio’s gangs enforced a lockdown that started at 8 pm that night. The statement the gangs issued read, “If the government won’t do the right thing, organised crime will.” We advocate for better organized crime inside the White House. 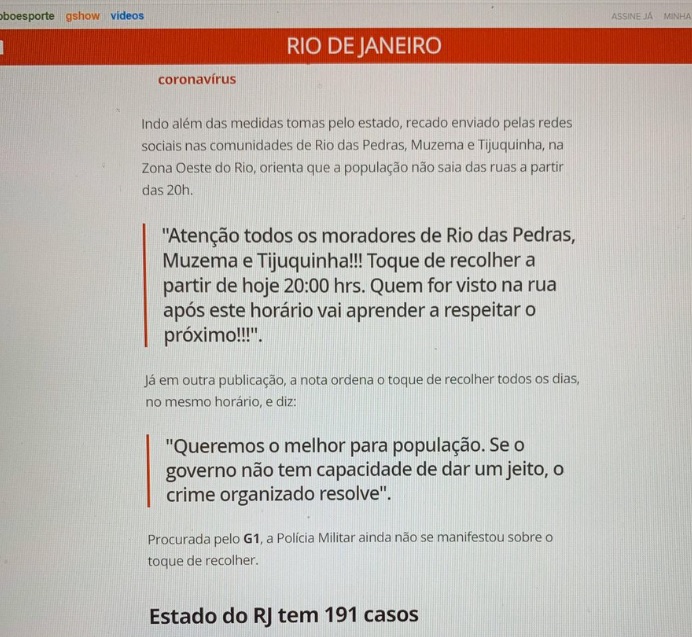 The Trump/Xi Axis of Evil Stupidity, China Propoganda Machine, and the World... Japan Decouples from China, Both China and U.S. Lose, and Covid-19 May Not Have...
Scroll to top