As we locked our bike outside the grocery store, the security guard said to the customer in the wheelchair, “they don’t know nothing, whether the virus came from a lab or not. I tell you it was either the Chinese or the CIA, one or the other.” While we doubt being more transparent on pandemic data will persuade that security guard (we did not, btw, feel more secure with him outside the store), we do continue to call for leaders to be more upfront about data and criteria for policies. Our fair state of Washington is no exception. We continue to assert Washington State leadership ranks near the top in the US in dealing with Covid-19, but they need to do even better. Over a month ago we called for testing and tracing and finally two weeks ago Governor Inslee started talking about it and now the state is trying to hire 800 tracers to get to a total of 1500 (an NPR report claims this is too few). They should have done this well over a month ago. And they are still only talking about quarantine facilities for the homeless. We need to provide quarantine facilities for everyone who is infected and for those who come into contact with the infected (the latter are quarantined until they test negative). There are plenty of hotels available for this. How do we come up with these conclusions? Our second story below shows which countries have been successful not in just flattening the curve but in reducing infections and deaths to near zero. All of these places test, trace and isolate (and require masks). Wuhan did too. I know it’s in vogue to hate China and we ourselves have written an entire book about the challenge of China and what we need to do to counter it. But we must always be guided by data and evidence and both point to the success of China’s central quarantine efforts (ours can be far more humane and without the authoritarianism of China’s). Lockdowns have flattened the curve in most countries. But the goal should be to bring the infection and death rate to near zero. To do that, current evidence points to test, trace and isolate using central quarantine facilities. As we await our leaders response, we isolate ourselves to examine Vietnamese cyber hacking of China, country data on test, trace and isolate, and the state of R&D around the world. It’s this week’s International Need to Know, thinking of the late, great Dr. John on Piano Night while prescribing cures for the world’s blues.

(Last minute update: Late yesterday Governor Inslee released a risk assessment dashboard with explanations and a way to track progress on among other things, testing and tracing capacity and isolation and quarantine capacity. Washington is now very transparent on data and criteria for where the state is and what is needed for opening up various aspects of the economy. Huge kudos to the Governor and his team for doing this. As we wrote above, Washington’s leadership has been one of the best in the country in the pandemic. We asked for improvement and they provided it. They deserve our thanks and admiration. If your state/province/country is not doing what Washington is, ask them why not).

So if you’re a country that suffered from SARS 17 years ago, and word starts to spread of a strange new pneumonia disease spreading in Wuhan, China, and like any rational actor, you don’t trust the information China’s government is releasing, the natural action is to go searching for the real information in China. Which apparently is what Vietnam did in early January when a Vietnamese-tied cyber actor called APT32 hacked into China’s Ministry of Emergency Management and Wuhan’s local government. According to cybersecurity company, FireEye, “The first known instance of this campaign was on Jan. 6, 2020, when APT32 sent an email with an embedded tracking link (Figure 1) to China’s Ministry of Emergency Management.” We assume that the Chinese Ministry’s equivalent of our 84-year-old Mom opened the link allowing Vietnam into the Ministry’s network. Vietnam’s government is denying any cyber hacking of China but Reuters reports that FireEye’s senior manager Ben Read asserts, “These attacks speak to the virus being an intelligence priority – everyone is throwing everything they’ve got at it, and APT32 is what Vietnam has.” China, one of the biggest cyber attackers in the world (but for some reason Americans fixate on Russia), is condemning such attacks on their agencies. Viruses are rampant online and off during the pandemic.

Countries that Test, Trace and Isolate Do the Best

With sports at a halt, instead of reading baseball box scores or analyzing NBA playoff statistics, we find ourselves poring over Covid-19 data from around the world. It is not nearly as much fun, much more scary and certainly more confusing. But it is intellectually stimulating and as you see in our chart below, countries that have a high number of tests per confirmed case have much lower death rates. That’s a correlation without much meaning but what it is showing is that countries with large number of tests per confirmed cases likely have a much more accurate reading of the number of infections in the country. As Our World In Data explains, “A country that performs very few tests for each case it confirms is not testing widely enough for the number of confirmed cases to paint a reliable picture of the true spread of the virus…The large number of tests for each confirmed case in Taiwan and Australia suggests that the number of confirmed cases paint a much more reliable picture of the true number of infections in these countries.” Vietnam* is the true star in this regard and Vietnam appears to have the pandemic under control, as do Taiwan, New Zealand and South Korea. What do those countries also have in common? Each of them have robust test, trace and central quarantine programs. If your state, province or country is not doing that or is not rapidly gearing up to do so, ask them robustly why not. They will not get anywhere close to normal without it. NPR is tracking which U.S. states are prepared to trace as is testandtrace.com. I hope they soon report on which states are prepared to quarantine more intelligently. 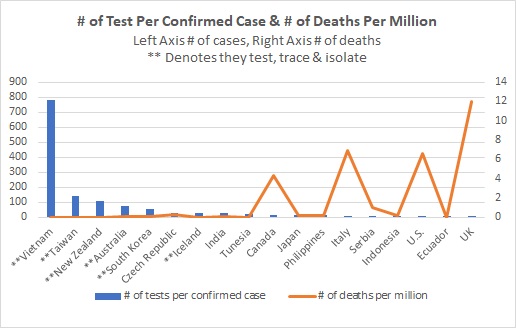 **I often hear critics of test, trace and isolate claim that it can only be accomplished in small countries. Vietnam is not small. It has a population of 94,6 million. Yes, it’s smaller than the U.S. but it is not small. And Vietnam’s economy is about 1/100 the size of the U.S. America has no excuse for not being able to institute test, trace and isolate. If Vietnam can do it, than so can the U.S.

R&D Around the World

In reading some back and forth about whether the U.S. is investing enough in R&D, we became curious about the rest of the world. After all, it is research and development that gets us out of this pandemic. It turns out UNESCO has excellent data on how much countries spend on R&D. In the bubble chart below you can see how much countries are spending on R&D (the size of the bubble), their R&D expenditures as a percent of GDP (larger the further right you go) and the number of researchers per million inhabitants (more the higher up you go). The star is Israel (star of David?) which has the second highest R&D expenditure as a percent of GDP and the most researchers per million inhabitants. This helps explain why Israel has such a successful high tech economy and perhaps is an indicator of why they have thus far** so successfully contained Covid-19. Note other successes such as South Korea, Japan, Finland, Sweden and Switzerland. And, frankly, the U.S. doesn’t look so bad by this measure. But there’s certainly room for improvement and immigration restrictions which cut off talent, drive and innovation, will harm America’s R&D capability in the future. 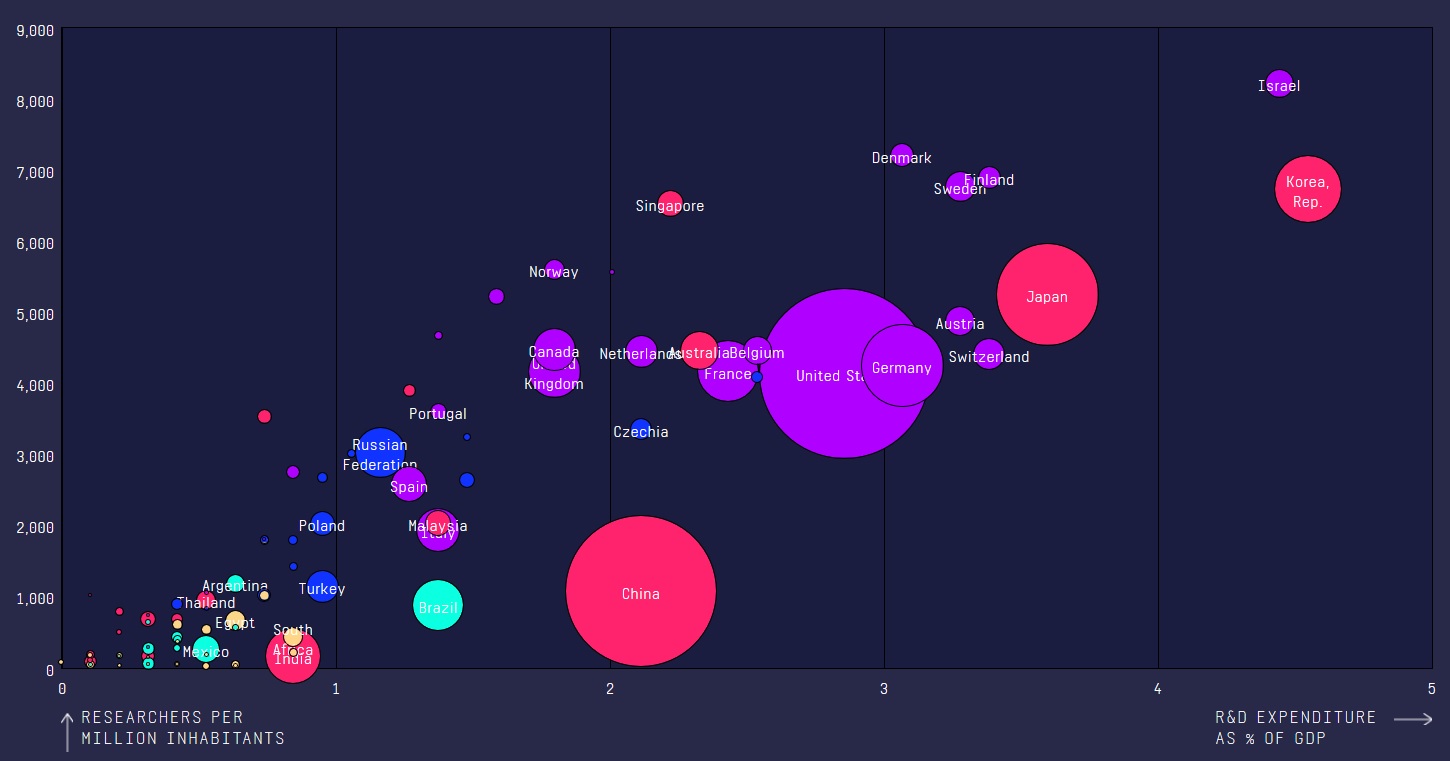