We arrived well before warm ups and as we sat down there was an electricity surging through the arena. When the Chicago Bulls came onto the court for warmups, every single eye was fixated on Michael Jordan. This was in the early 1990s at a Washington Bullets game. I had never seen or felt anything like it before or since.* Just Jordan’s presence on the court, before the game even started, made it feel like Jesus rising from the sports pulpit. As Larry Bird once said after Jordan scored 63 points, “that was God disguised as Michael Jordan.” I honestly don’t remember much about the game but I’ll never forget the crowd and the effect Jordan had on it. We guess that all the people at that game watched the first two parts of The Last Dance that aired Sunday night, ESPN’s documentary on the last championship of the Bulls, but really about Jordan. It was impossible not to contrast Jordan’s authentic desire to win at all costs depicted in the film, that the team’s winning was what was important, to today’s players attitudes. Many of today’s contemporary players want to win but it is about their individually winning a championship, not about the team they play for.  It is interesting that today’s generation is much more fond of collectivism and socialism than Jordan’s, but today’s players are much more assertive about their individual rights than they are about the success of the team. We’re not sure this is a contradiction but rather a different level of knowledge about how the world works, both for the player and the owner. While we ponder what this all means, we set a screen for Italians hating Germany more than China, dribble some more around Sweden and blow a whistle on Jordan in China. It’s this week’s International Need to Know dancing with international data, waltzing with global questions.

The last weekend of April is traditionally the first weekend of Jazz Fest in New Orleans. This year because of the cursed Covid-19 pandemic, Jazz Fest is cancelled (sigh, one of our favorite vacations was attending 2014 Jazz Fest), but WWOZ is replaying past highlights all weekend–we are listening to Kermit Ruffins 2015 performance as we type.

Like a couple of high school students hopped up on hormones, China and the United States are in a battle for love in the time of coronavirus. As we noted a few weeks ago, both countries could come out of the pandemic less popular. But a recent poll of Italians shows China achieving some PR success there. In a poll conducted March 20 – April 12, 52 percent of Italians listed China as a friendly country compared to only 17 percent listing the U.S. as a friendly one. In a sign of perhaps just how difficult Germany has been on EU economic relations dating back to the financial crisis in 2008, 45 percent of Italians think of Germany as an enemy country. China has tried to leverage its aid to Italy for good PR, even though much of it turned out to be damaged goods. But how the media covers these issues is also important. According to the Atlantic Council, “The news of the cargo flight from China has had more than triple the visibility compared to the announcement by US President Donald J. Trump to send $100 million of assistance to Rome.” The current U.S. Administration has severely damaged America’s credibility around the world, which is a boon to authoritarians. But even so, news organizations need to cover the facts on the ground, not just a distaste for an incompetent, failed U.S. Administration. 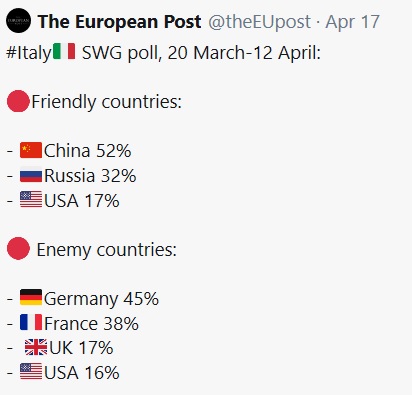 We Still Need to Talk About Sweden

Two weeks ago, we noted we must grapple with Sweden’s only partial lockdown policies. Even as we wrote that the world needs to keep an open mind about Sweden’s approach, we wrote, “Perhaps a week from now Sweden will be a catastrophe.” Two weeks later, Sweden is not a catastrophe. Maybe it will be in the future but not yet. As you see in the first graph below, Sweden’s death rate may have peaked. It is true that Sweden has thus far done worse than its Scandinavian neighbors (see second chart) but it is still doing better than many other European countries. There could be many reasons for this—as we wrote last week, data surrounding this virus is remarkably heterogenous.** And, it is way too early to make conclusions one way or another about Sweden. As noted, Finland and Norway have much better infection and death rates, but what about 6 months from now? 12 months from now? 18 months from now? (will there is an effective treatment or vaccine developed and distributed before then?). Sweden is, of course, different than the U.S, Italy and other countries, as our favorite named person of April Dirk Schwenk points out. We would not have adopted Sweden’s approach but two weeks after we first wrote about it, we still can’t make definitive conclusions. 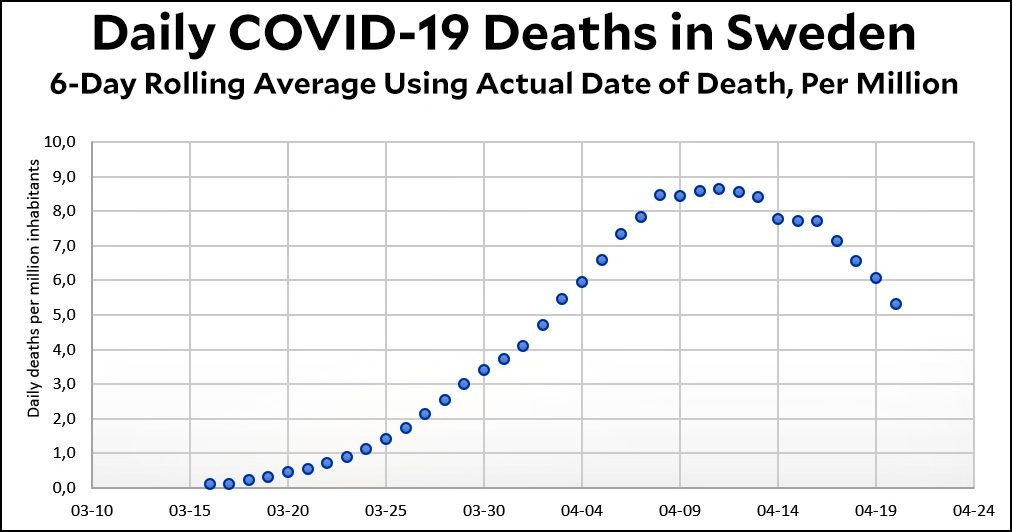 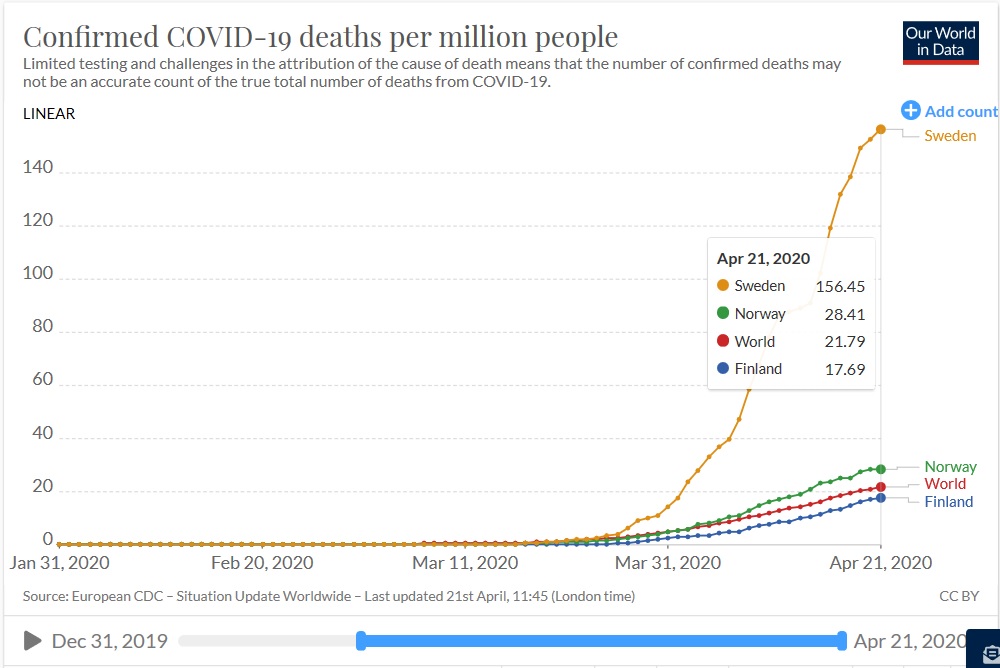 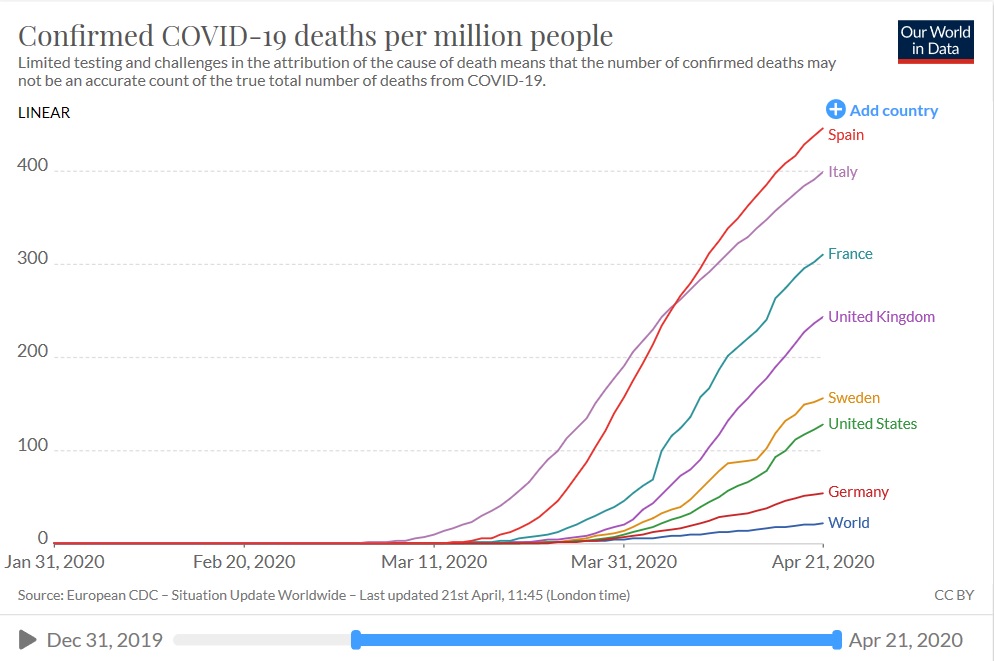 **For example, what are we to make of Bali, which has incredibly low rates of infection and death despite hundreds of thousands of Chinese, including from Wuhan, visiting there in January? There is so much we don’t yet understand about the pandemic.

Taking the Air Out of China

As we noted above, on Sunday ESPN aired the first two parts of a new documentary on his Airness, Michael Jordan, bringing much needed content and salve to sports fans all over the world. The NBA is huge in China despite the government’s authoritarian rebuke to the Houston Rockets’ Daryl Morey calling for freedom in Hong Kong.*** Michael Jordan is also big in China and has been fighting for years to protect his trademarks. He won a partial victory there last week when China’s Supreme Peoples Court (note that whenever an authoritarian government uses the word “people” in an organization’s title, it has nothing to do with people like you and me) ruled that “Qiaodan Sports, a company based in China’s southern Fujian province, had illegally used Jordan’s name in Chinese characters.” But at the same time, the Court ruled the company can continue to use a silhouette of Jordan that is the Qiaodan’s logo. The ruling on his name overrules two lower courts judgements. How this all works in practice in China will be telling. China continues to have a very closed economy and as we’ll likely talk about next week, there is increasing pushback from the world. Jordan’s competitiveness is on full display in the documentary, but can he dunk on China? 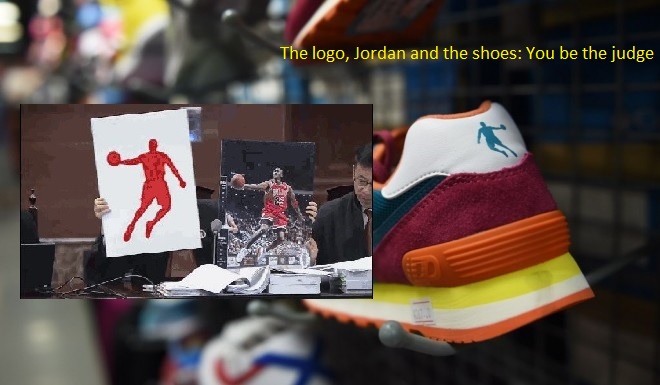