SE Asia Conundrum, Emptying Room and Hal Is a Young Woman on CGTN

My wingtips clip-clopped down the marble floor of the Cannon Office Building, trotting like a proud pony in one of the people’s houses of power. A middle-age black man not much bigger than me, but a giant all the same, came walking down the adjoining hall towards his corner office right next door to the office of the Congressman I worked for. He came up and began chatting with me. Even if I didn’t know who he was, and I did, anyone would know he was an elected representative by the small congressional pin in his lapel. I was in my mid-twenties and unaccustomed to members of Congress stopping in the hallways to talk with me. We had recently moved into the office, new to the neighborhood so to speak, and he just wanted to say hello to the staffers. We chatted for a while, about nothing particularly significant, just his asking about myself and me hemming and hawing and occasionally asking him a question. He often said hello when I saw him in the hallways after that. He was a man who had been in the room as people are prone to say nowadays, although he was perhaps most famous for being on a bridge and being savagely smashed on the head for it. It is rare for someone to be so comfortable in the room, on the grand stage, and in the ordinary hallways. What a great and decent man he was, in both historically large and in small everyday decent ways. RIP John Lewis. As we walk down our hall of memories we peer into the messy attic of Southeast Asia Covid-19 data, look into the empty room of world population and stare into the dark corners of Hong Kong’s National Security Law. It’s this week’s International Need to Know, throwing out the first pitch of international information and data.

The Conundrum of SE Asia

The U.S. has become the laughing and crying stock of the world for its mishandling of the Covid-19 pandemic. Electing a mentally ill, racist, brain-stunted man as president has consequences it turns out. Many countries have contained the virus and we have frequently pointed them out and praised them, including Vietnam. Despite being a developing country, Vietnam locked down quickly, and instituted a successful contact tracing and central quarantining system. It worked. It’s what the U.S. should be doing. At the same time, it is strange that all of southeast Asia is doing so well. Look at the chart below containing the seven-day average of deaths per million in Vietnam, Cambodia, Laos, Thailand, Myanmar, and Germany. Remember that Germany has been held up as a success story and yet its deaths are magnitudes worse than any of the Southeast Asia countries, not all of whom locked down and contact traced like Vietnam did. Many people, including in this space, have noted that countries which experienced SARS were more prepared for this pandemic and have fared better. And yet, we wonder if something else explains the vast difference in outcomes. There are different strains of the virus and apparently the U.S. and Europe dealt with a more infectious version. A very speculative research paper we saw via Marginal Revolution, posits “a low-virulence strain (LVS) began spreading a few months earlier from China, providing immunity from the later emerging known SARS-CoV-2 high-virulence strain (HVS).” We have no idea if this is true but we continue to believe the wisest sentence we’ve written in 2020 was on March 12 in this space: “we are willing to wager that much of what we think we know will turn out to be wrong in the light of longitudinal studies and time.” 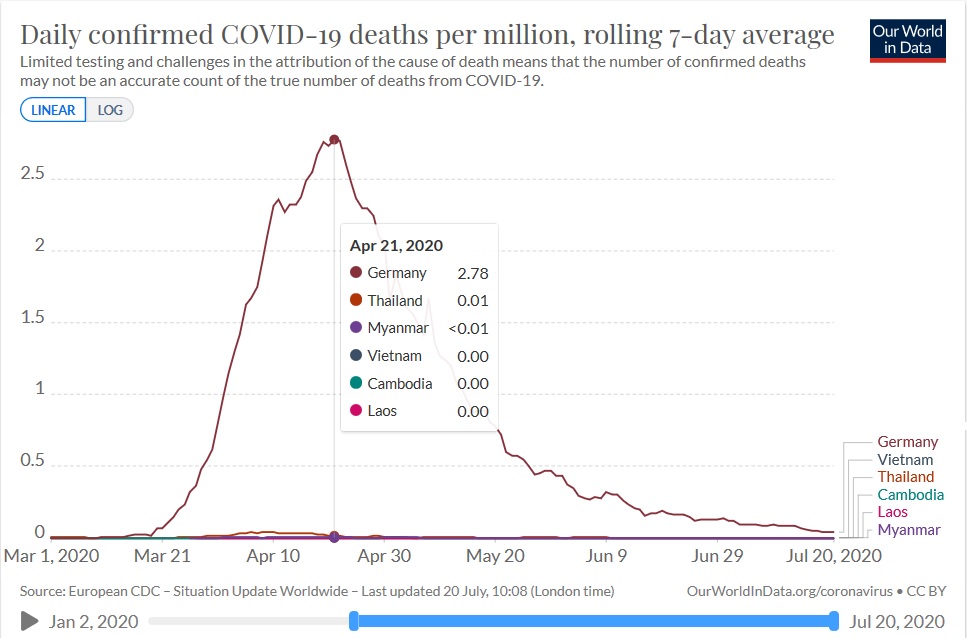 We are growing accustomed to empty rooms thanks to the Pandemic. We arrive at our office building and no one is there. We walk by nearly empty restaurants, bars and salons. But is the world itself emptying? A new report by the University of Washington’s Institute for Health Metrics and Evaluation* examines fertility rates around the world and projects that population will peak at 9.7 billion in the year 2064 before falling to 8.8 billion by the year 2100. Current population is 7.8 billion so perhaps the world is not emptying but just peaking sooner than predicted. The reason for this early peak is because fertility rates have fallen to 2.4 children per woman, down from a peak of 4.7 in 1950. The IMHE folks project the rate will fall below 1.7 by 2100. A rate of 2.1 is needed to sustain the current population. As we noted in last week’s article about productivity, the one place where population will continue to increase for the next few decades is Africa. But even there IMHE projects that will peak by the end of the century. Nonetheless, in the meantime Nigeria would grow to 791 million** while China would only have 732 million by 2100. There are advantages to a smaller population but it will also put a stress on economic growth (especially with lower productivity rates) and social systems (there will be many old people but few young to support them). Of course, these projections may be off. For one, perhaps advances in medical science will mean people live longer. Or perhaps some unforeseen factor will cause a baby boom. But, it is also possible our species has peaked population-size wise. 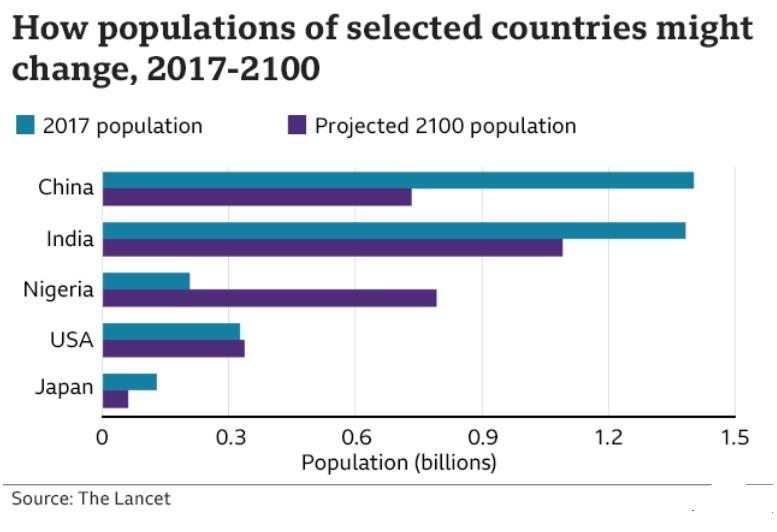 *Note  that IHME’s projections for the pandemic were not particularly accurate early on.
**There is much suspicion of Nigeria’s current population count. So there is plenty of reason to be skeptical of IMHE’s Nigerian projections.

HAL is a Young Woman on CGTN

We are not easily frightened by scary movies. We can watch The Shining, Midsommar and the latest Star Wars movie (Ed: how’s Star Wars scary? INTN: scary bad) and not bat an eye as we sleep soundly at night. But CGTN, one of Beijing’s international English news channels, recently posted a short video (see below) explaining that the New National Security Law in Hong Kong is nothing to worry about. The female anchor, who might as well be HAL telling us, “This mission is too important for me to allow you to jeopardize it,” is sun shiningly alarming. She cheerily tells us the law “applies to all people inside and outside the city…if you participate in activities threatening the security of Hong Kong.” So, theoretically International Need to Know could be breaking the National Security Law if we wrote something like “Hong Kongers should be free to assemble, say what they want and elect people to govern themselves.” But, of course, we would never write that. At the end of the video, with a smile and happy face, she notes many opposition party members moved to western countries before the law took effect. She says, “I suppose they are the group of people who should be really concerned about the law…if they continue subversive activities over there.” Her voice lifts an octave on the word “there” as if she’s about to open your door and throw you into a van Portland, Oregon style. We look forward to when the world pendulum begins swinging back towards liberty. 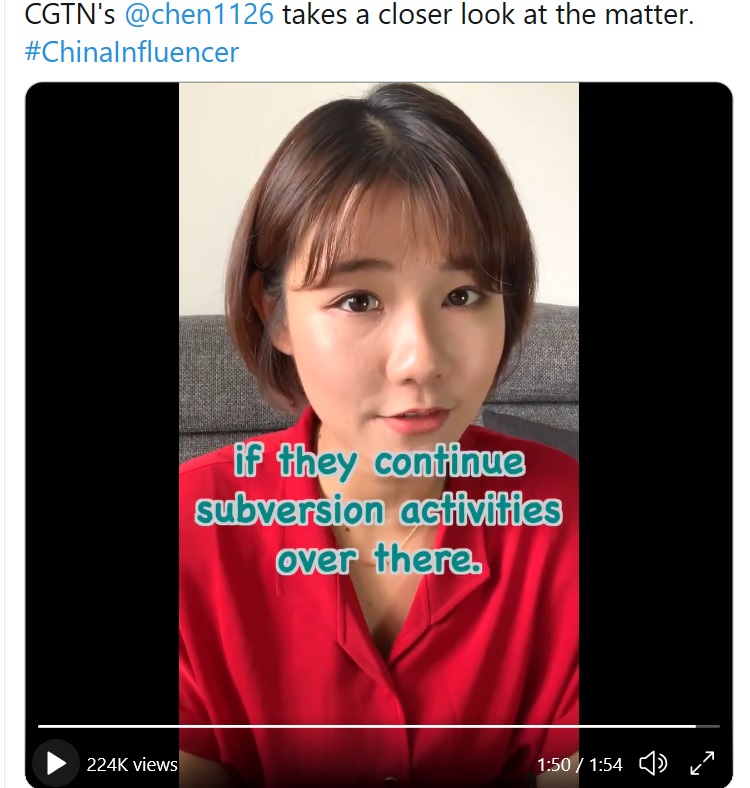 Where Did the Productive People Go, China Rot Deepens, and The Rock of Ages Damn the Waves, Taxing Malware, and Dam Robots
Scroll to top