We get the pandemic is a big story. And so is the U.S. presidential election. There is no denying that the sustained, massive protests to reform a militarized police disproportionately directed at Black people demands lots of media attention. China’s attempted genocide against Uyghurs should be getting more worldwide media coverage. But if we were writing a history book about 2020, the apparent discovery of evidence of alien life forms would be our main focus. In fact, it would be the number one event in our lifetime. And yet very few are paying attention at all, despite coverage in the New York Times, to reports that the U.S. military has found and is secretly storing advanced aerospace technology seemingly not constructed by humans. Within this huge story is a smaller—but we argue revealing—tale that is emblematic of modern America’s failures.

The NY Times article notes that the finding of high tech alien aerospace equipment is highly classified: “Numerous associates of the Pentagon program, with high security clearances and decades of involvement with official U.F.O. investigations, told us they were convinced such crashes have occurred, based on their access to classified information. But the retrieved materials themselves, and any data about them, are completely off-limits to anyone without clearances and a need to know.” Why? Why does the U.S. Government get to decide who should be aware of this unidentified technology, this presumed evidence of alien life forms? Ever since we worked in D.C. and had top secret security clearance, we’ve witnessed and worried about the over classification of information by the government. The impulse to “protect” the public from information is at the root of or a contributing factor to many of our problems–from health officials early in the pandemic claiming that masks don’t work because they were worried people would horde masks from health care workers, to the lack of collection of police use-of-force data. Perhaps the info about the discovered technology is classified because, unlike what is reported in The New York Times, our government knows it is made by some other country and not by alien life forms. If so, tell us and reveal the information. If not, make this technology and evidence available to all to examine and draw their own conclusions. As we wait for them to do so, Scully-like we reveal the pandemic waves washing ashore Europe, try to institute a tax on Chinese government malware and welcome the dam robots. It’s this week’s International Need to Know, celebrating Satchmo Week in New Orleans from a safe distance. 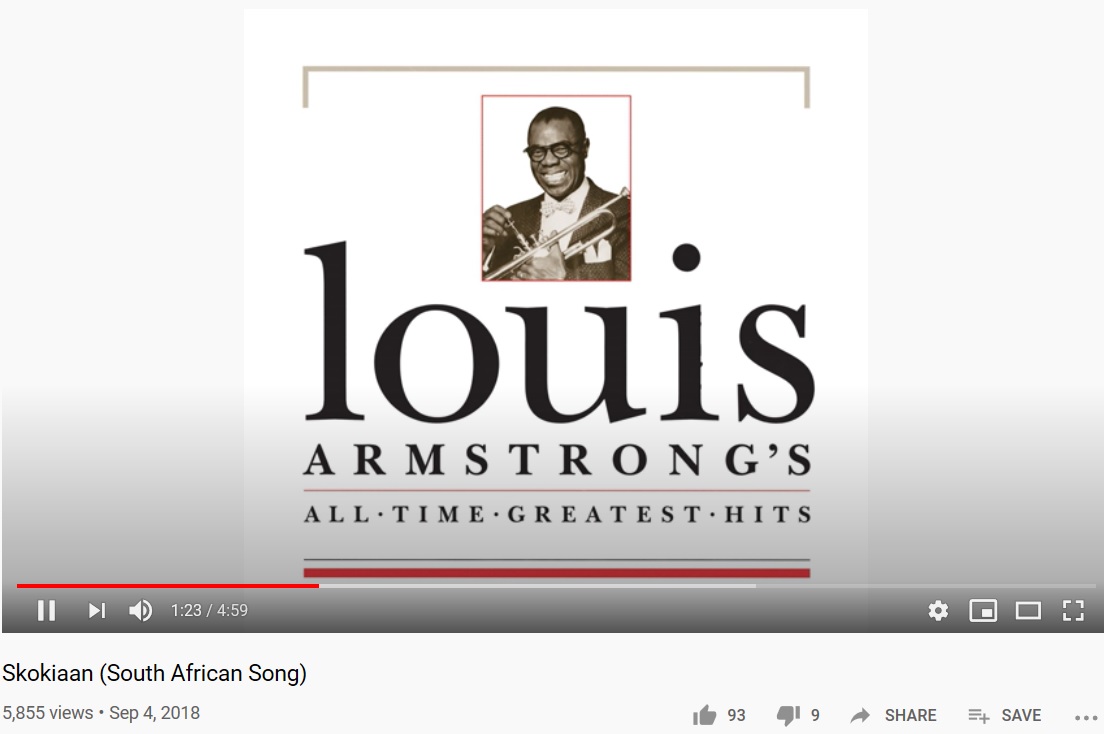 We’re not a fan of the wave at sporting events. We’ve grown to be amused at Katrina and the Waves. But second waves of pandemics?—Katrina is walking on eggshells at the thought of them. Unfortunately, it’s possible Europe is beginning its second wave. The chart below shows steady increases in Covid-19 cases in Germany, France, Belgium and Spain. Over the past week, daily cases are up 20 percent in Europe as a whole. Of course, Europeans are amateurs compared to the Robert Kelley Slater, Bethany Hamilton and Andy Irons (I’ll take famous surfers for 500, Alex) that are Argentina, Brazil and the U.S., who are all riding steep waves of Covid-19 infection increases. But the slope in Europe is also upwards if not at such a steep rate. Europe has not squashed the virus like countries in Asia did and as we speculated last week there may be reasons other than inadequate non-pharmaceutical interventions for this. Nonetheless, these increases are worrisome both for health and economic reasons, which during a pandemic are really the same thing. 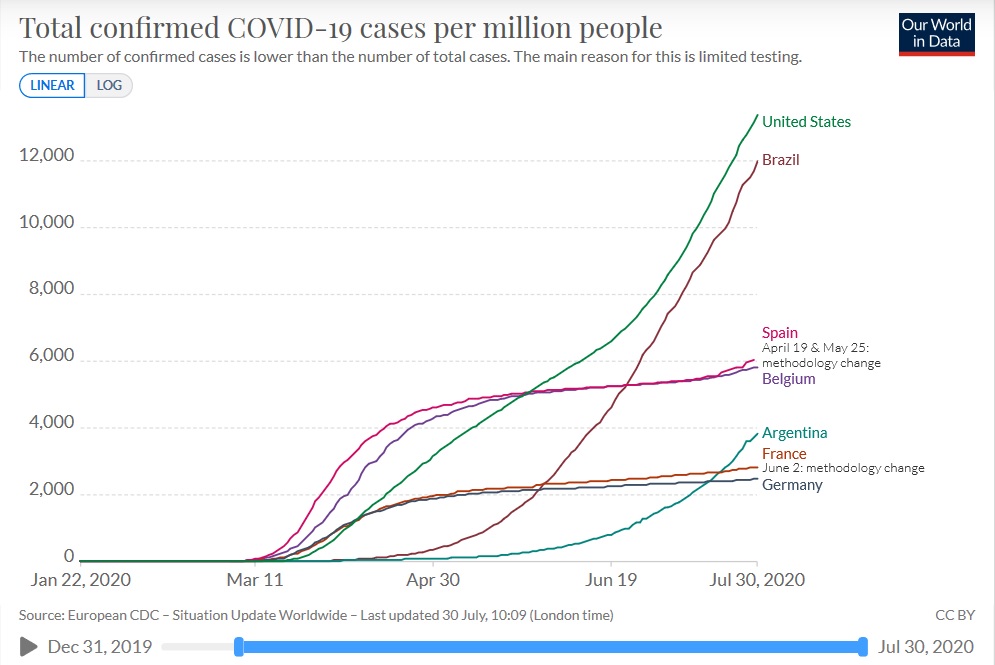 Southeast Asia Covid-19 Update: Last week we wondered if a different virus strain helps explain how Vietnam, Cambodia and other SE Asian nations so successfully quashed the virus. This week bring news of a new, small outbreak in Danang, Vietnam. Interestingly, “the strain, which had been found in Bangladesh, Britain and Ireland, appeared to be more contagious than other strains detected in Vietnam.” If this is true, this will be a good test of how much of the success of Vietnam’s containment is due to their smart policies and how much is due to previously working with a less infectious virus strain. Stay tuned!

In China, the Trump Administration has stumbled upon a real life problem like a drunk running into an overly aggressive and potentially violent traveling salesman. But also like a drunk, instead of coming up with a rational, strategic approach to dealing with the problem, instead they vomit all over it. Closing consulates, banning Chinese (and other international students) from studying in the U.S., and alienating allies while asking them at the same time to be tough on China is not a coherent strategy. But there’s no denying the challenge of China in big ways and small. Recently, for example, Ars Technica reported that “security researchers exposed a sinister piece of malware lurking inside tax software that the Chinese government requires companies to install.” At least two different types of malware have been found that allow the government to install programs and make changes to users’ computers. All companies registered in China are required to use this value tax paying software, which means the Chinese government can easily spy on all companies. We have to assume that most companies operating in China understand these tactics occur and take precautions to deal with them. Still, it’s a labyrinth of corruption, spying and malfeasance that one must navigate to do business there nowadays. It could drive a person to drink.

The Robots Will Come For Your Floods

Just over a month ago we warned about possible structural deficiencies with the Three Gorges Dam in China. The Dam still stands. But flooding has grown worse since we wrote that story and more people are expressing concern about the dam. In Japan, where we are unaware of any faulty dams, plans are underway to build a new dam almost exclusively using robots. Robotics and Information Magazine in an article written by a human named Mai Tao, reports that one of the big five construction companies in Japan, Obayashi Corporation, is building a dam on the main island in Mie Prefecture that will use automated cranes, concrete pouring robots and other automated machinery. However, all of these machines will be closely monitored by human workers. The company claims that productivity will increase by 10 percent because of the robots. Obayashi’s head of technology believes in future projects “we may be able to cut building time by 30 percent.” Maybe robots will be used to address any problems with Three Gorges Dam. 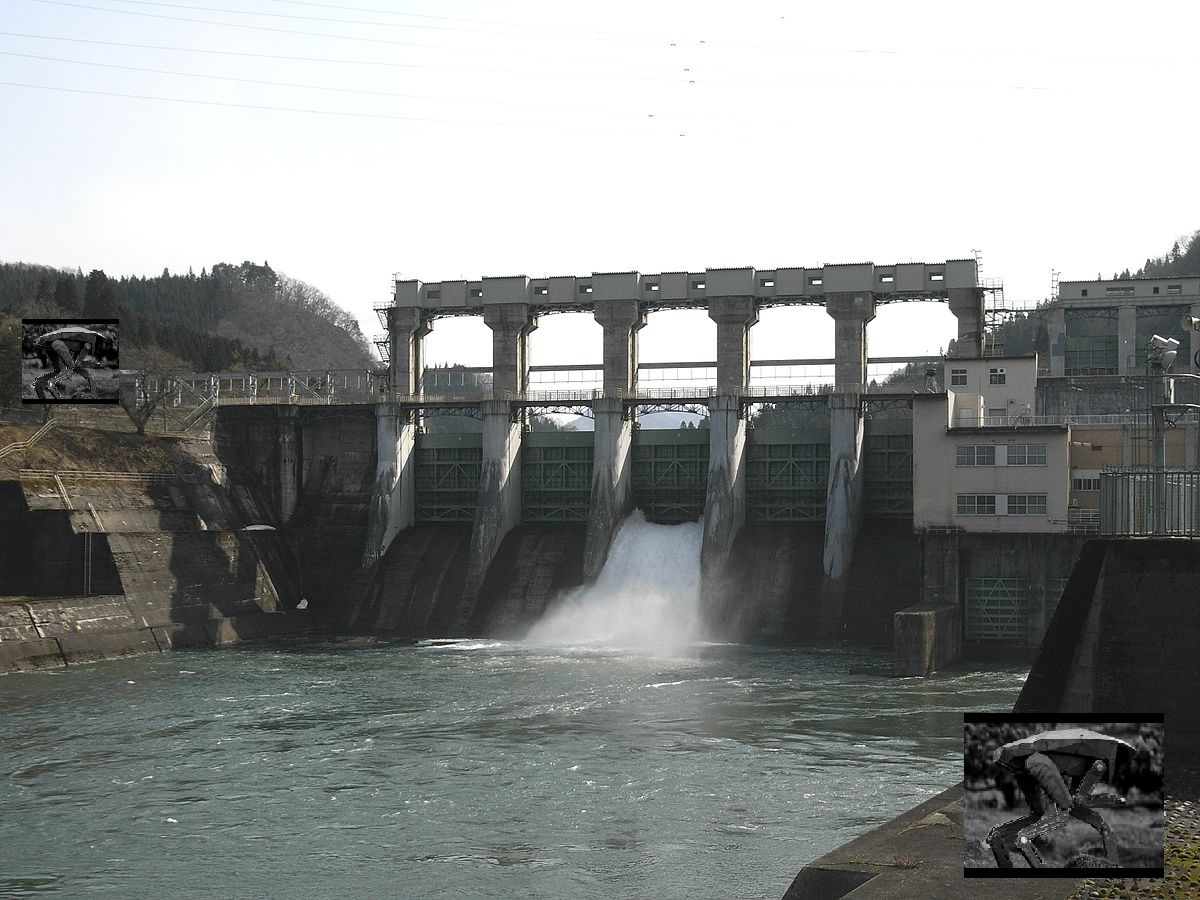 SE Asia Conundrum, Emptying Room and Hal Is a Young Woman on CGTN Unfavorable Views of China and the U.S., World Air Conditioning and Trade Helps...
Scroll to top