After a certain point of volunteering for test and trace organizations, trying to convince people that central quarantine sites are what works, and keeping our own data in a self-created Excel spreadsheet because we are not satisfied with official stats, we have tired of hitting our head against the pandemic wall. And so instead, recently we hit a hammer against nails as we tried to finish the hobby house structure in our backyard. We trimmed out the interior of six windows using only a This Old House Youtube video, a rented table saw and a hand plane. And while Tommy from This Old House would have appreciated the sixth window we completed more than the first, we were definitely better than Gene Hackman’s character in Unforgiven. Next we paint the windows and install a floor. The hope is the hobby house will function as a workout room once summer is over and outside bike riding is more difficult in the expectation that our fellow Americans, or at least a critical mass of them, will not come to their senses to actually contain the virus, making going to a gym impossible. We’ll also use the structure as a music room where we can practice the trumpet without bothering cats or spouse, and learn to play the keyboards. And it will be a library also. A sort of man cave for an international data and information nerd. As we pick out wainscoting, we note Europeans’ views of China, project the increase of air conditioning around the world, and laud the effect trade has on women. It’s this week’s International Need to Know, worried that if New Orleans musicians asking you to “Mask Up” won’t work, than we truly are doomed. 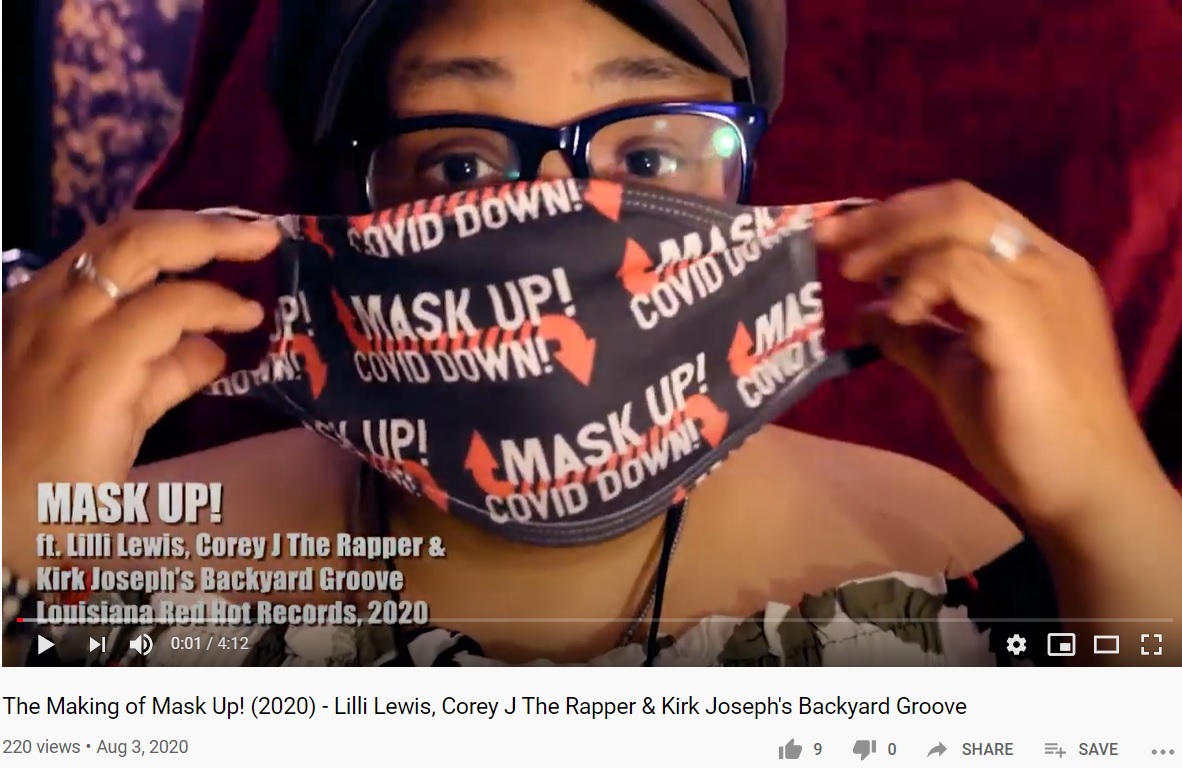 To Know You Is Think Unfavorably of You

Back in March we speculated that both China and the U.S. may come out of the coronavirus pandemic worse off than before. China would fare badly because of its overreaching aggressiveness around the world. The U.S. because of the negligent homicide conducted by its current president. We still think that the standing, power and brands of both China and the U.S. will continue to ebb given the way the two governments continue to handle the crisis—China has contained the virus but through it’s strident aggressiveness has mishandled virtually everything else. The U.S. has mishandled the virus, and much else. People in Europe have taken notice. Both China and the U.S. fare badly when Europeans are asked, “How has your view of them changed during the coronavirus crisis?” Interestingly, Bulgarians views of China and the U.S. have either stayed the same or grown more favorable compared to their European neighbors. Bulgarians, for whatever reason, view the world differently than other Europeans–and, of course, are ensconced in massive anti-government protests at the moment. But for essentially every other country, more Europeans look at China unfavorably since the crisis, as well as at the U.S. Bad actions tend to have consequences we are learning, if ever so slowly and painfully. 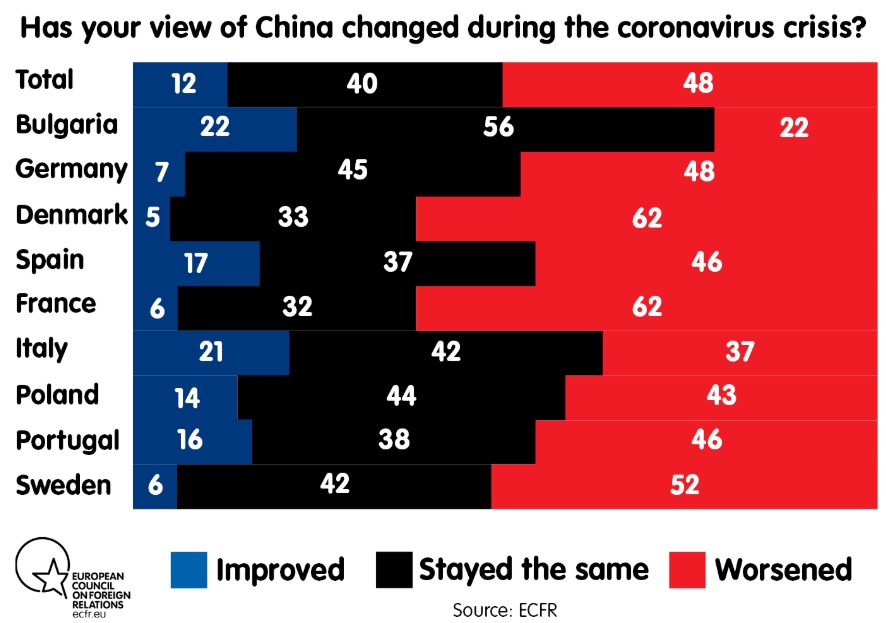 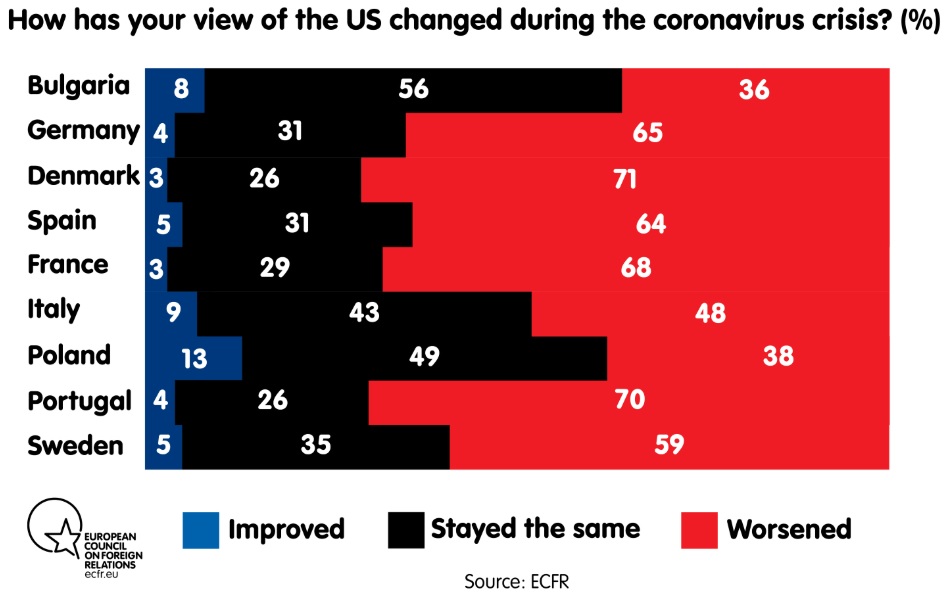 A few years ago when getting a new furnace, we installed central air conditioning. The INTN spouse, who was born and raised in temperate Seattle and thus unable to withstand temperatures outside of a band between 60 and 70 Fahrenheit, believes it is the greatest thing we’ve ever done. But most people around the world do not have air conditioning and they live in areas where it really would dramatically improve their lives (see first chart below). Over the next 30 years, presuming these countries continue to develop economically, they are likely to add lots more air conditioning capacity. That will have implications for energy use and climate emissions, as the second graph below from the International Energy Agency’s The Future of Cooling Report shows. Countries such as Mexico, Brazil, Indonesia and India all have a small percentage of households with air conditioning. Even China is only at about 60 percent. The second chart below shows projections through 2050 estimating that two-thirds of households will have air conditioning. The report states that “China, India and Indonesia will together account for half of the total number.” But that means energy use for cooling will triple “consuming as much electricity as all of China and India today.” The IEA says the increased use of energy for air conditioning can be greatly mitigated by people using energy efficient cooling. Adopting energy efficient cooling would reduce the increased energy demand by 45 percent. Increased efficiency is important but we will also need to generate more energy via solar, wind and perhaps nuclear. 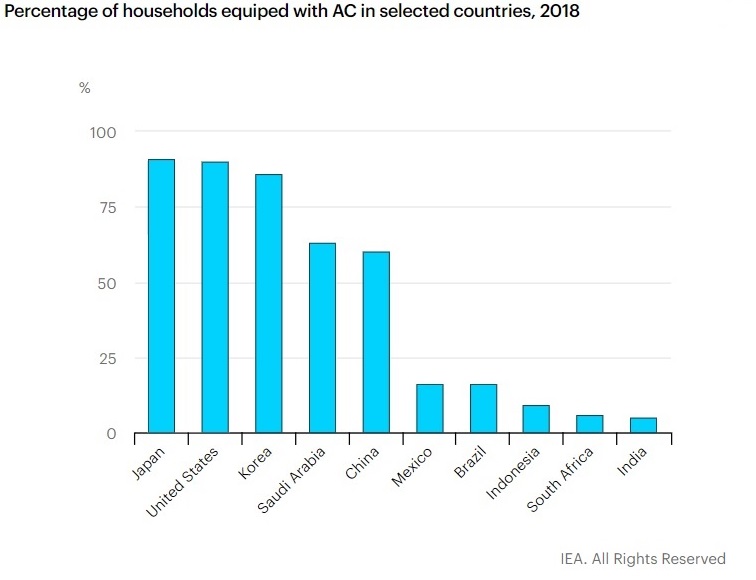 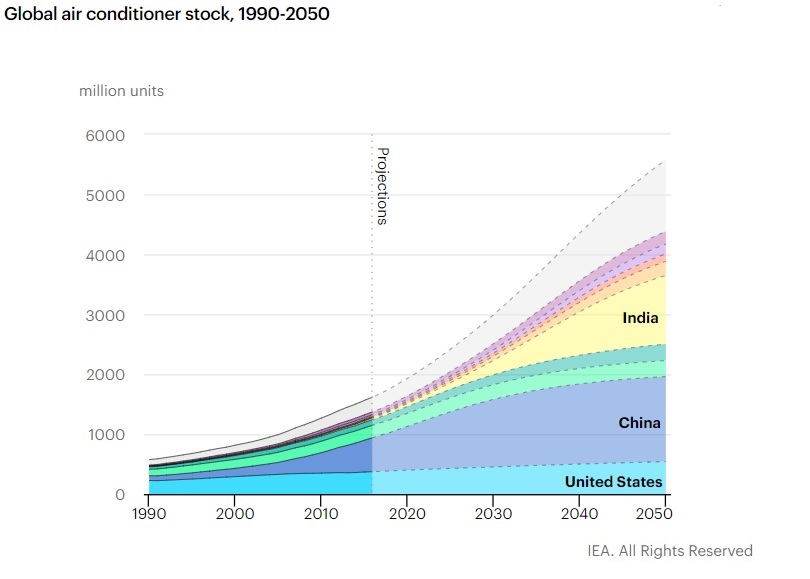 We have often extolled the virtues of international trade during our career—perhaps we are a sort of rational Billy Graham for the trade part of globalization. Of course, we are an evangelist beset by a bunch of anti-trade heathens. But we continue to learn about the virtues of trade, including how it helps women. According to a new study by the World Bank and World Trade Organization (remember WTO?), “In developing countries, women make up 33 percent of the workforce of exporting firms compared with just 24 percent of non-exporting firms.” Not only that but the pay and benefits is better for women working for exporters. Of course, that’s true for all people. Exporting companies on average pay more and provide more benefits. As developing countries increase their manufacturing exports, this study finds that “women increase their share of total manufacturing wages from 24% to 30% through a combination of increased employment and higher salaries.” Trade has been on a branding losing streak for two decades, since the riots in the streets of Seattle during the WTO meetings. It all culminated in the trade wars promulgated by the current U.S. Administration, which ironically, according to polls, has finally made trade more popular. There are no utopian policy outcomes in this world and increased trade caused challenges as well as benefits, but overall trade has been good for the world and we now know, is especially helpful to the cause of gender equity.

Damn the Waves, Taxing Malware, and Dam Robots Do We Still Need to Talk about Sweden, TikTok & WeChat and Where Its Safe...
Scroll to top