Do We Still Need to Talk about Sweden, TikTok & WeChat and Where Its Safe to Retire

The NBA and Seattle Mariners are back and we’re enjoying it. But others are trying to suck the enjoyment right out of us. We were listening to a podcast about the NBA recently and the hosts said watching NBA games made them feel guilty because it shows how the rich with all their resources can get through pandemics unscathed while the rest of us suffer. The NBA can put people in a bubble, get test results in less than 24 hours and keep their players safe and we can’t, they lamented. The guilt of the podcasters is misplaced.

The restart of the NBA, baseball and other sports is providing models from which we can learn what works and what doesn’t and in turn apply to other labor and life situations. And the NBA model is so far the most successful. How the NBA conducts a bubble may not be replicable for all work situations but it provides at least some lessons. And how they are able to get enough tests and results in less than 24 hours is replicable if we’re willing to spend the resources to do so. And while providing such testing will be expensive, it’s likely to be on the order of many magnitudes cheaper than closing the economy. Plus, according to Dr. Scott Gottlieb, the NBA’s efforts are leading to new breakthroughs in testing technology.

So stop being a mope and start enjoying—and learning from—the NBA’s restart—just don’t root for the Lakers. That would be something to feel guilty about. We are completely guilt-free in again examining the Swedish model, providing context on WeChat and TikTok, and letting you know which country’s pension plans are safe. It’s this week’s International Need to Know,the vice presidential candidate of international information and data.

Do We Still Need to Talk About Sweden?

We’ve traveled to Sweden a number of times and found it a fine and dandy country. But we wonder at all the people holding up Sweden as a counter-example to closing down an economy in containing Covid-19, especially last week when GDP numbers for the second quarter came out that showed Sweden doing better than parts of Europe. Let’s look at the data and decide for ourselves. In the first graph below you see Sweden’s deaths per million is five times higher than Denmark and ten times higher than Finland, its geographic neighbors. Its death per million is also higher than France and Germany though below the U.K. In weekly deaths, although its numbers have gone down, Sweden continues to have ten times the number of deaths currently than Denmark and Finland. It is, however, doing much better than the much praised Germany and better than France. Economically, it’s true that Sweden is doing better than that of many other parts of Europe, or at least less bad since Sweden’s economy has contracted each of the last two quarters. I can’t find second quarter numbers for Denmark and Finland but in the first quarter, Sweden fared worse than Finland but better than Denmark. Perhaps if there is a second wave this fall in Europe, Sweden’s overall number of deaths from Covid-19 will end up better than much of Europe, and perhaps even better than Finland and Denmark. But that’s mere speculation. It’s also possible some of the new antibody treatments will come online by then and by January there might be an effective vaccine so that second wave will be contained. In which case, Sweden’s approach will not look good whether measured by number of deaths or economic growth. 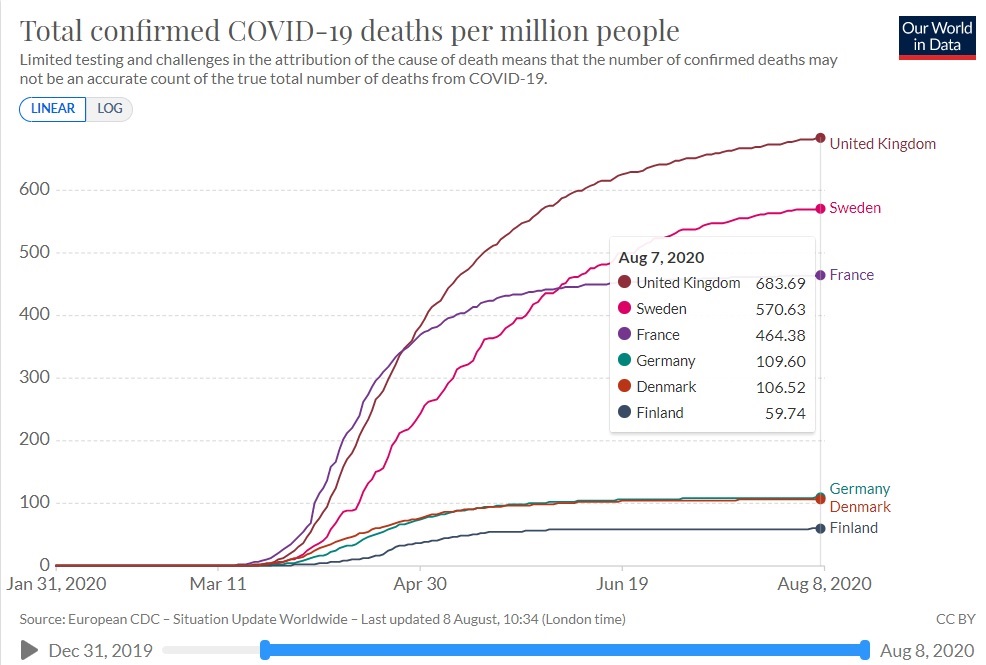 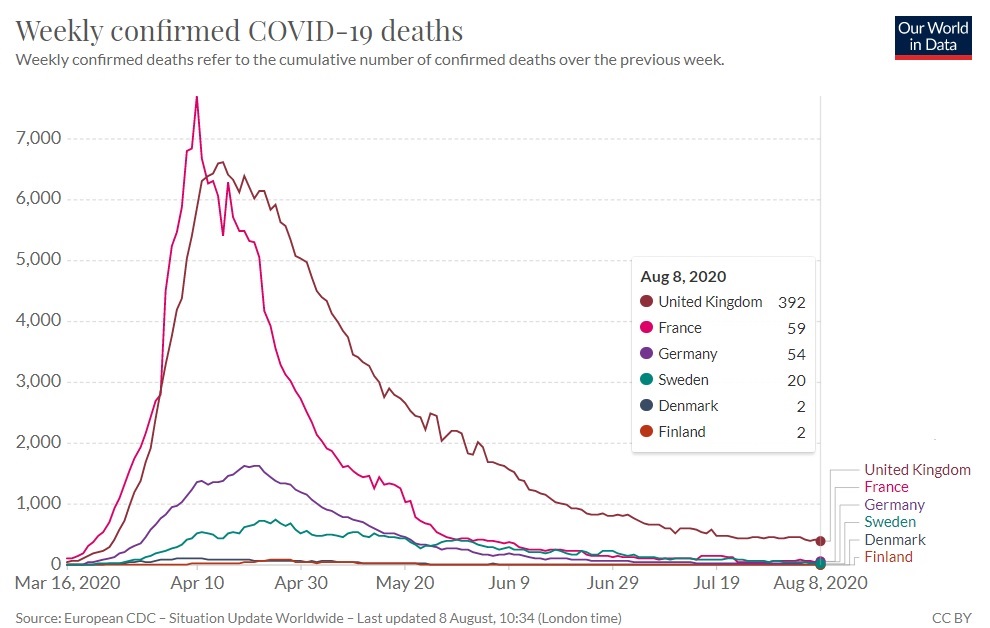 In the dramatic announcement that the U.S. may ban WeChat and TikTok, we feel a few facts and ideas are getting lost in the geopolitical shuffle. And, because the world is complicated and non-binary, these ideas are contradictory, or at least don’t fall into an easy narrative no matter what policy choices you advocate regarding China. First, while we would not ban WeChat and TikTok in America, or at the least, not in the fashion that the Trump Administration is doing, when we read stories about how unfair it is that Chinese immigrants and students won’t be able to talk with loved ones in China without WeChat, we feel people are missing the point of why. It is not because the U.S. bans WeChat, it’s because every other single service that they might be able to use to communicate is banned in China, whether Whatsapp, Facetime or anything else. China began the banning of apps long before Trump was the apple of a red state voter’s eye, which is to say China has been decoupling long before the U.S. Second, China continues to be innovative in technology. It is not a copycat but is creating new and useful technologies, or in the case of TikTok, if not useful, at least fun to certain segments of the population. Third, Facebook, Google and other American technology and apps do NOT spy on you in the same way TikTok and WeChat do. We pointed this out over a month ago with TikTok, which is much more intrusive than American apps, even forgetting that it is an authoritarian government that can access your data as opposed to American private companies. Likewise, WeChat is very much monitored by China’s government. We were one of the early American users of WeChat (long story involving the mistress of a Chinese billionaire) and understand its usefulness. So, by all means, let’s debate whether these bans are a good idea but let’s do so from a context of knowledge and data. 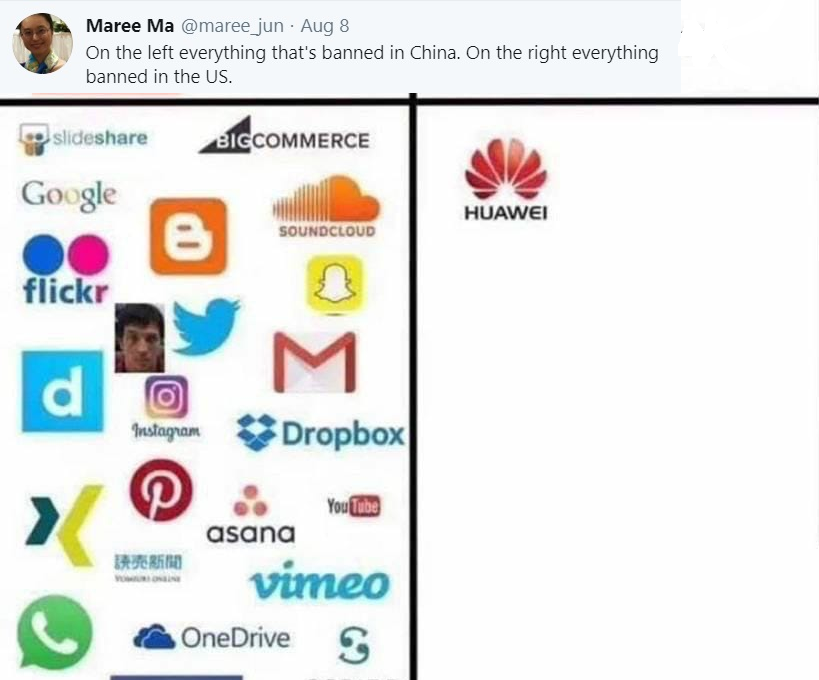 Where It’s Safe To Retire

We have often noted, including recently, the aging demographics of our world. We admit we are a bit Ahab-like about it, although our whale is wrinkly, repeats old stories and moves its fins gingerly. But aging demographics will have huge ramifications for the world, including managing the retirement of so much of the population. Visual Capitalist recently ranked 37 countries by their pension systems based on criteria such as basic income levels, the sustainability of the systems and protections for its populations. Northern European countries account for five of the top ten countries with The Netherlands ranked number one. Australia and Singapore are also in the top ten as are Canada and Chile. Thailand, Argentina and Turkey are ranked lowest so retirees there may want to hold off on buying a retirement bungalow. In the meantime, scan the top and bottom ten below as you make another contribution to your 401k. BTW, the U.S. is ranked 17th. Florida, in the current pandemic, has been disqualified.

Unfavorable Views of China and the U.S., World Air Conditioning and Trade Helps... Stop Sweden From Making Us Talk About Them, Highest Quality Governments, and...
Scroll to top