Stop Sweden From Making Us Talk About Them, Highest Quality Governments, and China in the Galapagos

For a number of months we have been referencing our upcoming book about China. Today, we are pleased to announce we have a publishing deal with Tuttle Publishing, the world’s largest publisher of books on Asia. We are delighted to be partnering with Tuttle and thankful to our friend, Chris Johns, for his advice and help on this journey. A final title has not yet been settled on but our forthcoming book will explain how China has become more authoritarian and expansionist and what strategies the U.S. and its allies need to adopt to address this new challenging China. We are fairly confident it is the only book about China that references Dolly Parton, Lebron James, Bruce Springsteen and the movie, Die Hard.

It draws on our personal experiences with and in China (you’ll hear about the escalator incident during the visit of Xi Jinping to Seattle) as well as a wealth of research we conducted. Like all good things in life, you will have to wait to read the book which will not come out until early next year. For those of you who have read the fine print of International Need to Know, you are aware that as a reader of this fine e-newsletter you are obligated to buy and read at least one copy of our book (Sec 4, subsection (a), paragraph 32). In the meantime, we hope you’ll celebrate like the remarkable women in this video dancing to Big Chief by New Orleans’ own Professor Longhair.

Our book being published by the estimable Tuttle does not make us a chief or big but our hair is getting longer during the pandemic and we attempt to not pull it out as we are again forced to discuss Sweden’s Covid-19 response, slick it back as we analyze which countries have the highest quality of governments, and worryingly twirl it while examining China’s fishing fleet in the Galapagos. It’s this week’s International Need to Know, neither rain, nor sleet nor snow dissuading us from our weekly delivery of international news and data.

Last Minute Sad Update: Yesterday, former U.S. Senator Slade Gorton died. I had the pleasure of meeting him a number of times, including many years ago when the U.S. Representative I worked for assisted Senator Gorton in saving the Seattle Mariners…yet again. No matter what one’s politics are, if you’re a Seattle Mariners fan, then you owe a debt of gratitude to Senator Gorton. He saved the Mariners from leaving Seattle not once, not twice but three times. Less importantly, he was a diligent public servant who whether you agreed with him or not, argued for policies out of a sense of duty to improve his country. In our age of brash and loud 150 character pontificating, he will be sorely missed.

Dammit Sweden, Stop Making Us Talk About You

No sooner than we throw a bucket of cold water last week (from the Baltic Sea, of course) on those still arguing for Sweden’s Covid-19 success, than we come across a paper via Marginal Revolution, attempting to provide reasons for Sweden’s high death rate other than its soft closure policy. INTN is nothing if not fair so we did a polar bear dive into the paper to see if it holds water, cold or warm. The most intriguing point made by the authors is that Sweden has a big week-long holiday, Sports Break (sportlov), and that there is evidence many Swedes traveled during the holiday to ski in the Alps. Denmark, Finland and Norway also all have such week-long holidays but theirs occurred a week earlier than Stockholm’s.

So, goes the argument, many Swedes traveled, including to infected areas February 24 – March 1. That, the authors contend, is a reason, stricter lockdown or no, that more Swedes contracted the virus and died from it than their neighbors. They argue this because on March 12, when Denmark, Finland and Norway instituted their strict lockdowns, there was already an abundance of infections in Sweden. The virus results were already baked in so that even if Sweden instituted a strict lockdown, it would not have mattered. The paper also points to the fact there are far more people in nursing homes in Sweden than in their neighboring countries, something we pointed out months ago. We do not know if we buy this paper’s argument—even though we wrote way back on March 12, “much of what we think we know will turn out to be wrong in the light of longitudinal studies and time”—but we do know we want a Sport Break vacation instituted in America for 2021, or maybe wait until 2022 depending on the status of the pandemic. 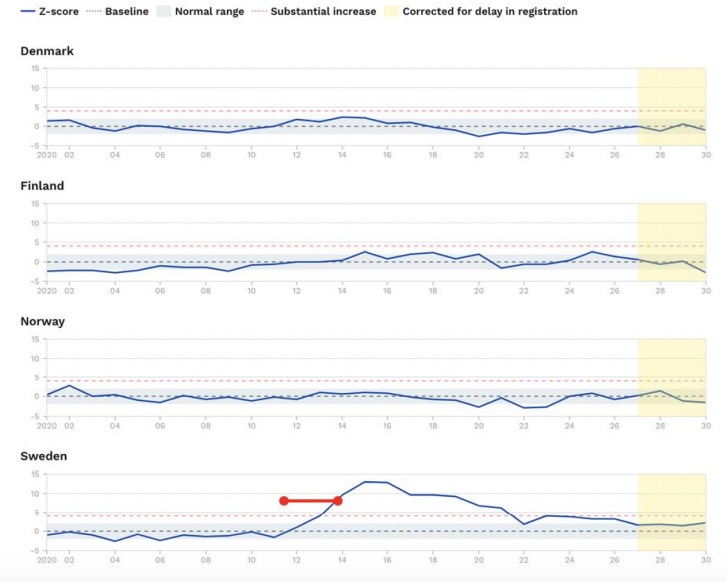 Ranking the Quality of Governments

The Covid-19 pandemic has shined a light (and not an ultraviolet cleansing one) on many aspects of our world, but one of them is the effectiveness and capacity of various governments around the world. Some countries have done better than others in containing the virus. In some cases it may be a matter of luck or some factor about the virus not yet very well understood. In other cases, it truly is due to the effectiveness and capacity of government. But which countries around the world have the highest quality of governments? And how does one measure such a thing? The Niskansen Center took it upon themselves to give it a try using data from the Prosperity Index created by the London-based think tank Legatum Institute. They pull in data from the World Bank’s Doing Business Report, Transparency International and other sources to measure levels of corruption, ease of doing business, confidence in elections and other factors. Like last week’s list of the best pension plans, the top ten highest quality governments are littered with northern European countries. Finland and Norway top the list but you’ll find Denmark, the Netherlands and Sweden in the top ten too. Sweden may or may not have done well on Covid-19 (see story above) but government quality and capacity is not the reason why. You’ll note New Zealand is ranked fourth. It isn’t until Singapore, ranked number 14, that we don’t find a full throated democracy. The U.S. is ranked 24th.

China On the High Seas

We’re thinking of sending Xi Jinping a copy of How to Win Friends and Influence People, putting aside the fact that we’ve never read it ourselves, so it’s possible the book would advise against sending it to the head of an authoritarian government. But, China continues to annoy people the world over. For yet another example, it’s not just the South China Sea where China flexes its maritime muscles. It’s all over the world, including Ecuador’s Galapagos Islands. Reuters reports that a fleet of 260 Chinese fishing vessels is being monitored off the islands where they are fishing for marine life, especially sharks. Three years ago, such vessels caught 300 tons of marine life, most of which were also sharks. Chinese fishing vessels are sharks at getting sharks. An Ecuadoran official complains in the article, “Unchecked Chinese fishing just on the edge of the protected zone is ruining Ecuador’s efforts to protect marine life in the Galápagos.” Ecuador is teaming up with its neighbors, including Chile, Peru, Colombia, Panama and Costa Rica, to form a strategy against such maritime incursions. China, as it becomes a super power, is both flexing its muscles and triggering countries around the world to work out at the gym in response. Our forthcoming book is like a personal trainer to prepare us for competition with China.

Do We Still Need to Talk about Sweden, TikTok & WeChat and Where Its Safe... Who Has the Most Police, Asian Supply Chain Alliance, and Three Gorges Dam is...
Scroll to top