EU Vs US Covid Rates, China’s Challenging Demographics, and India Vs. China

We are hesitant to criticize NPR since they are much better than their media peers. It’s a bit like complaining that LeBron James doesn’t play great defense while his teammates clang three pointers off the rim. But when I was listening to NPR news the other day the top story was about the West Coast fires. The reporter said Trump was blaming forest management for the fires and then said “experts point to climate change for the cause.” I have yet to find a redeeming feature to Donald Trump, did not vote for him in 2016 and will vote against him again this year, but I still want my newscasts, especially NPR, to report accurately and objectively. Experts certainly do believe climate change makes these fires more likely and larger in scope but there are plenty of experts who also point to bad forest management as an additional reason for the increase in fires. See here for just one example of many.

Both climate change and bad forest management can be contributing causes. You do not need to succumb to the Tyranny of Narrative that everything must have only one single cause or that we must always oppose anything that Donald Trump says even if he stumbles upon something that may actually resemble accuracy. NPR seems to be doing this more frequently in the last year–simplifying stories and reflexively contradicting anything Trump says. Certainly Trump spews a power vomit amount of lies, falsehoods and norm-breaking words, but even so, the rest of us can’t embrace his mentality. We need to remain reasoned, calm and factual. As we wait for NPR to come to its senses, we douse the partisan flames with reasoned analysis of E.U. and U.S. Covid-19 infection rates, China’s challenging demographics and India’s stance against China. It’s this week’s International Need to Know, remembering when Bill Gates Sr. jokingly said to us, “I’m THE Bill Gates” (RIP).

Earlier this week, when the smoke was especially bad here on the U.S. West Coast, I felt a sense of despair amongst the people I was in meetings with on Zoom. It’s one thing to eschew going to restaurants, gyms and other normal activities for seven months but to be forced entirely indoors due to the smoke was a burning bridge too far. There is no defending the U.S. federal response to the Covid-19 pandemic. It was unprepared from the beginning, the president has repeatedly given false and damaging information about the pandemic and his administration continues to lag in helping states and localities institute testing, tracing and isolating systems. But it has been little noted that the European Union, which is similar in size and population to the U.S., has now passed America in daily number of Covid-19 cases as you can see in the first graph below. The pandemic it seems transcends politics and political prejudices. However, the EU has thus far done much better than the U.S. in number of deaths. Presumably and unfortunately deaths will soon rise in the EU due to its increased number of infections but it is still not likely to catch up with the U.S. death rate. As the pandemic has worn on, Covid-19 death rates have decreased all over the world. To repeat, the EU’s increase in infections does not excuse the negligent approach taken by the U.S. federal government and by many of the states and cities, but, as always, we provide data as it is, not as prejudices may want it to be. 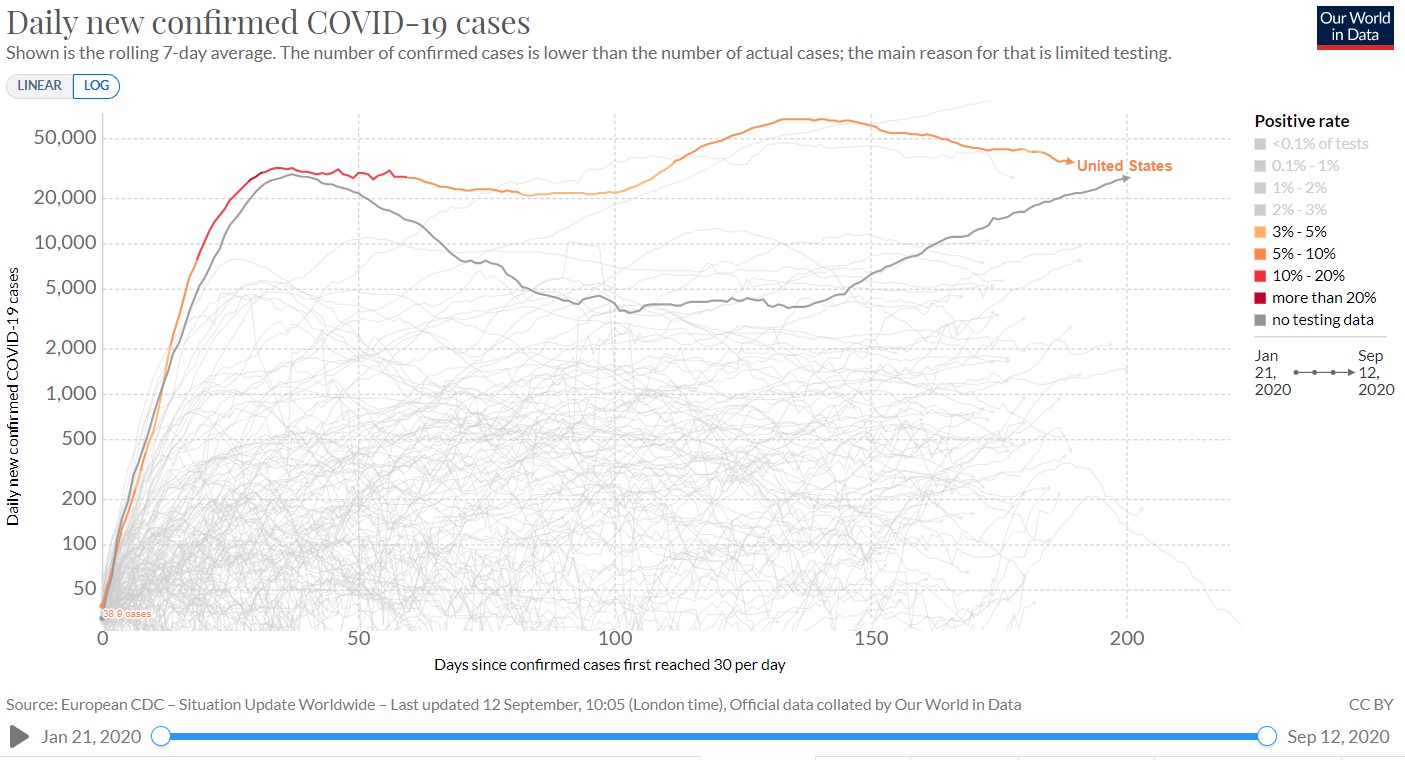 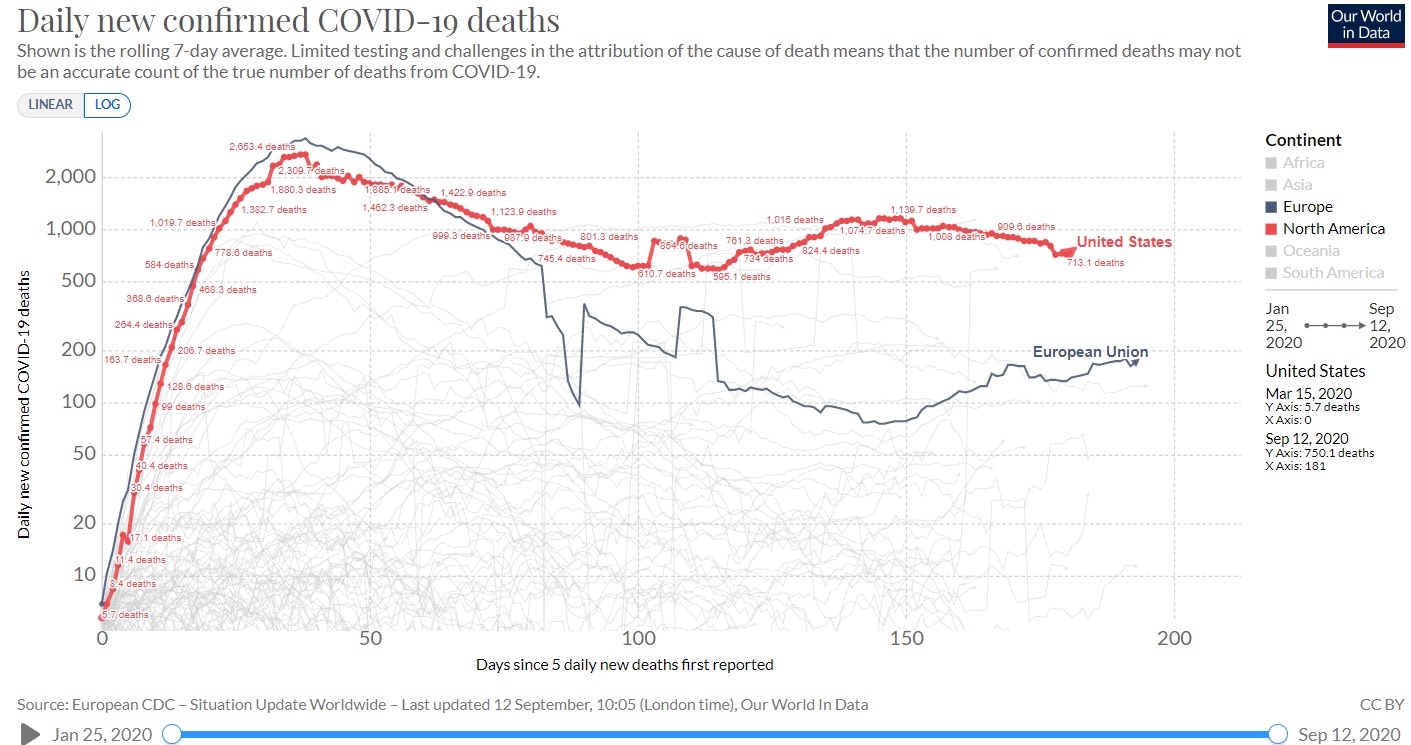 In our upcoming book on China, we discuss China’s aging demographics and what that portends for its future. China’s leaders are, of course, well aware of these challenges and have been working to encourage women to have more children* (although not Uyghur women, whom instead they are forcibly sterilizing). However, thus far China has not been successful in doing so. And very small anecdotal evidence indicates that continues to be the case. The South China Morning Post reports that Ningbo, a coastal city south of Shanghai, is on pace to have 20 percent less children this year than in 2019: “In the first half of this year, Ningbo reported 17,945 new births, down nearly 20 per cent from a year earlier, according to the half-year report published by the city’s health authorities in late August.” Many countries in the world face aging demographics due to low birth rates and many of them have enacted policies to encourage more births. None have been successful. We expect China to have similar problems in encouraging more children. This will have profound implications for its future, as you will learn in our book. 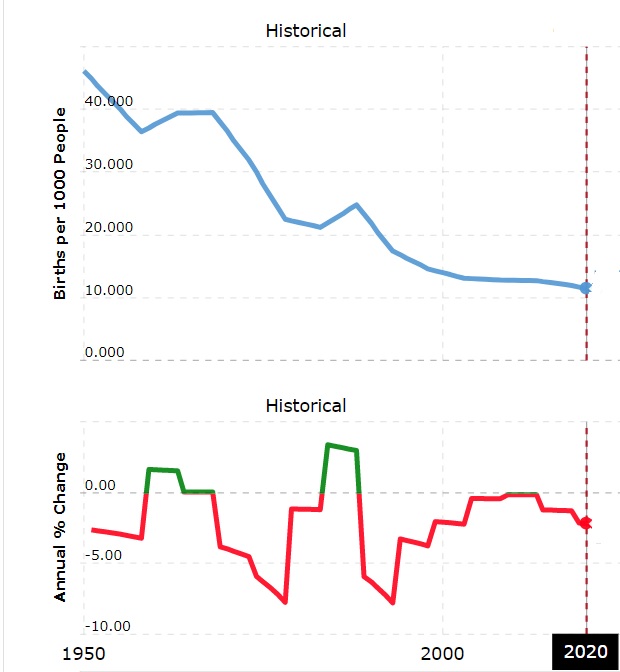 India Continues to Up the Ante on China

Amidst the flotsam of post-apocalyptic living and the jetsam of world changing events, it is easy to lose sight of the two most populous countries competing ever more vigorously across a variety of platforms. The China-India border dispute continues to fluctuate dangerously. Meanwhile on the economic front, India in addition to banning a variety of Chinese apps, has also restricted China from investing in a number of its industries. As we reported a while back, India has joined with Japan and Australia on a supply chain coalition to counter the dominance of China. Plus, Japan has added India to the list of locations where it will subsidize Japanese companies moving from China to diversify its own manufacturing and supply chains. And, India, like a growing number of countries, is eschewing the use of Huawei for its 5G network. India is far behind China economically and in many other ways, but the future paths that the largest democracy and the largest authoritarian state take will largely determine the destination of our rotating orb of a world.