On Christmas Day, as we watched a number of NBA basketball games, all of which were lopsided affairs—something that appears to be increasingly so in the age of the increased use of three-point shots—and prepared to watch Die Hard, we read an article in the Seattle Times about “How will people know when to get the coronavirus vaccine?” We were stunned to read “The state Department of Health (DOH) is working to finalize its vaccine allocation and list of where state residents fall on the prioritization list.” Let’s remind ourselves that on November 20, 2020, Pfizer applied for emergency approval by the FDA. More than a month later, Washington state still hasn’t determined a priority list for people receiving the vaccine and tells the Seattle Times “The prioritization list will be posted on DOH’s website when it is finished.” But it’s worse than that. Back in July, Pfizer said they planned to have 100 million doses ready by the end of the year. And this doesn’t even include Moderna’s similar plans and announcements. So with nearly half a year’s notice, Washington state still does not have a plan for prioritizing distribution of the vaccine (not coincidentally, WA has used less than 20 percent of its allotted vaccines) . And Washington state has been one of the better states in combatting Covid-19. As we write in the epilogue of Challenging China, “…just because Biden is president and Trump is not does not mean America will tackle and solve its most vexing issues.”

Fortunately, shortly after reading the Seattle Times article, we discovered the extraordinary video below of an enormous wooden xylophone in the woods of Japan playing Bach. As we enter 2021, watch the video and walk into the new year calm and amazed at human ingenuity. It’s this week’s International Need to Know, expecting an amazing 2021 built partly out of the destruction of 2020.

…well, shortly after seeing the calming wooden xylophone video, we came across this video of Boston Dynamics’ robots dancing to Do You Love Me? including one of their scary Black Mirror-like dog robots doing the mashed potato. Does this video make you feel safer about robots or more worried? Your answer likely indicates how you foresee 2021. Scared, excited or wooden xylophone-like calm, INTN wishes you a Happy New Year!

Finally, without further ado, here’s what you need to know.

Recently someone said to us that China is not culturally capable of liberalization or democracy, that somehow their history prevents them from adopting such societal mechanisms. We reminded them there is an example of Chinese embracing liberalism and democracy just off its coast, as close as Philadelphia’s Liberty Bell is to New York’s Statue of Liberty. Yes, the too often ignored Taiwan, as we note in Challenging China, is one of the most successful countries in the world. And it continues to be one of the most successful in handling Covid-19. Recently Taiwan experienced its first domestic Covid-19 infection since April when “a Taiwanese woman in her 30s, was confirmed on Tuesday as having been infected by a New Zealand cargo pilot.” Within days, Taiwan, using its high tech system as part of a plan it had developed coming out of SARS, contact traced 176 individuals who had interacted with the infected woman and quickly used “both nucleic acid and antibody tests” on the 176, all of whom tested negative. The New Zealand pilot was fired by his employer EVA Airlines for breaching Taiwan’s Covid-19 protocols. You can be Chinese, democratic, successful economically, and contain Covid-19. 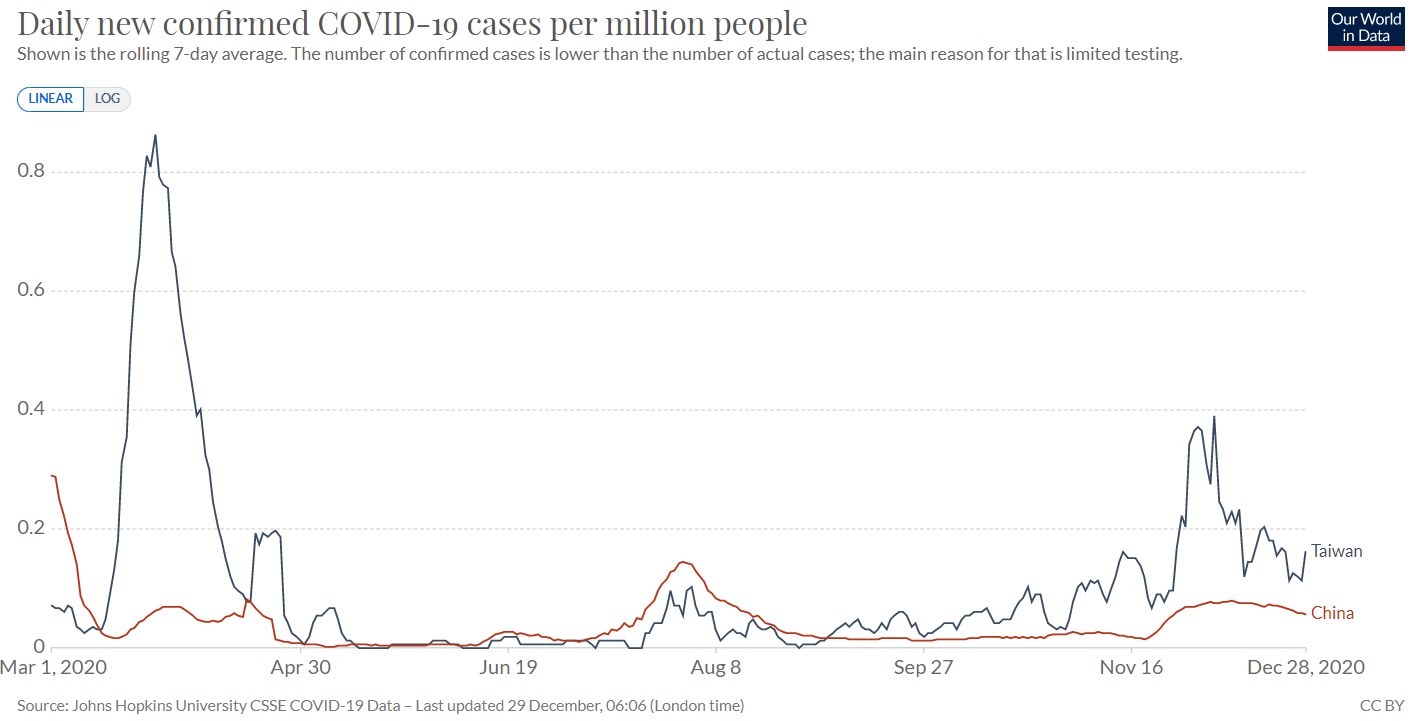 The U.S. is off to a better start than most countries at vaccinating its population though it is remarkably slow given a basic cost-benefit analysis of faster implementation of vaccinations and it is vaccinating far fewer people than promised. But, Israel stands out for its vaccination implementation plan. According to Eran Segal, a scientist at the Weizmann Institute, Israel is vaccinating 1 percent of its population each day and expects to be able to keep up at that pace. If so, all of Israel* will be vaccinated by sometime in March and life will presumably return to normal, or at least as normal as can be while the rest of the world continues to struggle with the pandemic. Israel has seen a third wave, or rather a cresting of a never completely contained second wave of Covid-19 infections so being able to vaccinate quickly through its centralized health care system is doubly important. The number one priority for the world should be developing vaccination capacity. The lives saved and additional economic damage averted is magnitudes larger than any financial costs of doing so. 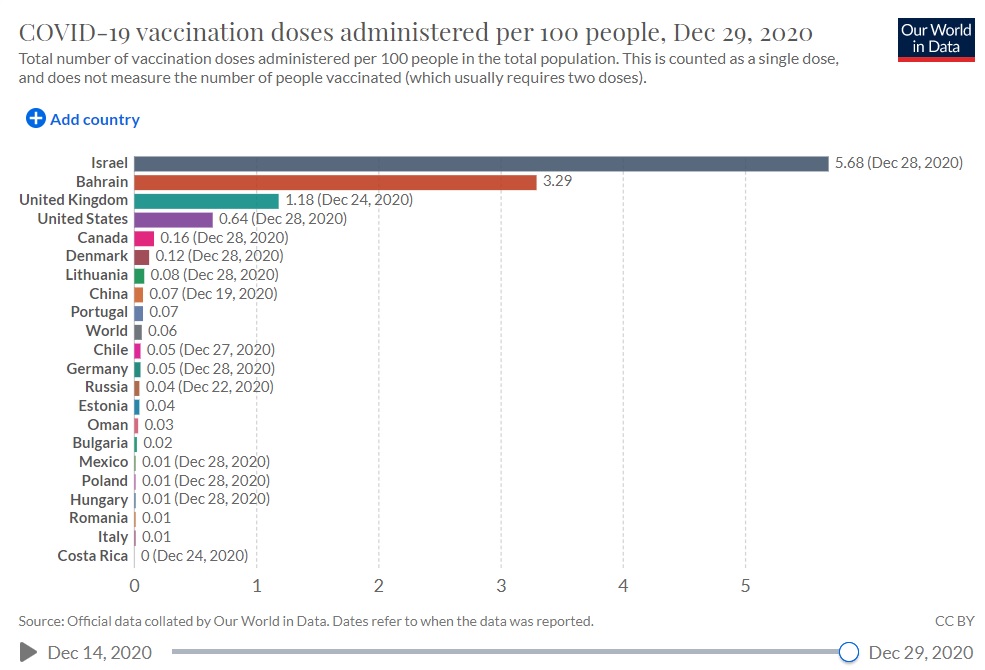 *It is not clear that the Weismann Institute is including Palestinians in these calculations.

Earlier this year, PEW Global released a survey showing people around the world had unfavorable views of China. But what do Chinese think about these countries? Some enterprising academics writing at The Diplomat decided to find out and conducted a survey which found negative views of the rest of the world have risen in China as well. 77 percent of Chinese have a very unfavorable or somewhat unfavorable opinion of the United States (is this higher or lower than the unfavorable opinion many Americans seemingly have of their own country?). That was by far the highest unfavorable ranking of any country asked of the Chinese. Japan, unsurprisingly, was the second most disliked country in China of those they were asked about followed by Australia. But Chinese appear to also be humming “Blame Canada” with our neighbors to the north the fourth-most unfavored country with nearly half of Chinese surveyed having an unfavorable opinion of Canadians. Germany, which is more willing to ignore China’s transgressions to protect its business interests there, including its auto companies, has the highest favorability rankings in China. Obsequiousness can induce popularity it turns out. 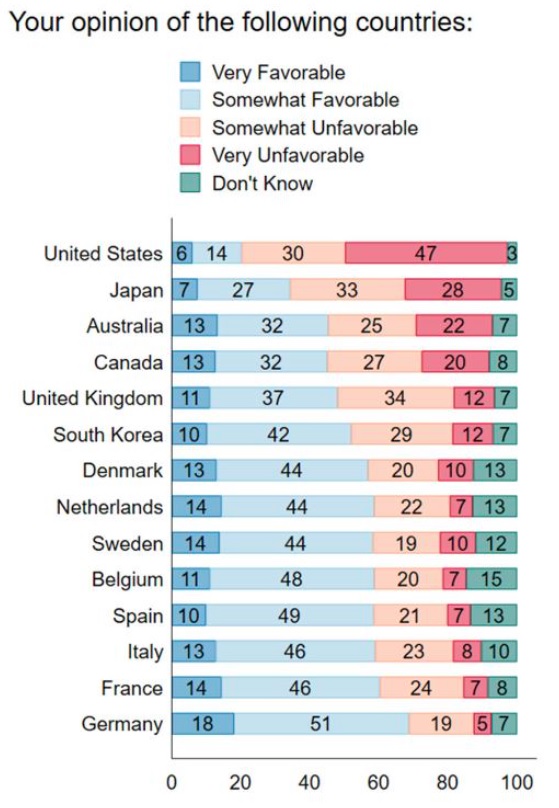 Death of Globalization Greatly Exaggerated, Dammit Ethiopia, and China Learns... A Call For Consequences for Seditionists, We’re All in this Together,...
Scroll to top