A Call For Consequences for Seditionists, We’re All in this Together, The Most Surveilled, and More Travesty in Xinjiang

Carnival started earlier this week and we had written something about it and the wonderful time we had in New Orleans last year just before Mardi Gras—a literary beignet for you–when a seditious mob, urged on by their seditious leader, stormed the capital and onto the House Floor where we once worked 30 some years ago, and we realized today was not a day for fried sweets but a moment in time when we all must take a stand. Among the at least 1600 points we could make, we’ll stick with two: a) the system worked and there was no overthrow of the democratic process. Joe Biden will be sworn in as the 46th president of the United States on January 20th. But, b) we cannot ignore what happened yesterday if we expect the system to endure in the mid to long term. There needs to be consequences for the actions of the seditious.

The House should re-impeach Trump promptly and the Senate convict. If his lying about election fraud and encouraging seditionists to storm the capital is not impeachable, than nothing is and we should eliminate that section from our constitution and install a monarchy. I’m sure we could find some young Bushes or Clintons somewhere willing to don the crown.

At the least, the Republicans in Congress who supported the idea that the election was stolen and protested the certifying of electors yesterday—the Josh Hawley’s, Ted Cruz’s and their like– should be censured by Congress. Activists in their states and districts should immediately start recall campaigns. Congressional leadership should consider taking votes to expel them. They should be shunned in polite society, never allowed a peaceful moment in public again. They should retreat to the murky Mordor-like shadows from where their thoughts and machinations seemingly emanate.

All those who breached the capital should be prosecuted for sedition. The Capital Police should be disbanded and a new force hired using a process that prizes constitutional fealty over the desire to wield power over others. This, in fact, should be a policy for police forces everywhere. That the capital police could not/would not protect the capital and the duly elected representatives and staff inside it–their only job–and that they allowed the seditionists to walk away from the premises–indeed politely held the doors open for them as they exited–is a gross dereliction of duty and cannot be countenanced.

In future weeks, we hope to return to introducing three important stories of our world with more mirth, more music, more wonder at the amazing world we live in and should be grateful for. In the meantime, we urge you not to forget yesterday, to urge your representatives, all elected fairly, to take the actions recommended above. In the meantime, we remind you we’re all in this together, survey the most surveilled cities in the world and fret over the latest evidence of oppression in Xinjiang. It’s this week’s International Need to Know, never so worried about America as we are today.

Without further ado, and with heavy heart, here’s what you need to know.

Reminder: We’re All In This Together

Last March, as countries started bragging about their success in containing Covid-19, we reminded you that we’re all in this together in terms of the virus and our economies. No one country’s economy could be successful until the pandemic—which by definition is global—was contained. We feel the need to remind people of this reminder as governments stumble and stutter in vaccinating their citizens. We have noted how inept America is in its vaccine distribution and complimented Israel. But remember, even if the U.S., UK and other countries that have begun vaccinating were actually competent and their populations fully vaccinated by the spring, that does not end the crisis. Our economies will not be at full capacity if parts of Asia, Latin America, Europe and Africa are also not able to vaccinate. And, if they do not vaccinate and the virus continues to spread in these countries, the virus’s chances of mutating into a more dangerous form escalate. We read about the need to vaccinate in the U.S. because of this mutation risk but not nearly enough about needing to vaccinate the world for the same reason. As of this week, according to the Bloomberg Vaccine Tracker, more than 14 million doses have been distributed in 30 countries. Hmm, there are nearly 8 billion people in the world and about 200 countries. In many of these countries, there is no near-term plan or in some cases no capacity for vaccinating. The U.S. should, with others, including China, be playing a leading role in coordinating, financing and helping vaccinate the world. Even if you don’t care about other people, and the last 12 months have provided ample evidence that many don’t, there are selfish reasons to squash the virus everywhere. Be selfish, people. Advocate and help vaccinate the world, not just yourselves.

*America continues to fail in its vaccination roll-out ensuring more deaths and increasing the chance of dangerous mutations of the virus. Our home state of Washington, governed by a Democrat, is the tenth-worst for vaccinating in terms of shots per person. It is a bipartisan disgrace. 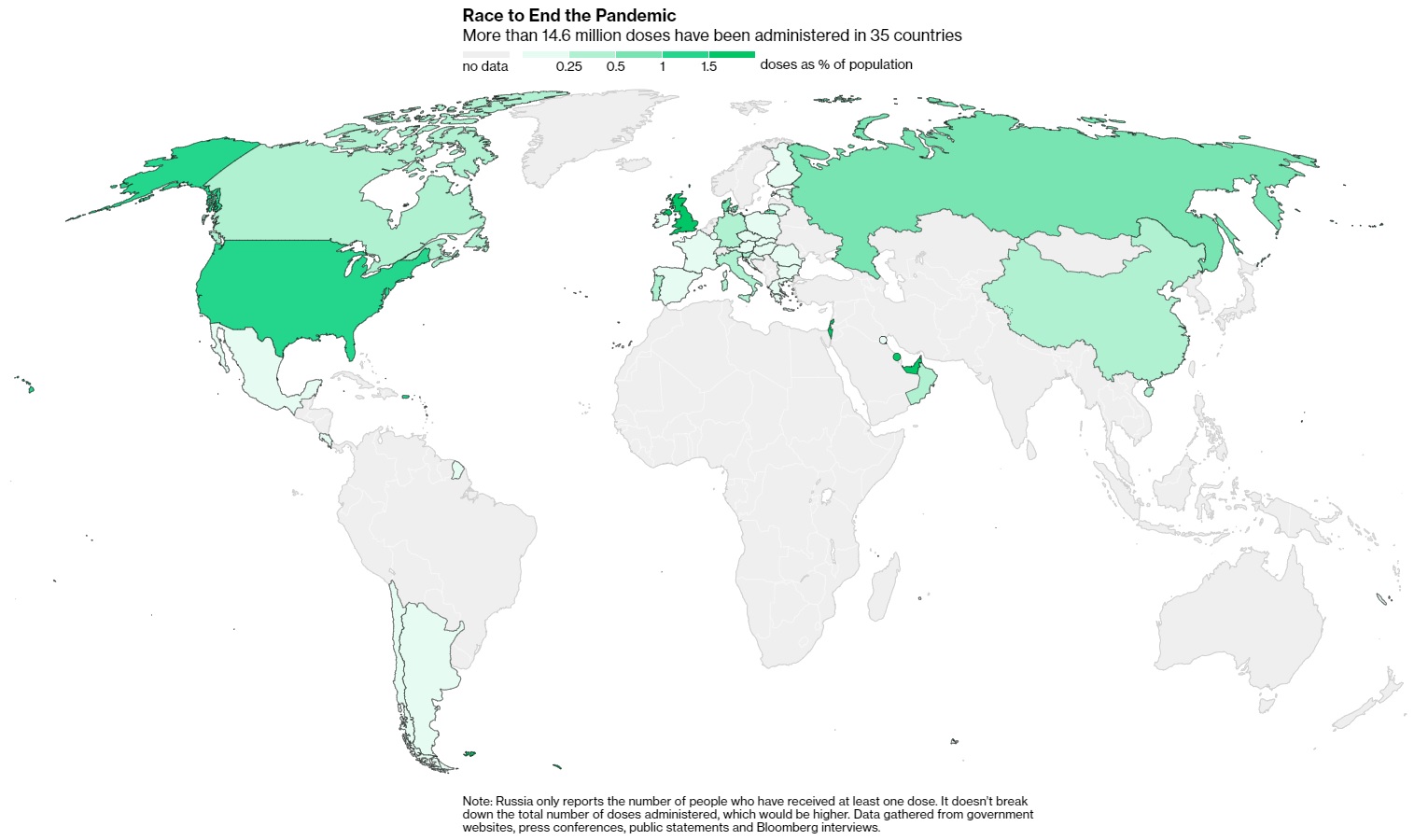 The “observer effect” tells us that observing something disturbs the system being observed, perhaps making real physical changes to the system. So are London and certain cities in China and India now changed? These are the cities with the most cameras per square kilometer. We knew London was one of the most surveilled cities and that China was chock-full of cameras in its cities but we had not realized India is so keen on filming its urban landscapes. In fact, Chennai and Hyderabad take the top two spots for most cameras per square kilometer as you see in the chart below from the VPN company, Surfshark. Of course, China has six of the top ten and is the most proactive in using facial, gait and other recognition technologies. In the future, for 15 minutes, we will not be on video—the rest of our lives will all be available on YouTube and other media platforms. Dress and act accordingly.

China Corner:  We See You

So the above story tells where there are lots of cameras but not how are they using them. Darren Byler in ChinaFile.com tells the sobering story of a young woman who attends the University of Washington and what happened to her when she traveled back to Xinjiang to visit her boyfriend: “At a checkpoint at the mall, she put her ID on the scanner and looked into the camera. Immediately, an alarm sounded and the guards manning the equipment pulled her aside.” She had been masquerading as a Han to protect herself but her ID and the camera immediately knew she was Hui, a Chinese Muslim ethnic group. Eventually she was detained and “…spent several months in ‘re-education’: chanting rules, singing ‘red songs,’ writing ‘thought reports,’ and studying elementary Chinese, under the bright lights of the cell and occasionally in a fortified classroom.” After she was released, Byler says, “Over time, she told me, she came to understand that the ‘smart city’ features of Kuytun meant that at key nodes such as train stations or shopping streets, ever watchful facial recognition cameras could pick her out of crowds and alert the legions of contract workers employed by the local police that she had ventured out of bounds.” China is using her city and others as experiments to build up their surveillance technology and implement it for “practical” uses, and likely to scale up these systems as they improve them. Read the whole article although perhaps with a stiff bourbon at-hand. 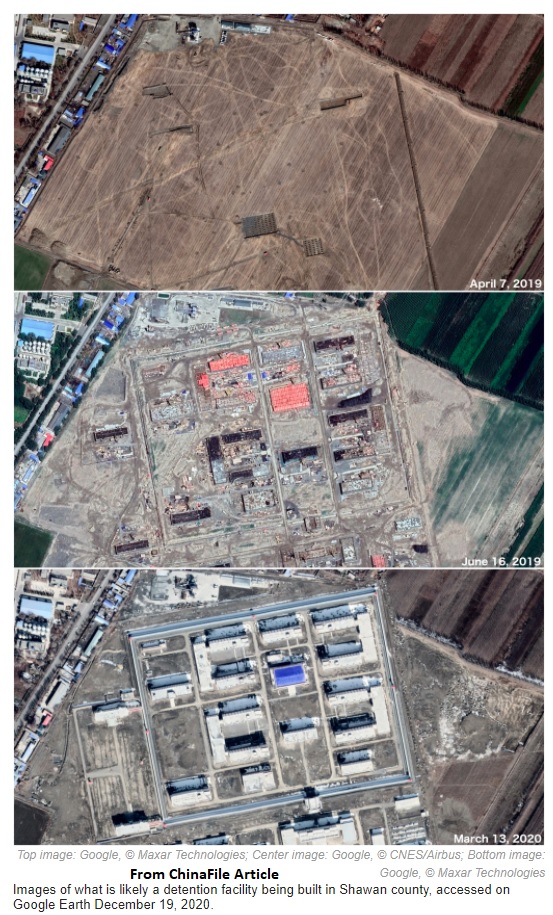 Successful Taiwan, Somewhat Successful Israel and Chinese Views of the Worl... Vaccinate to Save the Economy, Worldwide Vaccine Skepticism and China Corner...
Scroll to top