Vaccinate to Save the Economy, Worldwide Vaccine Skepticism and China Corner Explores Where the Wealthy Move

When we heard about Twitter’s ban of Trump, our Kahneman-fast-thinking was, “Great, about time.” But pretty quickly the Kahneman-slow-part of our mind began worrying. What are the full ramifications of this decision, what are the unintended consequences, how does this fit into a globalized system of information that is increasingly being bifurcated depending on where you live? We’ve wrestled with these questions all week and have not come up with satisfactory answers.

But making us feel better about our difficulty in developing solutions was a year old thread by the quantum physicist and science writer Michael Nielsen to whom we were directed by the economist Tyler Cowen. We strongly urge you to read the whole Nielsen thread but he notes—again this was in June 2019—that software is eating the world, including government and information. And, he says, it’s not obvious how our systems need to change to deal with this fact. As he puts it, “It seems likely that figuring out the principles & protocols of governance for this mediation layer will be one of the great challenges of the 21st century, a challenge much like figuring out the principles underlying, say, the US constitution.”

Trump clearly violated long established Twitter standards and there is not First Amendment protection for violence. But there are plenty of others who have long violated and continue to violate those standards on Twitter, including certain Iranian leaders and various state entities of China. In the crisis that is the authoritarian efforts by Trump and many Republicans in and out of office, it is easy to think fast and rush to judgment. Indeed, when the house is on fire, perhaps our first duty is to control the flames. But even as we douse them, we must also access the slow thinking of our brains to develop wise long term solutions for our new and expanding software world.

And our slower mind would like to adjust one item of our introduction from last week. While we continue to advocate for the reform and reconstitution of the Capitol Hill Police force, we should also recognize that some of the officers were not only brave but heroic in defending our nation’s capital, our democracy. Perhaps not all should be fired as we asserted last week—some could serve admirably in a newly constituted, differently structured and managed force. We regret not including such nuance in last week’s missive.

And so we try, ever so hard, to slowly think about the relationship between Covid-19 and the economy, vaccine skepticism around the world, and the huddled masses of rich Chinese. It’s this week’s International Need to Know, your unimpeachable source of important international information and data.

Worried About Economy and Businesses? Vaccinate!

On Facebook we have a friend who is a former elected official and likely wants to run in the future for public office. Since the beginning of the pandemic he has railed against shutdowns, mostly mocked mask wearing and generally asserted the economy is more important than containing Covid-19. Recently he posted similar assertions and we tried to gently suggest to him that if he wants to re-open and heal the economy his energies would be more wisely directed at castigating the Governor for the slowness of getting people vaccinated rather than the Governor’s advocating continued restraints on restaurants and other businesses. Surprisingly, since people are usually easily convinced on Facebook, he did not take up my suggestion but rather got off of Facebook. Small steps, I suppose. But, for those who are willing to look at data, below is a chart showing the relationship between containing Covid-19 and how well one’s economy did in 2020. It is imperfect because we are using estimates from the IMF for how economies performed in 2020. China’s economy likely did not do as well as the IMF claims (the IMF estimates use China’s official numbers which are not accurate) and it’s possible that Vietnam and Taiwan did better than IMF estimates. But, the chart below gives a good general indication of countries’ economies in relation to Covid-19 and as you can see, if you did a good job of containing Covid-19, mostly your economy did comparatively better too. Note that Sweden, which locked down less than Finland but had more infections and deaths, did slightly worse economically than its neighbor. Of course, last year governments’ focus was on containing Covid-19. This year countries economic performance will be reliant on how well they do at vaccinating their populations. And as we wrote last week, no country’s economy will perform optimally until most of the world is vaccinated. Our most important economic development tool in 2021 is vaccination, as quickly as possible. 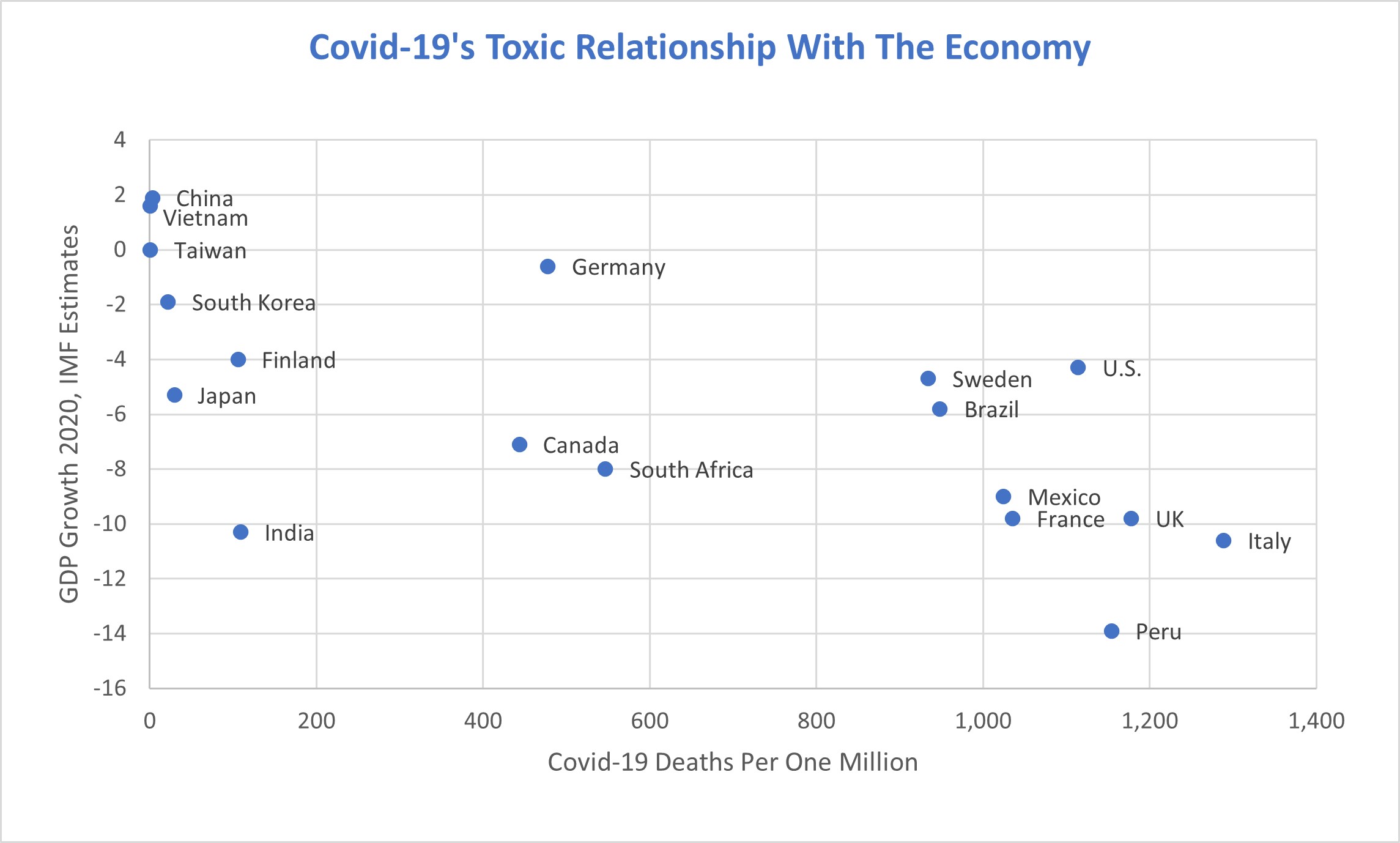 Vaccine Skepticism Around the World

In the U.S., we continue to roll out vaccines like a drunken Elmer Gantry (No, based on our complicated moral compass you don’t qualify for a vaccine yet. Nor you, you and you—wait, where did I put the vaccine? Wait, you won’t take the vaccine? Where’s my flask?). But it could be worse, we could be Europe. The German newspaper, Der Spiegel reports (we learn via Oliver Moody because unser Deutsch ist rusty) that what few vaccines the European Union thought to purchase, are being distributed to their members disproportionately: “Relative to its population Germany is getting 60% more doses of the Moderna vaccine than other member states… Germany and France are also getting a disproportionate share of the 100m extra BioNTech/Pfizer doses, while Poland, Belgium, Czech & others get none.” And on top of that, a poll conducted in December shows Europeans are more reluctant to be vaccinated than even Americans. In France, only 40 percent of the population say they would get the vaccine. Somewhere Louis Pasteur is taking a big needle and stabbing himself in the heart. 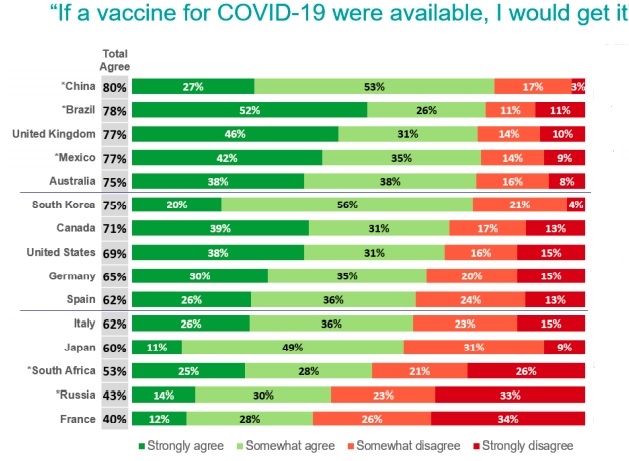 *Note that Chinese are most likely to say they will get the vaccine. The Decline of Western Civilization has opened up the gates of power for Xi Jinping like certain capital hill policemen for an insurrection at the U.S. Capital Building

China Corner:  Give Us Your Rich, Your Huddled Wealthy

The South Morning China Post, which somehow continues to write interesting articles even amidst epochal changes and stormy environments, recently published an article about the conundrum facing wealthy Chinese in the last year. While they may be nervous about the increasing oppressiveness of Xi’s rule, they are also nervous about moving to countries in the middle of a full-blown pandemic. The article references the Global Wealth Migration Review produced by AfraAsia Bank, which each year tracks where high net wealth individuals (HNWI)  move. Their most recent report covering 2019 charts that China has the most HNWI’s leaving their country (by percentage, Russia is the highest). Where did they flee to? Australia, America, Switzerland, Canada and Singapore were the top five. We will be very curious to see their 2021 report and how the pandemic affected the movements of the rich in 2020. As the Biden administration grapples with both China and Russia it is worth remembering that countries where people want to leave are not as powerful as we think. If you want to have influence and power as a country, best to be a successful one. Something America needs to remember too. 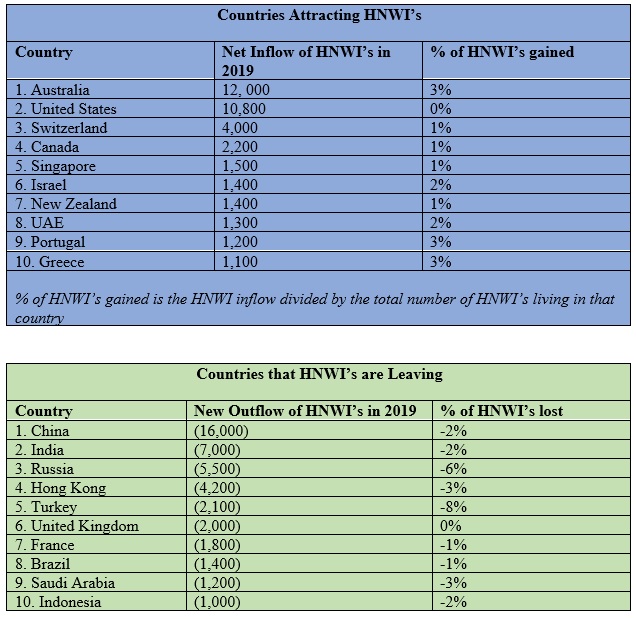 A Call For Consequences for Seditionists, We’re All in this Together,... What Really Helps Countries Control Covid, Israeli Flying Ambulance and China’s...
Scroll to top