The State of Democracy, CO2 Emissions Now and Historically and China’s Misadventures in Myanmar

The piano notes of the National Anthem jaunted and juiced through the crowd at the Mount Baker Theater. They had what the piano player, Jon Batiste, describes as a “different harmonization and scope of where the song we’ve all heard thousands of times, could go”. It was an unusual way for a pop/jazz concert to begin and yet the rendition was so moving, so joyous, that it set up all that was to come that night. We saw Jon Batiste at that grand old theater from another era maybe ten years ago, long before he became the band leader on Stephen Colbert’s The Late Show. He is not just a national treasure but a world treasure, as would be anyone from a musical family of New Orleans with the joy, vibrancy and intelligence of Batiste.

Not only is he a remarkable musician and performer, we can think of no one more adept at explaining music, both the theory and the practical, in a way that is understandable for those of us who don’t have melodious chops but do have a love for music. The best 45 minutes you will spend this week is listening to the March 11, 2021 Fresh Air podcast in which Terry Gross interviews Jon Batiste. It is the best, most joyous, most educational hour of radio since…the last time Batiste appeared on Fresh Air. It will also be the only time you hear a rendition of the Star Spangled Banner that will tempt you to shout “hallelujah” and have it described accurately as “celestial.”

Like Terri Gross at the end of the interview, when Batiste says he looks forward to returning to the show, you, too, will sound orgasmic. Meanwhile, we tickle the keyboard to hit some minor keys on the current state of democracy in the world, listen to both classical and modern CO2 emissions and sing a protest song to China’s involvement in the Myanmar coup. It’s this week’s International Need to Know, the springtime of international information and data, but blooming year round.

The State of Democracy

The world is measurably better than it was 70 years ago as we have shown repeatedly in this space, but we also admit in recent years there have been troubling trends, including shifts away from democracy. The V-Dem Institute attempts to quantify this trend in their annual Democracy Reports. We don’t find it to be a perfect attempt—any such methodology is prey to subjective judgments—but it is fairly transparent in its efforts and its worth grappling with their data, assumptions and judgments. Their top-line findings are that “The world is still more democratic than it was in the 1970s and 1980s, but the global decline in liberal democracy has been steep during the past 10 years and continues in 2020.” In fact, they claim that democracy for “the average global citizen in 2020 is down to levels last found around 1990.” A big part of the decline is that V-Dem asserts a significant decline in democracy in India, which, of course, is the second most populous country in the world. There they note that India has increasingly used censorship as a tool. Their assessment of India’s decline is so dour that V-Dem now labels them an Electoral Autocracy. The definition for this is from a 2018 paper that states such countries “fall short of democratic standards due to significant irregularities, limitations on party competition, or other violations.” Classifying India as such allowed for the sexy, but misleading, headline: “68% of the world’s population lives under an autocracy.” We have noted in the past some of India’s troubling actions but whether they rise to the level of now labeling them an Electoral Autocracy we’re not sure. Nonetheless, all of this is worth measuring and keeping tabs on in the months and years ahead. Our freedom depends on it. 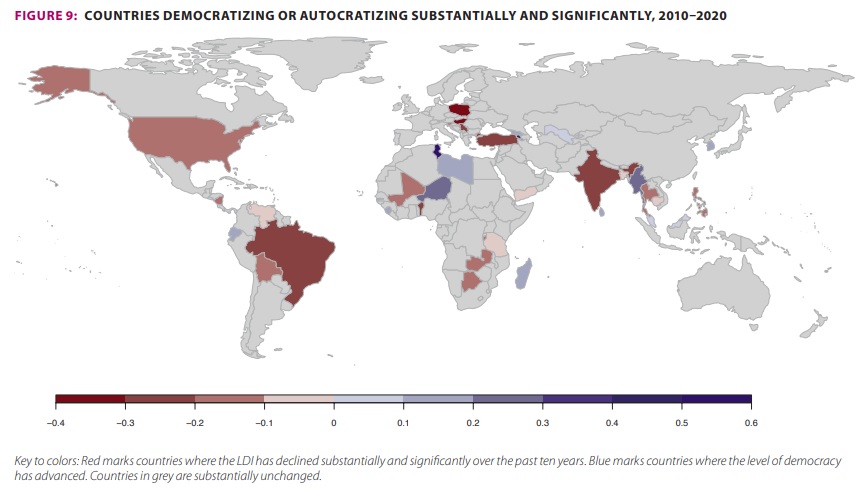 We talk about climate change in our book, Challenging China. How could we not given that China is the largest current contributor to greenhouse gas emissions. But cumulatively, the United States is still number one having emitted 399 billion tons of CO2. China is second having emitted 200 billion tons.* But since 1988, China has emitted more than the United States. And the rest of Asia, including India, are catching up fast. The goal, of course, is for them to never catch up to what the U.S. has spewed into the air. The United States peaked in its emissions over a decade ago. China might have reached its peak recently. India and other parts of Asia are thus far still growing. Any U.S. climate change policy needs to recognize that reality. As with Covid-19, no one succeeds unless we all succeed. We humbly offer one such solution in our book.

*There is no data for China pre-1900 so they’re cumulative data is slightly undercounted. All data above is from OurWorldInData.com

China Corner:  Welcome to the World of Hegemony

Power corrupts. This basic truism is too easily forgotten. It was something the American founders understood well and tried to reckon with in the structure of government they created, even as they also were corrupted by power. When countries become powerful, inevitably they exert it onto the world, whether ancient Rome, the Ottoman Empire, the British Empire, America post-World War II and now, China. Of course, with power comes problems (not necessarily responsibility you silly modern cartoon movie myth makers). The more you stretch your reach, the more bites, nicks and sometimes even hacks on your arm. Take Myanmar, for example, which the Myanmar army did in its coup. China has many interests in the country, including pipeline projects. There has been much discussion of what China’s role has or has not been in the coup and in protecting the coup. The Irrawaddy reports that there was a leaked document showing that a Chinese delegation held an emergency meeting with the new Myanmar government in late February. There has been rising anti-Chinese sentiment in Myanmar due to China’s perceived defense of the new regime. According to the article, “In response, protesters said they would intensify efforts against China’s interests in Myanmar. They also threatened to blow up the oil and gas pipeline and oppose all Chinese projects across the country if China continues to block United Nations Security Council action against the regime.” China has become a significantly more expansionist country in recent years, as we lay out in our book. But they will find that with such expansionism will come all sorts of thorny problems. Myanmar is an early test of their aggressiveness