We believe we used the term “ghosting” correctly earlier this week and it made us feel like we were 25-years-old (until we tweaked our back exercising later that day). For decades we have tried to ghost the British Royal family—ignoring and shunning them as much as possible in a media environment intent on stuffing them down our information throat. But Sunday night as we scanned our Twitter feed which is comprised of people who are supposed to be writing about China, other international matters, the NBA and our beloved Seattle Mariners, 90 percent of the Tweets were about some woman named Meghan Markle and some chap named Harry interviewed by a woman named Oprah (some day we will relate how we were almost on the Oprah Winfrey show, or at least how our letter was). Many months ago we somehow became misinformed that Meghan was Jewish which we learned this week is not true (though her previous husband was apparently Jewish—she only marries the chosen of one sort or another). Only fairly recently did we learn she is Black. We are mostly at a loss for other knowledge of the royal family and at a complete loss as to why they still exist in the 21st century and why anyone cares about them (although full disclosure: our father-in-law follows them closely–we have not yet discussed this most recent imbroglio).

We offer a humble suggestion for those who want to follow people who through random genetics live in a castle with the intense gaze of the media upon them: create a British Monarchy Real World. Throw eight or nine random people into Buckingham Palace and let them perform whatever current duties the Queen, Duchess of Sussex, Duke of Earl and the others currently do. Each year at the stroke of midnight, they would be randomly replaced by another group of misfits and miscreants. As we await the British Parliament’s debate of our proposal, we add some more strokes to the big picture, present our latest most underrated country, and examine China’s innovative and repressive future. It’s this week’s International Need to Know, the Henry the V of international information and data: once more into the breech!

Like an Ahab artist, we are increasingly becoming obsessed with the big picture, which we added a dab of paint to two weeks ago.. Perhaps this is partly because we are at the very beginnings—the ponder, research, ponder some more—stage of working on a new book (pre-order our current book, Challenging China, to make this new book more possible). And perhaps our most recent muse to paint big pictures is a blog post by the Grumpy Economist (we are satisfied to be merely the Bewildered Analyst) about how certain European countries have badly underperformed the last two decades. Many European countries, in terms of GDP per capita and income per capita, are a third lower than the U.S. More worrying is that the gap increased over the last twenty years. There is much to bicker with the Grumpy Economist’s post as you’ll see in the comments but it is interesting to compare GDP per capita since just after World War II among a host of countries as we do in the chart below. Three items of note: European countries generally do worse compared to the U.S. after the Euro was instituted but so too did the UK and other non-Euro European countries. The Asian Tigers of Taiwan, Japan and South Korea were the countries that really played catch up to U.S. GDP—but note that Taiwan has done the best. China is the other big outlier in playing catch up. But note their GDP per capita increases are not as impressive as the Asian Tigers thus far and China is likely to have flatter growth in the coming years. Oh, and a fourth point: Chile remains underrated and it is increasingly difficult to reconcile their social unrest with their economic results. Which leads us to an important announcement in the next story: 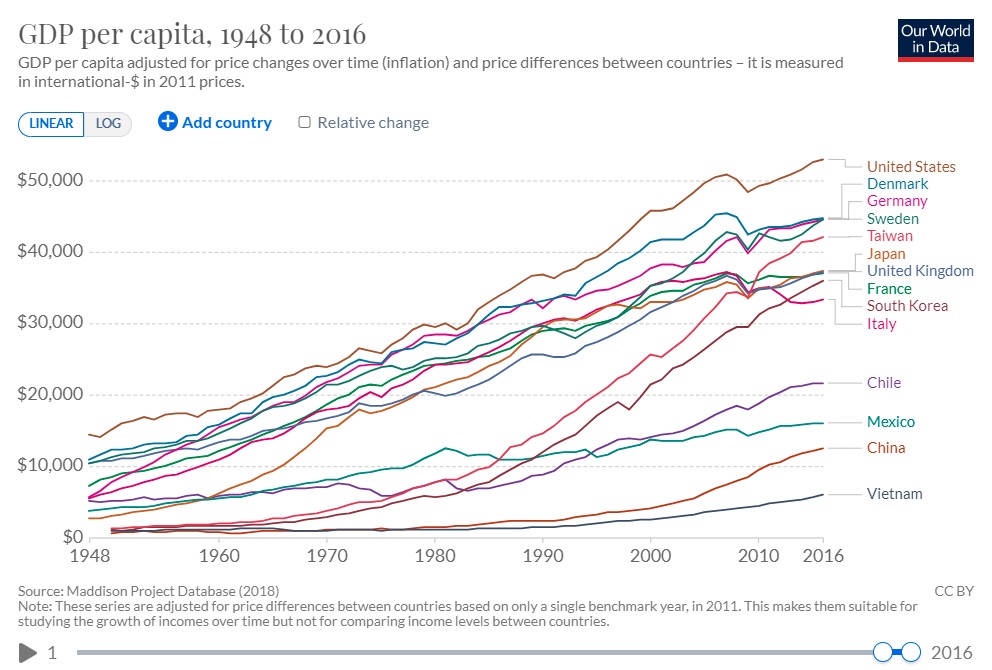 Our New Most Underrated Country

Many years ago in this space we ranked Mexico as the most underrated country in the world. In 2019, we replaced them with Ethiopia. We now have a new candidate for most underrated: Chile. The other day while perusing vaccination rates around the world, we saw that Chile is now 8th best in the world for vaccinating their population and that’s after starting their vaccinations two to four weeks later than some of the other countries in the top ten. As we have noted in commenting about their social strife, Chile has one of the lowest inequality rates in South America and one of the highest GDP per capita rates. This year, like most countries, their economy shrank, but it shrank less than nearly every other country in South America. And, they have excellent wine (someday we’ll recount a strange and wonderful experience we had in a Chilean winery). Let’s be clear: by dubbing Chile the most underrated country in the world, we are not projecting their future, only that their current achievements are relatively unrecognized, including by many Chileans. In fact, with all the complaints by Chileans and their desire for massive change, we worry they may throw out the relative competent state capacity and economic prowess baby with the social challenges bathwater. That would be a shame. Chile is underrated and that may be their downfall 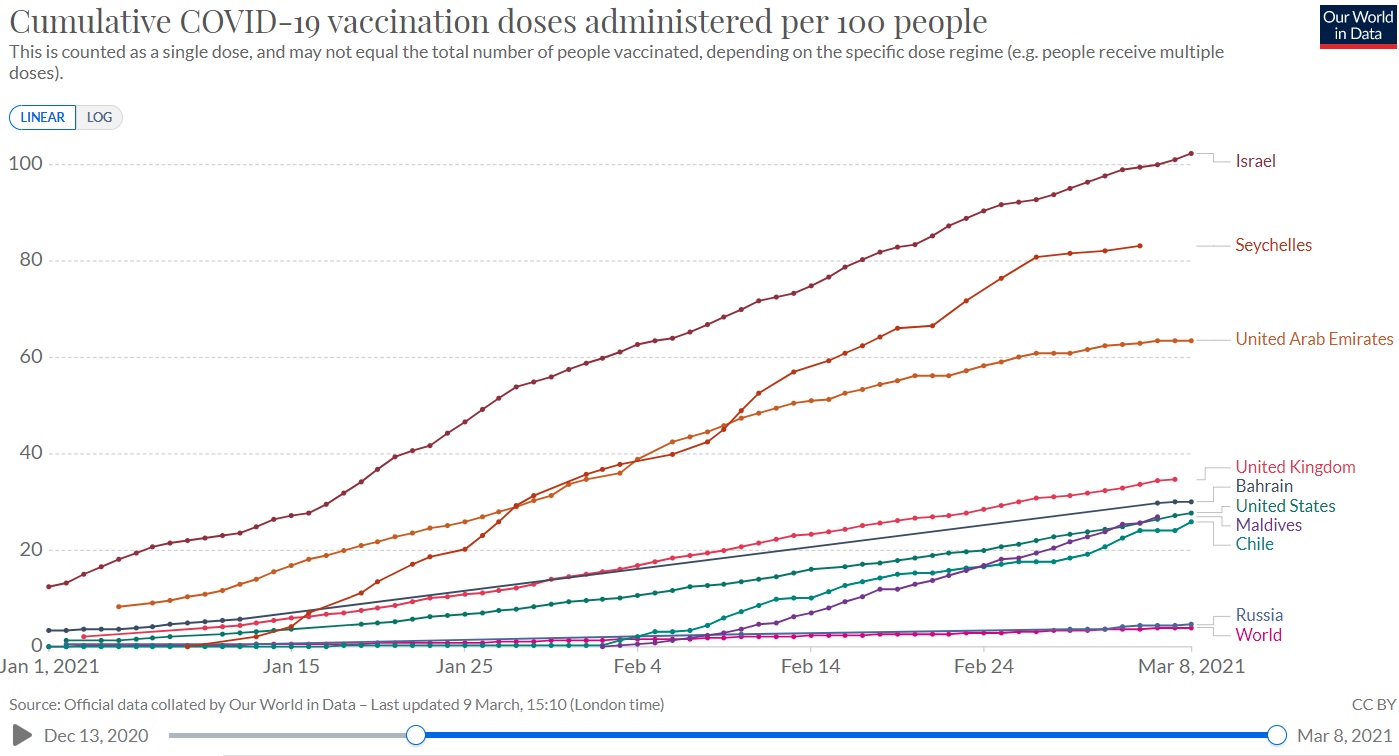 China is making some big bets. One is their wager to develop into a full high-technology economy. At the Fourth Session of the 13th National People’s Congress (not to be confused with the 13th session of the Fourth National People’s Congress–that was a wild party), China announced that it “will increase its annual research and development spending by more than 7% every year over the next five years.” This year, R&D increases will be 10.6 percent. According to Reuters, China is concentrating on seven key technology areas: “next-generation artificial intelligence, quantum information, brain science, semiconductors, genetic research and biotechnology, clinical medicine and health, and deep space, deep sea and polar exploration.” As we note in our book, China is no longer just a copycat economy but a true innovator as well. But, in the long run, how will innovation in China square with an ethos that censors and potentially bans Chinese-born Chloe Zhao, the director of the critically acclaimed Nomadland, for a remark she made ten years ago? A decade ago, in an interview, Zhao referred to China as “a place where there are lies everywhere.” Consequently Variety reports, “On Friday, a wave of censorship of “Nomadland”-related content occurred piecemeal across China’s various film and review platforms.” In the short-term we can conceive of China’s innovation working okay just as the Soviet Union industrialized with some success. In the long-term, we are doubtful it is a sustainable model.