“As far back as I can remember, I always wanted to be a gangster.” That’s what Henry Hill says at the beginning of Martin Scorsese’s classic movie, Goodfellas, which we re-watched over the weekend. It is a perfect movie, in some ways even better than we remembered it. In the first part of the film, Scorsese makes us feel what Hill feels, the allure of being a gangster: easy money and lots of it, people treat you with respect (albeit out of fear), you don’t ever have to wait in line, you get the best tables. It’s enticing, addicting, and the style of filmmaking—frenetic, cacophonous music–only makes it feel more so. Thirty minutes in and I wanted to be a gangster.

After sucking us in, Scorsese pulls the rug —an expensive one probably stolen off a delivery truck—out from under us. To have this life, is to always be looking over your shoulder and to inflict harm, including death, on others. Eventually it all comes crashing down around Hill and in order to save what is left of his life from his gangster “friends,” who are about to kill him, he testifies against them and enters the witness protection program. But, he doesn’t really learn his lesson. At the end of the movie, living in Arizona, he doesn’t regret his bad actions or understand that there were terrible trade-offs for making the easy money and living the high life, he rues that he no longer lives that glamorous, good life of a gangster. He says, “I still love the life. We were treated like movie stars with muscle.” But now he is no longer a gangster. His final words of the film, “I’m an average nobody. I get to live the rest of my life like a schnook” are perhaps the most chilling final lines of any movie in the history of filmdom. What he never learned was the real schnook was the gangster Hill, not the average person living their life. The gangster Hill was the one who was easily duped into thinking what he was doing was okay, was sustainable, was really bringing happiness. He was the fool, not the people waiting in line for a table, working regular jobs absent easy fame and false respect.

John Cena, we submit to you, is a schnook.

The Challenging China World Tour (we demand fresh beignets in our dressing room) ventures down to Oregon (via Zoom) on June 8 when we will speak to World Oregon about China, our book, and much more—perhaps we’ll tell the tale of causing a U.S. State Department official to cry. Sign up here!

In honor of Memorial Day, we’ll be off next week perfecting our barbecue skills. Back on June 10th.

The Sun Shines on Vietnam

Our likely first international trip post-pandemic will be to sunny Vietnam. You may know that Vietnam has become increasingly prominent in global supply chains as assembly continues to diversify out of China, but did you know it’s also increasingly a leader in solar power installations? Bloomberg Green informs us that solar power in Vietnam has increased “100-fold over the last two years…and now ranks seventh in the world in terms of capacity.” As Bloomberg notes, this increase in solar capacity isn’t just driven by government mandate, it is driven as much by the market. Solar prices, as we’ve pointed out previously, fell dramatically over the years and increasingly it is difficult to get financing for coal plants.* The 143.5 GW of capacity added by Vietnam is unlikely to be a fluke. We’ll see more added in the coming years, and not just in Vietnam. The clean energy revolution is occurring because of technology and market forces, originally spurred by government policy. It’s remarkable how few are noticing this transformative trend. 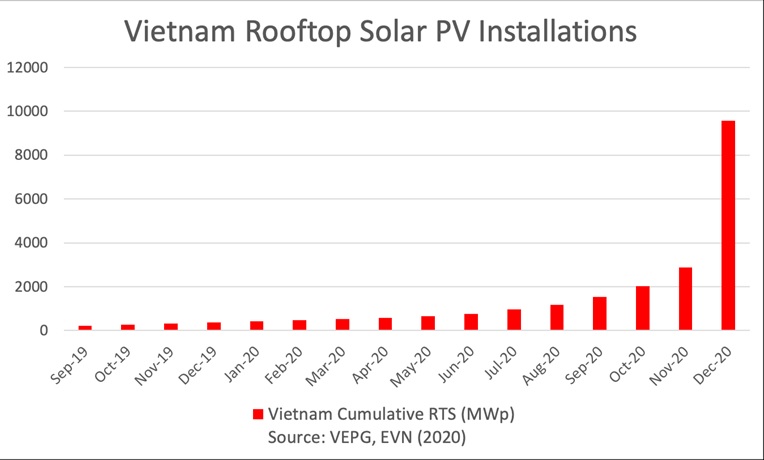 *In recent months there has been a short-term spike in solar panel prices. It is unlikely to last since supply will soon catch up to demand.

Cry For Me, Ethiopia

Conditions continue to deteriorate in Ethiopia, which a number of years ago we deemed the most underrated country in the world (Chile currently holds that prestigious INTN moniker). With Covid-19 affecting the global economy, it was going to be a tough year for Ethiopia regardless, but the conflict in Tigray has made things dire. So much so that the Famine Early Warning Systems Network, an initiative of the United Nations, warns that in Ethiopia “Millions of households are facing difficulty meeting their basic food needs and these challenges are only expected to increase during the lean season, between June and September.” The conflict in Tigray, combined with below average rainfall and worsening economic conditions are all leading to the worst famine conditions in Ethiopia in half a decade. In fact, it is possible it will reach the highest category (level 5). Unfortunately, there are no signs of the Tigray situation becoming better anytime soon. Violence is expected to escalate in the run-up to elections in June  We lament our once underrated country.

In our book, Challenging China, we detail how China is attempting to turn the post-World War II/Cold War, rules-based international order into one that will make the world safe for authoritarianism. One way they do that is working to place key Chinese officials into positions of power in important international organizations. For example, the head of the International Civil Aviation Organization (ICAO), is led by Dr. Fang Liu. She is the Secretariat General of the ICAO and previously was a key official in China’s aviation bureaucracy. Of course, the ICAO will be involved in the hijacking of a civilian aircraft by Belarus last weekend. That plane, you may remember, was flying from Athens to Vilnius, the capital of Lithuania, when it was forced to land in Minsk. A few days before the hijacking, Lithuania pulled out of the 17+1 group, a business and investment initiative between China and Central and Eastern European countries. China’s state-owned media responded to Lithuania’s withdrawal by saying, “Lithuania is not qualified to attack China and this is not the way a small country should act.” With Dr. Fang Liu, the Secretariat General, we are skeptical the ICAO will play a constructive role in Belarus’ hijacking of a civilian jet liner.