Measuring Governments, Inflation Rates and Is This China’s Japan Moment?

Even in this age of rapid change, including climate, the seasons act like clockwork as the squirrels in our yard leave summertime frolic to frantically stock up for the winter, fruit ripens on our Yoinashi pear tree in our Japanese Garden and organizations again start to hold events. We are speaking to two organizations next month, one a private event, the other public. The latter is with World Boston as part of their Chat and Chowder series. In the age of delta it is conducted over Zoom so we must all supply our own chowder (you can sign up here to attend).

At the risk of offending our Bostonian friends, we’ll be slurping Northwest style chowder from the Pacific Northwest restaurant icon, Ivar’s. We will be speaking about, of course, everyone’s favorite topic, China, and our book Challenging China. There will be no dearth of subjects to discuss including Biden’s request to meet in person apparently being rebuffed by Xi, the possibility of the bailout/default of a major Chinese real estate company (see China Corner below) and the revelation that the chairman of the US Joint Chiefs of Staff promised he would let China know before the US attacked them (we believe that’s strategy 3A from Sun Tzu’s The Art of War) because at the time there was a deeply unstable man in the White House.

In our talk at the private event, we’ll be discussing the Competition of Competence between the US and China. Some days it feels more like a slapstick battle of incompetents but nonetheless we competently bring you stories of how to measure effectiveness in governments, how inflation varies around the world and China’s possible Japan moment. It’s this week’s International Need to Know, sending healing thoughts to Wayne while trying to heal the world with international information and data.

A number of years ago during meetings in Stockholm, we learned of a Swedish effort to measure how well their city governments did their jobs. They measured everything, from how long it took to get a business permit to fire response times to other city services. We thought it was a wonderful idea and told a number of government officials in the greater Seattle area about it when we returned home. Our Seattle area readers, looking around the utopia of local governance, can probably guess at the reception our idea received. We were reminded of the Swedish idea when Marginal Revolution pointed us to a study of  “Street-Level Responsiveness of City Governments in China, Germany, and the United States.” The researchers contacted “6,000 cities asking for information about procedures for starting a new business. Chinese and German cities responded to 36-37 percent of requests; American cities responded to only 22 percent of requests.” American and German city bureaucrats were more responsive to citizens than foreigners while Chinese were equally responsive. Chinese officials were less responsive to women than American and Germans and were also less responsive to green projects. Interestingly, “Chinese cities were more responsive when the mayor was being considered for promotion than after a promotion decision, suggesting the importance of promotion incentives in China, but low responsiveness to green investment suggests limited incentives for environmental improvement.” We still like the Stockholm idea and hope our regional leaders will someday implement it. As we’ve noted in regards to infrastructure, Covid-19 and in other areas, America’s state capacity has deteriorated and measuring it is likely a good step towards fixing it. 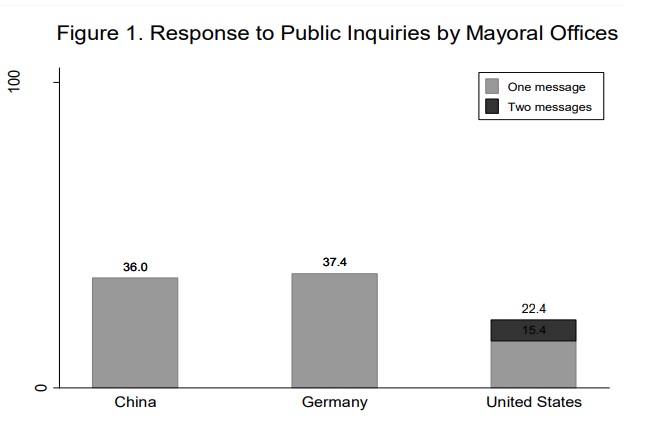 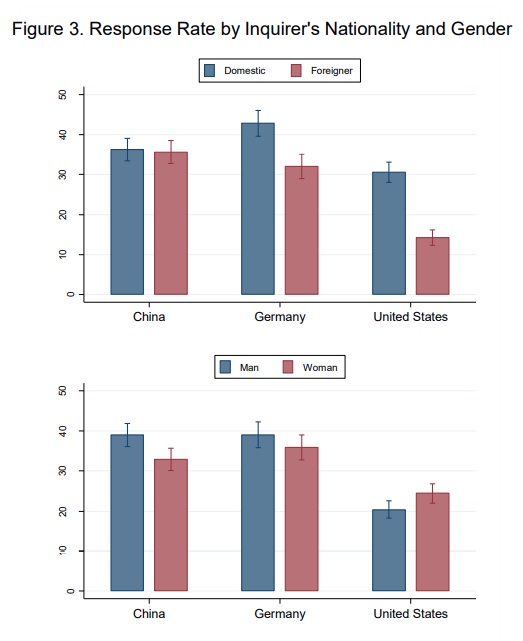 Inflation Rates Around the World

Depending on what you are spending your money on nowadays, you see large inflation or none at all. If you’re renting a car, doing a house project, buying gas or gambling on the Green Bay Packers, you’ve seen prices rise in the U.S. Other items not so much. Most of the debate about inflation has been whether it’s transitory, a temporary spike due to pandemic-induced supply chain problems, or if something more systemic is taking place due to increased government spending or other factors. But we hadn’t seen much comparison of inflation in different countries until we stumbled upon Harvard economics professor Jason Furman’s Twitter thread. He notes that inflation rates are very different depending on the country, as you see in the table below. Japan, even in the midst of the health and economic turmoil of the last two years (can you believe it’s been almost two years since the pandemic began?), has deflation, as they often do. Are aging demographics that big a counter to inflationary pressures? Furman notes there is still lots of variance in inflation among countries when you make the baseline 24 months ago rather than 12 months ago (see right hand part of table below). Furman asserts that the reason for the higher rate of inflation in the U.S. is due to our larger increases in spending (we remember on social media seeing lots of people calling the U.S. stingy when in fact the US was providing more financial support than any other country, including when Trump was president). Furman puts it like this: “For some reason, many people want to argue that the huge US fiscal stimulus had a large impact on real output but no impact on prices. The data aren’t consistent with that view–Americans got more money, were able to buy more stuff, but this also drove up prices.” At any rate, the pandemic has provided real world experiments for policy responses on how to deal with the virus but also for how to deal with the economics of the pandemic. A thousand PhD papers will be launched from this era.

Evergrande, the second-largest Chinese real estate developer, has been in the news recently, in the same way that a politician caught in a bribe or an affair is: lots of bad publicity. You see, Evergrande is in debt up to $300 billion and has $200 billion in assets that may be depreciating because of their much publicized troubles. Most expect China will have to bail out the company, perhaps even before this missive gets sent out to your lovely inboxes. We see lots of comparisons of Evergrande to Lehman Brothers and we can understand the worry since it is likely even some of our 401ks have investments tied, if not to Evergrande, then to the Chinese housing market, which could be severely affected by what happens to Evergrande. But, if we were making comparisons, we think a more apt one is to Japan’s economic malaise that began in 1989/1990 due in part to real estate speculation. China, like Japan at that time, is on the leading edge of aging demographics and in recent years experienced sustained high economic growth partly propelled by over investment. Now, we are not predicting China’s economy will crash because of Evergrande. In some ways, that its troubles have become public and that China is grappling with its real estate market is a good sign in the sense its government recognizes the leverage problem and is trying to address it. Whether they’ll be successful or not, we do not know. Our book, Challenging China, asserts that China’s GDP growth will be low in the coming years. A big question is will China have a Japan-like lost decade, and if so will it have increasing GDP per capita like Japan or one even more stagnant? In the meantime, check your 401k holdings to see how tied they are to the Chinese economy; likely more than you realize.