We finally saw some live music. Outdoors, in the rain, on a soggy Seattle weekend. Since we are unwilling to travel to New Orleans with the pandemic still in full airborne bloom, on a whim we ventured out to HonkFest at Columbia Park in south Seattle to see local brass bands perform. David Simon once wrote, and we’re paraphrasing here, the seventh best trombone player in New Orleans is the best trombone player in any other city. HonkFest, as charming and cute as it was, very much illustrated that.

The first few bands we saw only reminded us that we had seen high schoolers busking in the streets of New Orleans who were magnitudes more talented and proficient than the adults playing in the park in Seattle. While watching one band, we got a definite Dwight Schrute beet farm vibe to both the musicians and people dancing to the music. Musical culture runs deep and long in New Orleans in a way that it doesn’t in Seattle, or basically anywhere else in the world. There are musical family lineages, songs echoing in the streets, educational institutions that all create the most unique musical ecosystem you would ever hope to find. Later in the day, we found on the Party Pigeon Stage a more talented band than the rest we’d seen perform—TMB Brass band. It gave us hope even as the Seattle drizzle turned into a downpour.

And who are we to complain of talent, since we have so little of it ourselves? In fact, we were interviewed for a professional video earlier this week and each time we talked the director would say, “That’s great, that’s great…” And then he’d pause and say, “This time try it this way…” which, of course, meant what we said and how we said it wasn’t great at all. Someday, someway, we will return to NOLA to witness real talent, and we promise we will not sing, play or speak while down there. But we speak out about the World Bank’s Doing Business scandal, suicide rates around the world and the latest on China’s real estate challenges. It’s this week’s International Need to Know, no debt limit or any other limit on our attempts to deliver helpful international information and data.

Phoenix Committee on Foreign Relations – How China is Changing the World Order (pcfraz.org)

Doing the Business of Doing Business is Hard

Last week, we extolled Sweden’s efforts at measuring the effectiveness of its local governments. But, of course, measuring such things are hard, and made harder when not insulated from political pressure. This was made abundantly clear last week by the release of a report detailing how the World Bank’s Doing Business measurements have been corrupted. Doing Business tried to measure how easy or hard it is to do business in a country. But, in recent years, it has succumbed to pressure from countries to change their rankings, including pressure from China, which complained about its low ranking. Because China is now a large funder of the Bank, this pressure was effective. The Doing Business researchers “discussed methodological changes to the report that might boost China’s rating, including by incorporating data from Taiwan, and/or Hong Kong in China’s data.” And, in fact, senior leaders at the World Bank directed the researchers to recalculate China’s ranking using that data. Ultimately, however, they found other irregular ways to boost China’s ranking. After the recalculation was completed, the CEO of the World Bank, Kristolina Georgieva, thanked a Doing Business researcher for helping “multilateralism” which the researcher interpreted as “not angering China during the sensitive capital increase negotiations affecting the Bank’s future.” The World Bank is discontinuing Doing Business, though not, we presume, doing business. We occasionally get pushback for the assertions in Challenging China that China is trying to change the rules-based world order. This is a small but telling example of it. We expect more, corrupting changes are in our future. 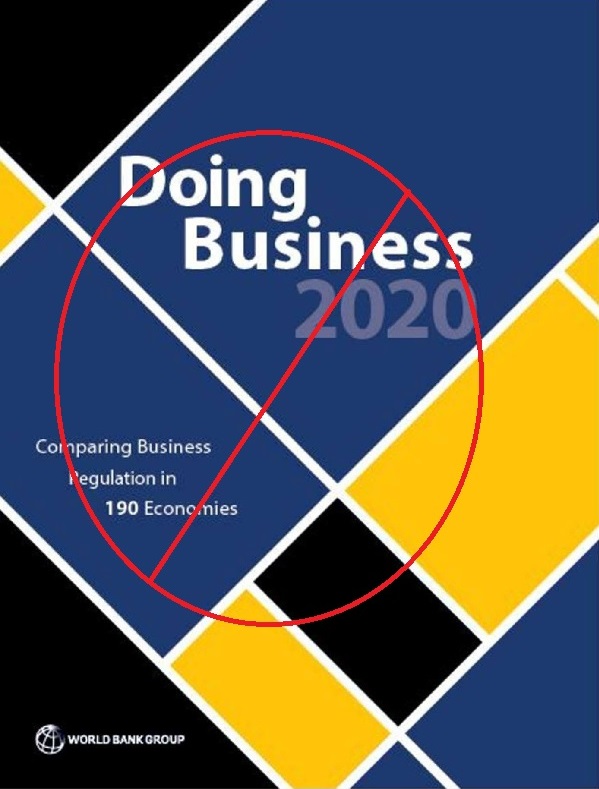 Suicide Around the World

Kevin Drum recently wrote a post about how suicide has increased in the U.S. since the year 2000 (we have a theory that September 11th was a bad pivot point for America across many vectors but we’ll save that for another day). That got us to wondering about suicide rates around the world. The U.S. is not in the top ten but it’s also not doing great coming in with the 23rd highest suicide rate in the world. Ranked number one is Lesotho with 72.40 suicides per 100,000 people, nearly double second-place Guyana. Lesotho remember is completely surrounded by South Africa which perhaps not coincidentally is 10th worst for suicides. We assumed we’d see mostly northern-lack-of-sunshine countries in the top 20 but it is not so. In fact, Kiribati and Micronesia are both in the top ten even though they most definitely are not extreme north, or south for that matter. Both are experiencing climate change stress. Could that be a factor in their high suicide rates? South Korea has the fourth-highest suicide rate in the world, the highest among wealthy countries and suicide is the fourth-leading cause of death there. Yikes. There are a variety of reasons for South Korea’s high rate, including poverty among the elderly. The list of countries with the lowest suicide rates may surprise you too. Check ‘em out below: 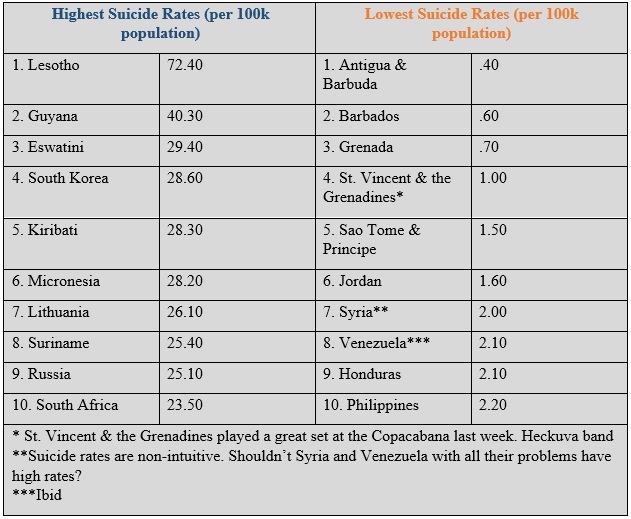 Last week, we noted the challenge China faces in dealing with the indebted real estate development company, Evergrande. We asserted if the Evergrande problems spur a lager economic crisis it is more likely to be like Japan’s lost decade than a Lehman Brother’s collapse. The prolific blogger Noah Smith has an excellent post on “China’s real estate trilemma”. In a Twitter discussion, he told me he believes China’s current economic challenges are different than Japan’s of the 1990s and he plans on writing about that. We look forward to reading it. Whatever the fate of China’s economy as the result of dealing with Evergrande, the size of China’s real estate dilemma is made very clear by the graph below from @wallstcynic. Real estate’s share of GDP in China is nearly 30 percent after rising steeply after the 2008 financial crisis and before that rising from 1997 to 2004. It has leveled off during the Xi era but it has not decreased much. And look at the difference between China and, well, everyone else. This graph illustrates  one of China’s economic challenges, one made more difficult when coupled with aging demographics. When dealing with a Challenging China, we must remember China has challenges just like the U.S. and other countries do, perhaps even larger ones. 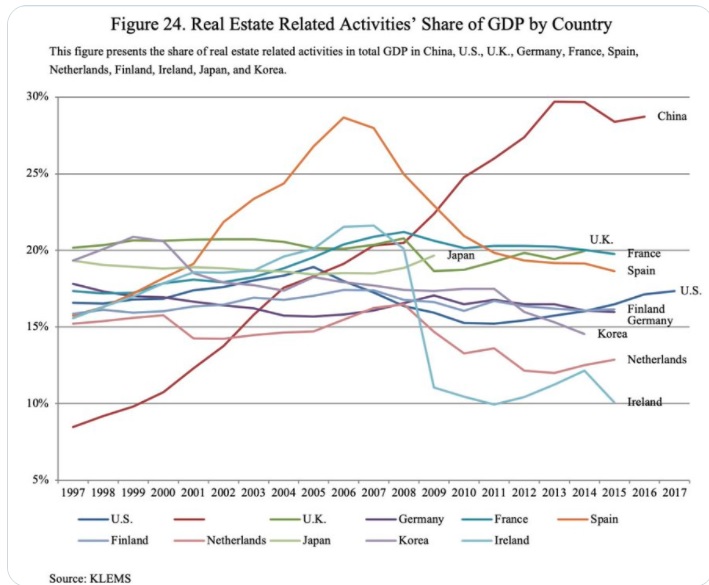 Measuring Governments, Inflation Rates and Is This China’s Japan Mome... More Hope on Clean Energy, Where the Wealth Turns and Asking the Right China...
Scroll to top