Measuring Countries By Consumption, Who Leads in Solar and China’s Great Wall

I’m not sure who built it or when exactly it was constructed but a big giant glass house envelops our world and we’re as guilty as anyone of throwing stones in it. We’ve never listened to Joe Rogan so can’t speak to the size or quality of the rocks in his hands but when reading about Neil Young not wanting to be on the same platform as Rogan we remembered his appearance on the Stephen Colbert show. There Young espoused very unscientific views about GMO food.

We asked a friend, how do we incorporate Neil’s unscientific anti-GMO propaganda into our moral calculus of this controversy? But then we remembered the day before when we took the most loving creature in the universe, our cat, Putter, to his biannual cat cardiology appointment (yes, cat cardiologists are a thing, yes they are expensive, and yes in the case of Putter we gladly pay every cent), and learned his heart had actually improved since we last saw her. Putter had a bad heart to begin with (perhaps that is the penalty one pays for having such a loving, yearning one) but it may have worsened when we fed him for awhile an “all-natural” diet sans any grains. We were suckers for the marketing of an all-meat diet that fancy pet food companies are shilling. After all, cats aren’t hunting quinoa or whole wheat bread in the wild, they assert, and we bought the logic of it.

But it turns out, our cat cardiologist told us a year ago, that such fancy no-grain food actually damages cats’ hearts. And so we took him off of it and started buying old-fashioned Purina cat food (waiting for our endorsement) which is not only healthier but also about half the price of these holier than thou foods (all savings go into a fund for the cat cardiologist). So who are we to cast stones at Neil Young or anyone else for their pseudo scientific nonsense? As we await your answer, we skip flat pebbles into the waters of how countries measure up by consumption, who are the top solar countries and the continued construction of the great wall of China. It’s this week’s International Know, which in addition to understanding global data and information, knows the one real truth is Putter is a superstar.

We told our cat cardiologist we need to get the word out about how such food is harmful to cats. She told us about walking into a pet food store with her dog (what?) and seeing someone walking out with non-grain food, hesitating for a moment, and then explaining to the customer the dangers of such food. Join us and our cat cardiologist in spreading the word.

We miss Ireland and would like to travel there again someday but while we await a slowly pulled Guinness we have been perusing Ireland’s Central Statistics Office (CSO) website after seeing a tweet about consumption data. We continue to be knee deep in comparative country data for a project of our own and so are interested in this data. CSO compiles data on Actual Individual Consumption (AIC) which covers all individual household consumption “irrespective of whether these goods and services are purchased and paid for by households, by government, or by non-profit institutions serving households.” CSO collects such data on Europe and the U.S. The data is enlightening in a number of ways, including showing how much wealthier Americans are than Europeans, as you can see in the chart below. Americans are 25 percent wealthier than Germans, for example, and wealthier still than countries usually considered the most successful such as Sweden, Denmark and the Netherlands. We’re also surprised at how much wealthier Lithuania is than Estonia, given how much attention has been focused over the years on Estonia’s economic success. We are learning that measuring and comparing countries is more complex the deeper we dig. But we continue to lift our shovel. 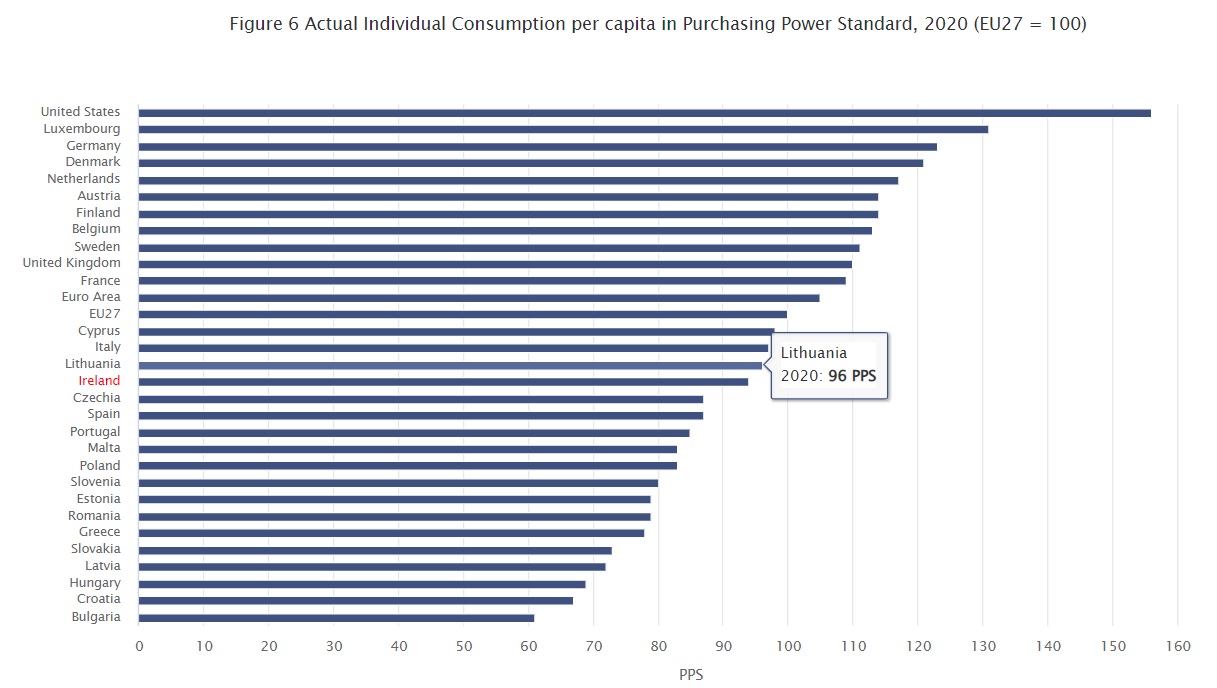 Let the Sunshine In

Many years ago, in one of our first missives in this space, we discussed how solar power was expanding exponentially and promised to see if that would still be the case in the coming years. It was January 21, 2016 to be exact when we noted: “the amount of solar generation is doubling every two years or so.” This is still true today as an article in Canary Media documented, “the world went from just over 220 gigawatts of solar installed in 2015 to almost 714 gigawatts by the end of 2020.” Meanwhile, the wonderfully named Jenny Chase, a solar analyst with Bloomberg NSF, writes “Just realised 2022 might be the first year that the largest source of new added annual *electricity generation* (not nameplate capacity) in the world is solar.” Solar power’s exponential growth is still an under told story. There’s a good chance by the 2030s that all the electric cars currently being sold will mostly be powered by clean energy, especially solar. As you can see, the U.S. and China, the world’s two largest emitters of greenhouse gases in the world, are also the two countries with the largest amount of solar power installed. Of course, China is well ahead of the U.S. with ambitious plans to install more this year. You can track this measurement and more of the Competition of Competence in our U.S. – China Index. 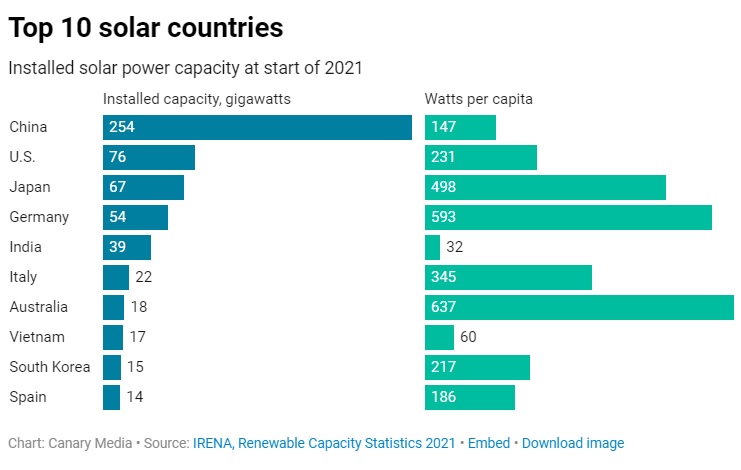 At a time when it’s more important than ever to understand China, it is becoming more difficult to do so. China has become more insular, its official data continues to be suspect and it has made it more difficult for foreign correspondents to cover the country. Not a good combination for either Chinese or folks outside of China. On the last item, the Foreign Correspondents Club of China recently released it’s latest report on media freedom and you will not be surprised to learn that China’s government has increasingly made it difficult on these journalists. In the survey of foreign journalists conducted by the organization, nearly all foreign journalists said that reporting conditions did not meet international standards (presumably it was North Korean and Belarussian reporters who thought everything was peachy-keen). Nearly two-thirds of foreign journalists “said they were obstructed at least once by police or other officials” and a quarter of journalists  “said their sources were harassed, detained, or called in for questioning by police more than once.” The crackdown on foreign media is bad in itself but ultimately it will damage China’s leaders ability to understand what is actually happening in the country and people they rule. In related news, with the financial sector opened up, Goldman Sachs announced expansion plans in China, coming on the heels of JPMorgan and other U.S. financial companies hiring and working more robustly in China. Good for those companies but this also means any analysis and information coming from these companies will increasingly be suspect. After all, they won’t risk saying anything bad about China’s economy so as not to risk their being able to do busines there. Again, understanding China will increasingly be difficult. 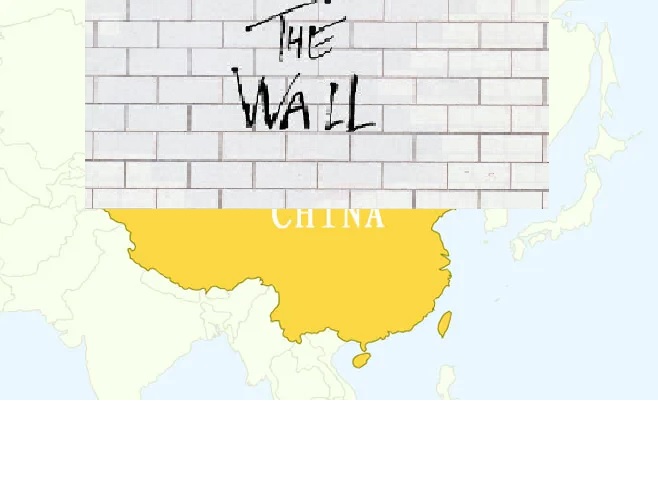