Disasters Not as Disastrous, Staid Canada and Chinese Batteries

We feel our relationship with the Seattle Mariners is summed up by one of our favorite opening lines from a novel, “John Dortmunder was a man on whom the sun shone only when he needed darkness.”* Finally, after 20 years outside the grand house of the playoffs looking in from a distant dreary patch of foul ground, the Mariners seem poised on the edge of greatness. They played well last year, made a big free agent signing with the promise of more and have the number one ranked minor league system in baseball which historically means a team is likely to be in the World Series in the next two years…if there is a World Series. Because, of course, the owners and players are stalemated in negotiations over a new contract (mostly the owners fault in our estimation) and there’s no telling when the season will begin.

So we’ve cancelled our vacation plans for Arizona to attend Spring Training in early March. That’s the bad news. The good news is the sun will shine on our favorite place in the world, New Orleans, where we’ll be traveling to instead. Of course, Dortmunder-like just as we are about to enjoy po-boys, Pimm’s Cups, beignets and more, we’ve been warned by the authorities to watch what we eat. Which we fully intend to do, keeping a close eye on those shrimp and grits as we fork them up to our mouth. While we select concerts to see in three weeks, we note that disasters aren’t as disastrous as they once were, wonder what’s going on in Canada, and examine China’s battery lead. It’s this week’s International Need to Know, going for the gold in international data and information.

*A line from the late great Donald Westlake’, which we put up with those from A Tale of Two Cities, Pride and Prejudice and Anna Karenina.

Disasters Not as Disastrous

Last month a giant underwater volcano erupted. Last week a massive snow storm hit the U.S. East Coast. Last summer we experienced a “heat dome” here in Seattle and the Pacific Northwest. Natural disasters are increasingly on everyone’s mind. All of this got us perusing Our World in Data’s entry on natural disasters to see what the trends are. There might or might not be more natural disasters than previously but what’s clear is there are many fewer deaths around the world as the result of such natural disasters. Strikingly so. Since the 1920s, humans have become much more adept at dealing with natural disasters as you see in the first chart below. But if there’s a natural disaster to be most fearful of, it’s clearly earthquakes which in the last decade killed more people than all other natural disasters combined (see second chart below). Notice, however, that death from extreme temperature is second. As you see in the third chart below (we apologize for surpassing our usual two chart per story limit—we will undoubtedly be called into the editor’s office for this transgression), the number of deaths from extreme temperatures has been increasing since the year 2000. Presumably this increase has to do with climate change. Humans need to address climate change and start adapting better to its consequences but we also need to take measures to protect from earthquakes, the hippopotamus of natural disaster deaths.*

*Hippos by far kill more people than any other animal in Africa…except the mosquito. So, the mosquito is the earthquake of animals, except more annoying. 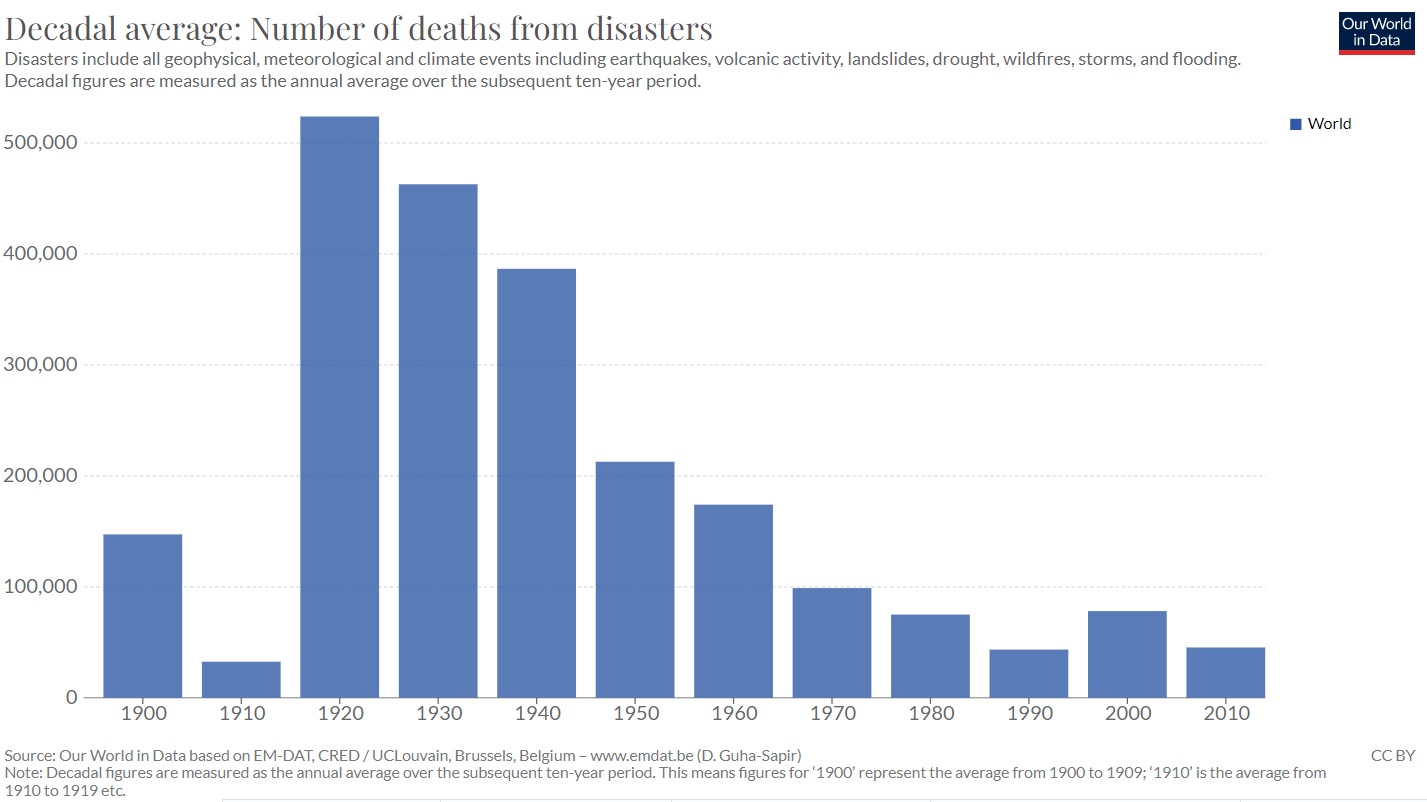 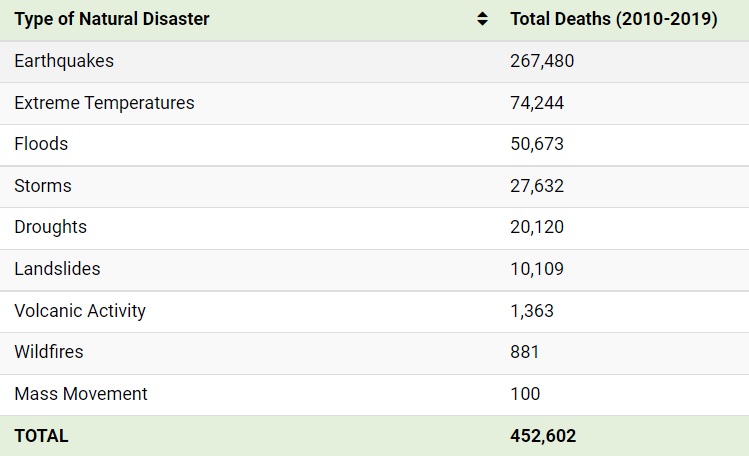 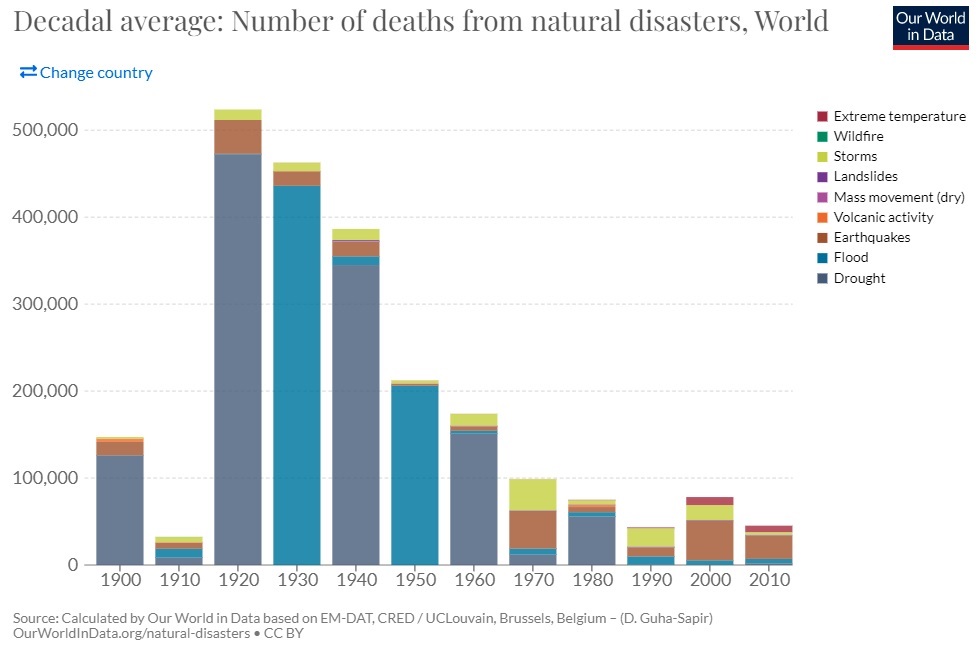 Whenever things are going south in America, there’s always a number of Americans who threaten to move north to Canada. It’s perceived as the friendlier, more sane part of North America by many, at least until the recent truckers anti-Covid mandates imbroglio. But for all its assets and benefits, Canada is not a particularly dynamic place business-wise. Its economy does fine but there is not a lot of entrepreneurial activity outside of hockey fans throwing animals on the ice. Cue angry emails from Canadians…okay, there’s lots more entrepreneurial activity than that, but not enough, at least according to a recent article at The Hub. The author notes that “the median age of Canada’s fifteen largest public companies is 122 years.” In his chart below, you can see the youngest company among the top 15 largest Canadian publicly traded companies is Shopify. It’s a stark difference compared to the top 15 U.S. publicly traded companies, listed in the right-hand column. Many of these older Canadian companies are natural resource businesses. Given the current energy transition, we will guess that some of those large Canadian companies will not be big for too much longer. A change in the composition of the largest Canadian companies will likely be helpful to getting Canadian companies to spend more on R&D which as you can see in the second chart, Canada also lags in. Now, back to throwing stuff on the ice and blocking roads with trucks. 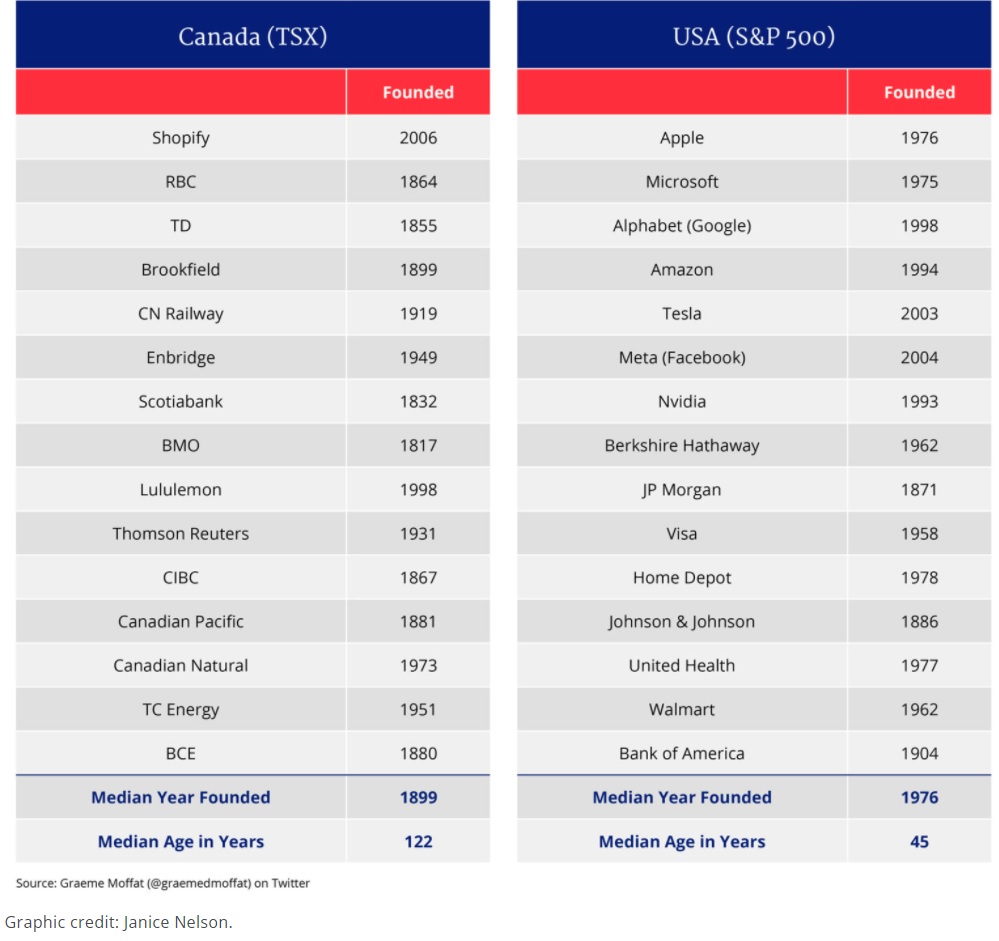 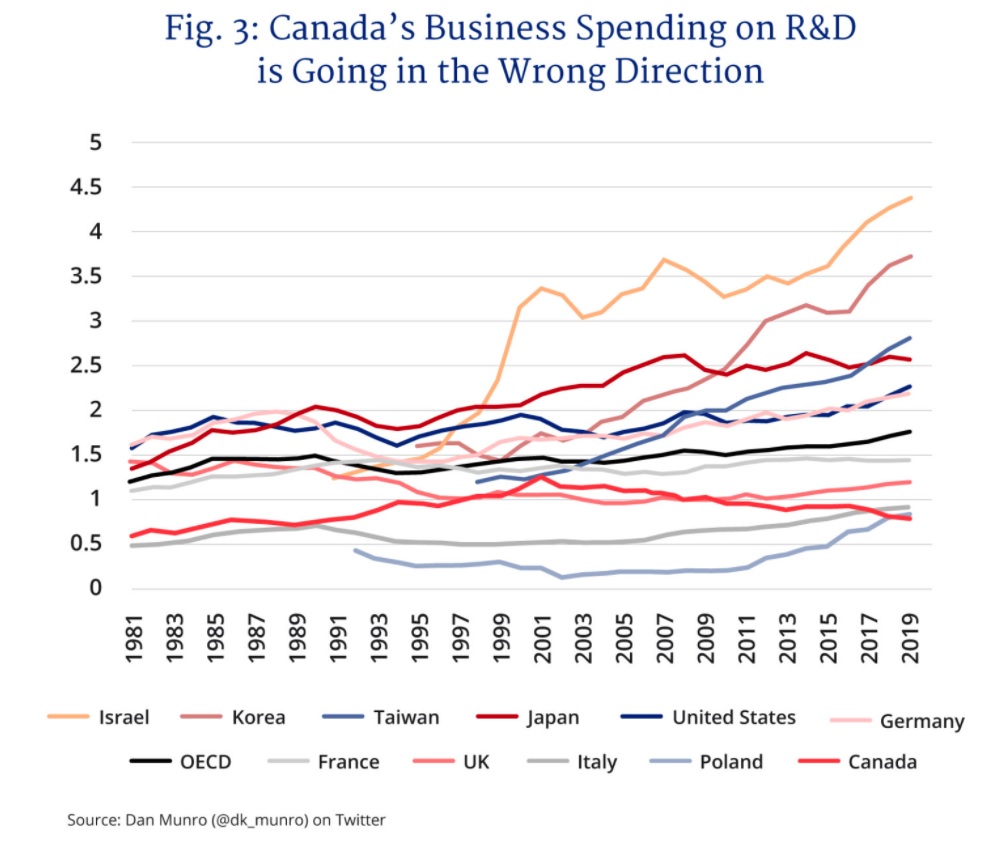 During these weeks of institutional corruption broadcast worldwide, lots of attention is focused on who is winning slalom or skating and what country they are from, but too little attention is paid to the important competition: The Competition of Competence between the U.S. and China. We continue to track it in our U.S. – China Index. The invaluable MarcoPolo.org hones in on what’s going on in the lithium battery world and its supply chain competition in a new post on their website. As you can see, in production of lithium, China is by far the leader, producing 61 percent of the world’s lithium batteries. Japan is second at 12 percent, followed by the U.S. and E.U. That’s the downstream part of the supply chain. China dominates the midstream as well, manufacturing between 40 and 60 percent of the main component parts of lithium batteries—separators, anodes, cathodes and electrolytes. Basic ingredients of these batteries, from graphite to lithium to nickel are sourced from many places in the world. Check out their full post with lots of data and insights. It will give a real charge to your understanding of the battery world.

Measuring Countries By Consumption, Who Leads in Solar and China’s Great... Farm to Car, Vietnam’s Partnership with S. Korea and will China Transform...
Scroll to top