Farm to Car, Vietnam’s Partnership with S. Korea and will China Transform its Economy

We write International Need to Know in part because too many of us don’t know enough about the rest of the world even though with each passing day what happens on the non-American part of our rotating globe becomes more important. Over the last few years we’ve realized that a corollary to this point is when Americans do think about the rest of the world it is only in relation to America as if other people, countries and institutions don’t exist except as an orbit of our country. This is certainly true for many on the right. A recent example is Richard Hanania who asserted that Ukraine used a young black boy for propaganda so as to elicit sympathy from so-called Woke Americans, claiming there aren’t any Black Ukrainians. A black American journalist in Ukraine had to explain that Black Ukrainians date back to at least the 1800s.

But we’ve discovered this self-centered Americanism is true of many on the left too who believe the root of any problem in the world, no matter how far-flung or seemingly indigenous in nature, is really caused by something America did. We see this from people who believe Putin wanting to invade Russia is somehow America’s fault, or others who somehow ascribe the decimation of Uyghurs by China’s government is because of America’s War On Terror (as misbegotten and/or executed as that may have been). Ethnic tensions in Ethiopia are seen by these Americans through our own racism challenges prism without ever thinking that other countries and people have their own faults (and strengths) completely independent of whether America exists. Americans are like the girlfriend or boyfriend who thinks everything is about them, that their significant others’ bad mood has to be about them because they are the only thing affecting the universe.

Americans need to get out of their own boxes, especially as the much larger world chest of drawers has moved on from the American Century that is now more than a fifth of a century in the past. We try and fail to do the same in being surprised by what crops are grown for, examining the Vietnam-South Korea relationship and analyzing whether China can transform its economy. It’s this week’s International Need to Know, the NBA All Star Break of international information and data, full of skill challenges, three pointers and dunks.

I had the great pleasure and fortune of working with Lili Hein for a number of years. I always enjoyed watching people misinterpret her quiet nature for being a push-over, which she was anything but. Lili did not need to talk a lot or loudly, but she was smart, strategic and stuck to her position when she knew she was right, which she invariably was. She was also a kind and caring person to her colleagues, friends and family and in helping others through her work at AISEC. And gone far, far too soon. RIP

We are not a farmer, have never been a farmer and have never lived on a farm. The garden we cultivate in our backyard is a Japanese one, with bridge, Japanese Maple and miniature pagoda, among other affects. We are growing nothing edible though some animal is eating and destroying our dwarf black mondo grass much to our distress since the plant takes so long to grow. So, you should not be surprised that we were surprised by how little of American crops and other developed countries agriculture is dedicated to food for humans. Much of what America grows goes to biofuels, a policy we’ve long asserted is misguided and serves subsidized farmers but not the environment. In other developed countries, a high percentage of crops are used as animal feed, providing nourishment to animals who eventually become food themselves. But, as Hannah Ritchie, head of research at Our World in Data puts it, “In poorer countries, nearly all crops go directly to human food. There is not enough to introduce more inefficiency.” We take two things from this: a) you can track how a country is doing economically by tracking what its crops are used for; and b) American agriculture usage will change over the next 10 to 20 years as electric cars start to dominate. We now return–Bill Murray-like–to trying to stop the critter destroying our dwarf black mondo grass. 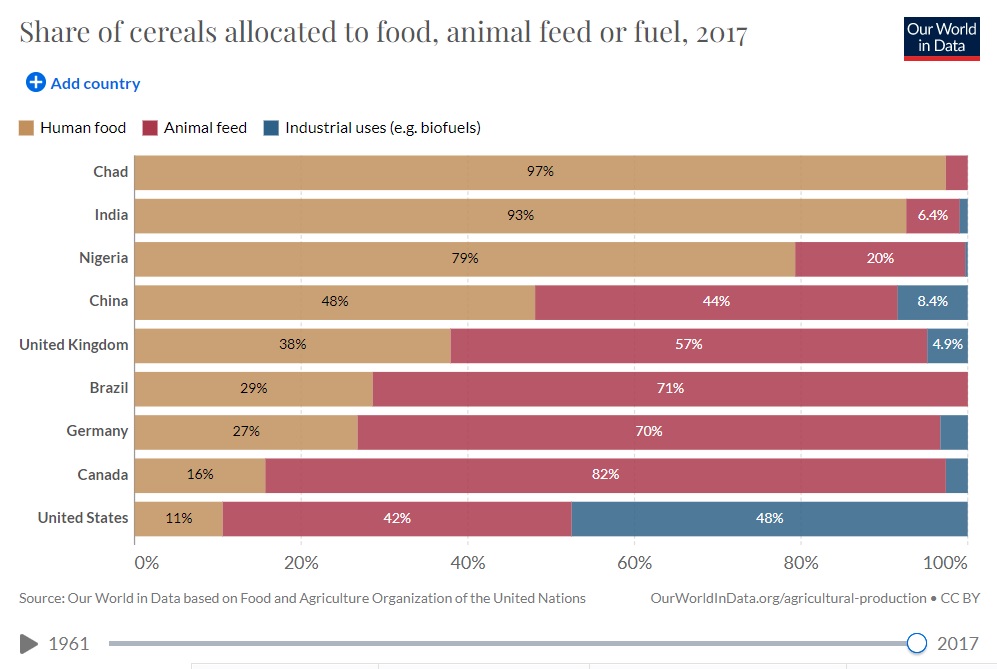 Meet For Drinks & A “Comprehensive Partnership”

We’ve long claimed that Vietnam is one of the five most important countries in the world (read Challenging China to find out why). We plan on traveling back there in September if the virus holds its variant fire. We’ve also been observing and predicting that the world, especially Asia, has moved on from American leadership. More evidence of this is Vietnam and South Korea announcing a closer relationship. During a visit to South Korea last week by Vietnam’s Foreign Minister, Vietnam announced that it has elevated ties with South Korea to a “comprehensive strategic partnership.” As Derek Grossman notes, “That is on par with China, Russia, & India. First US ally to get there.” Vietnam rates its relationship with the U.S. as only a “comprehensive partnership,” which is well below Vietnam’s relationship with South Korea. We are thinking of rating all of our relationships using such terms. Colleagues are “comprehensive partnerships” friends are “comprehensive strategic partnerships”. Our wife is a full-blown grand alliance and our cats are either a territorial dependency or our dictatorial overlords depending on your perspective. As we assess these relationships and categories, we will watch Vietnam and South Korea’s increasing investment and trade ties, and perhaps more, with interest. 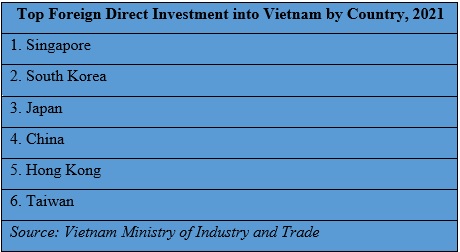 Tomorrow we have the honor and delight of talking again to a program organized by the venerable World Oregon. We’ll be talking about, among other things, China’s industrial policy. In an article World Oregon sent to its members, Jonathan Chais talks about how successful China has been economically and points to its industrial policy as giving them an advantage. Maybe so, but China is entering a new economic era, one that will see lower GDP growth, and it is doing so under an increasingly oppressive state. China wants to help its strategic industries such as robotics, AI, blockchain and more, but will they be successful? Andrew Batson points out that not only are Chinese companies getting older, but also “younger Chinese firms are also growing more slowly than they used to, mainly because young firms are investing relatively less in process efficiency and quality improvements than they had in the previous decade.” We guess that this is due to a combination of a maturing economy, an aging population, and an increasingly oppressive regulatory environment. No one knows who will be the next Jack Ma, relegated like an English football team to the lower leagues for, well, not even losing, but for transgressing against the perpetual ruling machine that is the Communist  Party of China. We are curious how effective industrial policy will be in such circumstances. 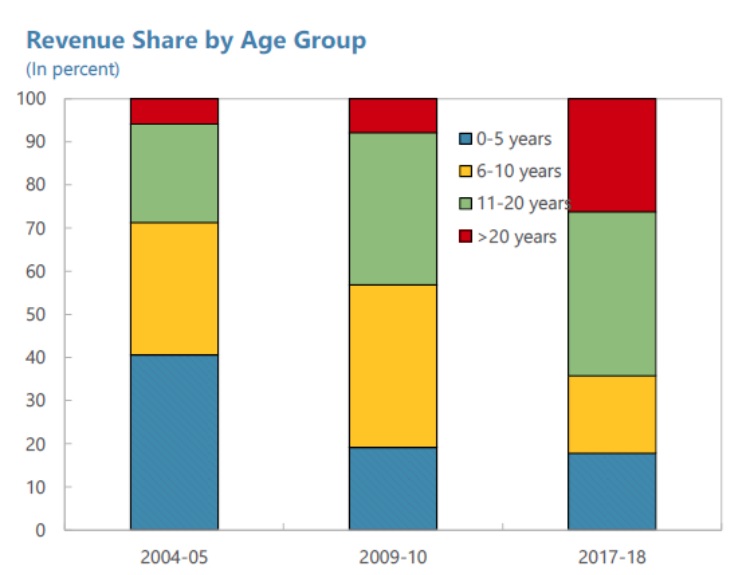 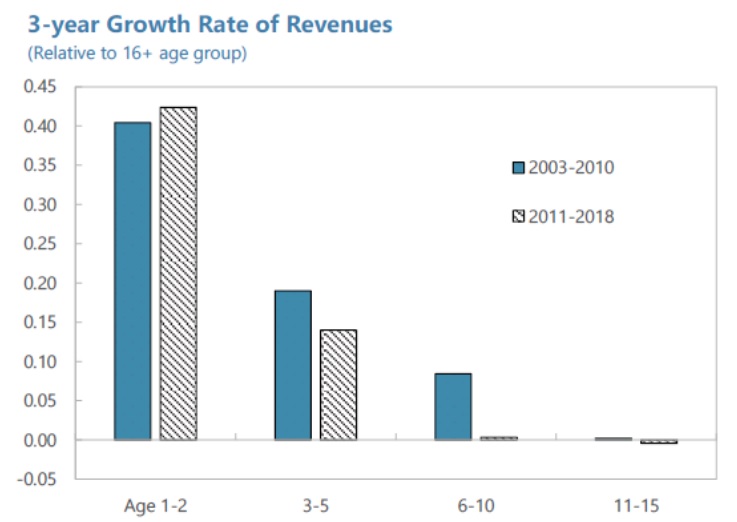