Ukraine Update: As we prepared to schedule this week’s missive, Russia commenced its long-expected invasion of Ukraine, really a continuation of its efforts to restore empire, including the annexation of Crimea in 2014 and invasion of Georgia in 2008. At a Council of Foreign Relations event some five years ago we noted the death of the post World War II/post Cold War liberalized international world order. We were dismissed summarily by those in the room who questioned our geopolitical coroner credentials. But like Jacob Marley that world order is dead as a doornail. However, Putin’s invasion seems to have stirred some parts of the anti-authoritarian world from its fitful slumbers. Perhaps–just maybe–this will help unite such leaders and countries to begin rebuilding a new one. The optimist in us hopes that Putin has not only prepared his own tomb by invading a large democracy, but has also spurred architects and construction workers to design and build helpful structures outside the cemetery. If not, we will continue down the cobbly road of the pre World War I Era with all the peril that implies. More soon on all of this.

We now resume your regularly scheduled programming
Earlier this week at a small brewery, as Mick Jagger drawled “Start Me Up” over the speakers while we had drinks with a friend, we were again reminded of a question that has gnawed at us for years. Why hasn’t a new genre of music emerged to dominate pop culture? My friend and I were the only people in the place over the age of 30 and yet the joint was playing, and the young customers were enjoying, music that I listened to while in bars in the 1980s and 90s (we were 9-years-old at the time but had very authentic looking fake ID). Back then we assumed by the 2000s that the music of the young would be as unrecognizable to us as music back then was to our parents and grandparents. But that’s not what’s happened. The last real new music genre to emerge to dominate pop culture was hip hop, which emerged in the 1970s and became dominant by the late 1980s. Electronic Dance Music has achieved a certain level of popularity but one doesn’t regularly hear it at restaurants and bars frequented by the young and even it is decades old. The music critic, Ted Gioa, wrote a very interesting essay about this phenomenon last month. The author Chuck Klosterman discusses it a bit in an interview with the economist Tyler Cowen. Klosterman also discusses the concept of the “slow cancelation of the future.” All worth considering as we at least for now seem to be floating in an age of cultural entropy—perhaps just as the universe is ever expanding into a cold distant empty space, so, too, might be our culture. But to counter that glum concept, we provide a video below of the fantastic New Orleans band J and the Causeways while grappling with the multitudes of India, how wealth is good for wildlife and why shoe companies are having troubles in China. It’s this week’s International Need to Know, working to build new genres of international information and data.

Upcoming Event: I’ll be speaking at the World Affairs Council of Tacoma on “A Competition of Competence: The U.S.-China Battle for the Asian Century. In person and on Zoom. Register to join the fun.

In honor of Mardi Gras, there will be no International Need to Know next week. We’re back on March 10th

The Multitudes of India

To paraphrase our book Challenging China, India, like any large entity, is full of disparate parts adding up to an ultimately unknowable whole. India will soon be, is likely already, the most populous country in the world, passing China and its unreliable demographic data. But India has its own challenges. After rapid economic growth, it slowed pre-pandemic and like many countries continues to struggle today. The list of the ten largest companies in India is dominated by financial companies, which surprised us, given the country’s success in technology. Its economy needs to diversify. The United State is the number one trading partner of India, followed by China and the UAE (see second chart below). You will note that Russia is not found anywhere in here* so you may have wondered, as we did, why India has been so supportive of Russia during Putin’s ongoing quest for empire restoration. An excellent thread by Tanvi Madan explains that “Estimates range from 50-80% of how much of the Indian military’s existing equipment is of Russian origin. That means India needs supplies, spare parts, tech, maintenance etc support — even in normal times.” India, you may remember, has been in border skirmishes with their second largest trading partner, China, and has actively banned Chinese apps and works to decouple from China’s economy (though not overly so, again see second chart below). India is a country we need to understand better. It contains multitudes, in many senses of the word. We can all learn together.

*Russia is a great example of a country that has undue influence due to military might, including nuclear weapons. Its GDP is a little smaller than Spain’s. It is not a very important country economically. But, of course, they are showing that unimportant countries can gain influence through nuclear and other military might. A very unfortunate model for the world. On the other hand, notice it is far easier to marshal a group of countries against Russia than against China. The latter’s economic might restricts how much other countries will push back against it, lest harm should be imposed on these countries’ companies ability to sell into China.

Wealth is Good for Wildlife 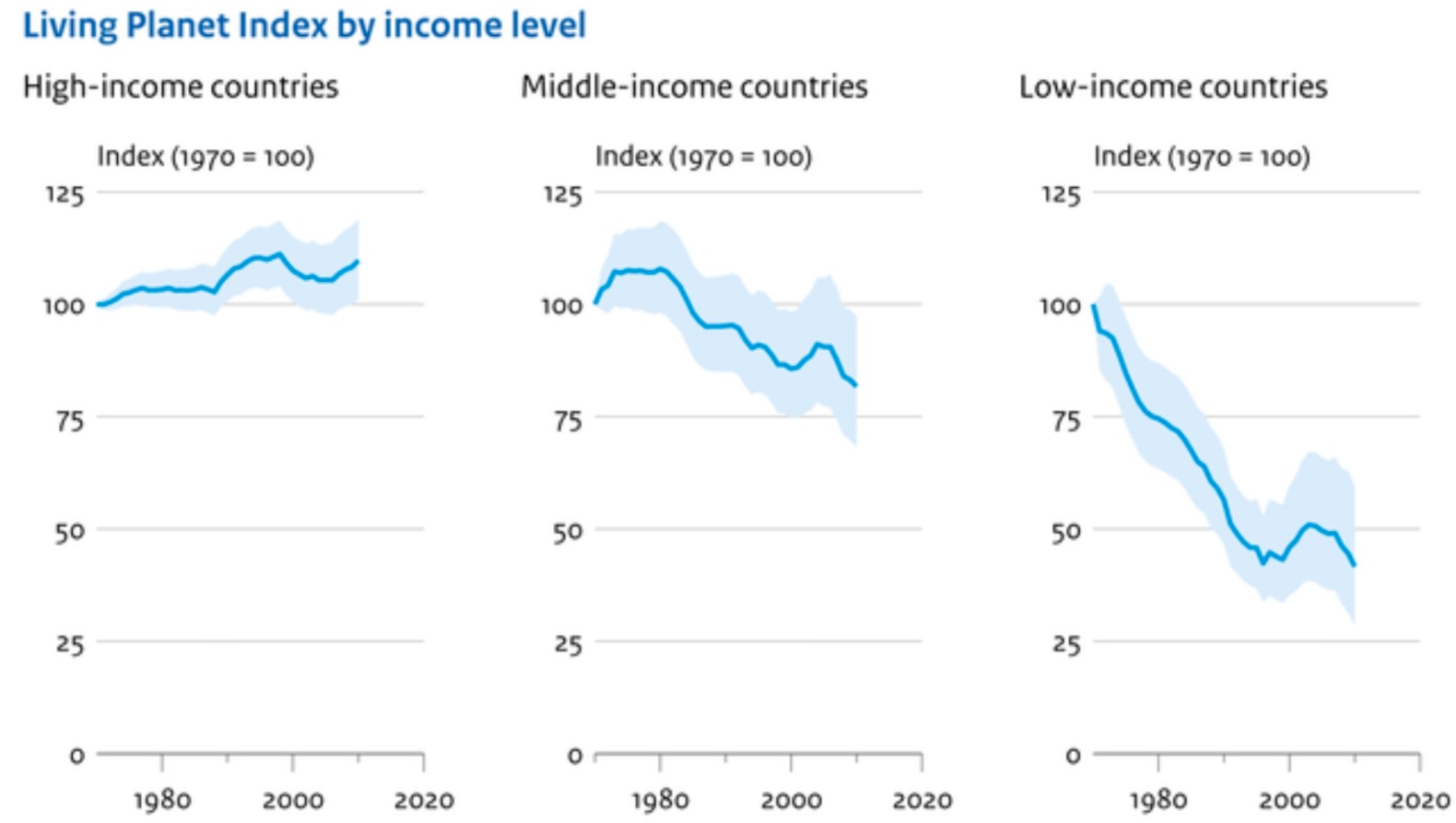 In our talks about China and in our book Challenging China we point out that China has much geopolitical leverage because of its large market. Companies want to sell to and make money in a country with such a large number of consumers. But increasingly China wants to buy domestically. China’s Dual Circulation Policy calls for it to continue to export but to build up its domestic capability so it won’t be importing as much from other countries. This is certainly true in what China deems strategic sectors and it is often true even in non-strategic industries. As China continues to close its market, as more foreign companies are shut out, it will decrease China’s geopolitical leverage. We increasingly see more examples of foreign companies finding it difficult to navigate the China market. Take athletic shoes. China is a big market for companies such as Nike and Adidas but they, like many others, have been caught up in the Uyghur slave labor controversy. Last March, both companies stated they wouldn’t use Xinjiang cotton. Consequently, they were vilified in China resulting in, as you see in the chart below from Bloomberg, significant decreases in sales of shoes and sportswear in China. Note, however, that sales also went down for domestic producers, just by not as much. This is more evidence that China’s economy continues to struggle, despite whatever official GDP growth figures they post. So the chart reveals two truths: China’s economy is weaker than many people realize and foreign companies increasingly have difficulties selling into the market. In the long-run, both weakened domestic demand and hindering foreign companies will weaken China economically, politically and geo-strategically. 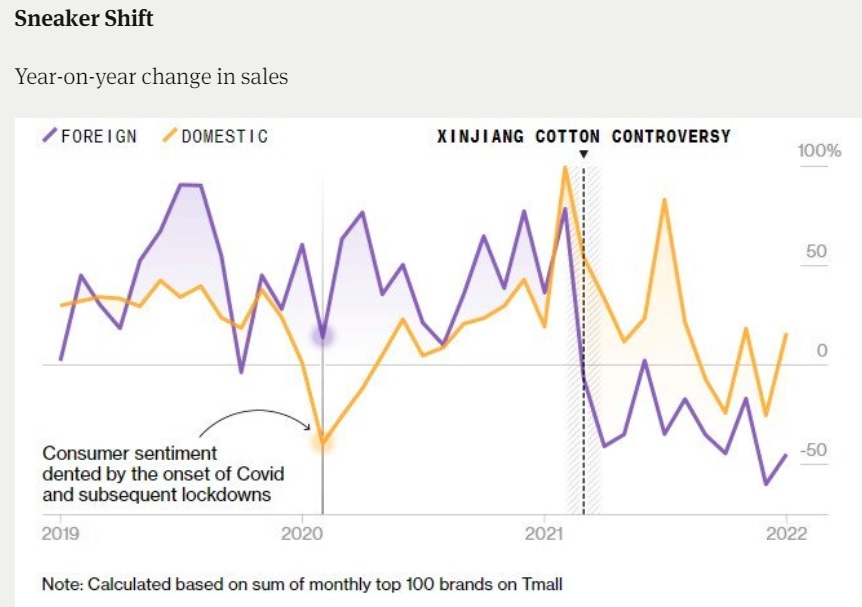 A Note on China and Ukraine: You may have missed the February 23rd press conference by Chiina’s Foreign Ministry Spokesperson Hua Chunying. It is well worth reading the transcript. Here’s one key quote from Hua: “A key question here is what role the US, the culprit of current tensions surrounding Ukraine, has played.” It is quite clear that China will use all international events, including Russia’s invasion of Ukraine, in its effort to be the dominant player in the world. And I use the word “dominant” because that is how Xi phrased it in a speech he gave shortly after becoming president when he said China must lay “the foundation for a future where we will win the initiative and have the dominant position.” We are in a battle for what the international order will look like in the coming years. All large international events, including Russia’s ambitions in Ukraine, will need to reckon with China’s ambition.

Farm to Car, Vietnam’s Partnership with S. Korea and will China Transform... Holding Ukraine, Democracy is Underrated and China is Not Russia
Scroll to top