On April 7, 1977, when we were but a kid, we attended—in person!—the first Seattle Mariners game ever. Granted we sat in the highest row of the 300 level of the old Kingdome, perched near the tiles that 17 years later would fall to the field—closer to the 727s flying above than to the field below. But we were there. That same year, one of the originators of funk, The Meters, released New Directions with the classic song, Funkify Your Life, assuring us we “can be the funkiest in town.” Way back then, Russia the Soviet Union, was repressing its people and would soon invade Afghanistan. Republicans accused Democrats of being soft on Soviet aggression. Democrats labeled Republicans irresponsible and war mongers.

Today, Russia’s army commits horrible crimes against humanity in Ukraine, and Democrats call Republicans toadies of Putin and Republicans warn Democrats are endangering our society. A dozen years after the Mariners began, Ken Griffey Jr. debuted and was dubbed The Kid by the late, great Dave Niehaus. Soon after this email lands in your inbox or social media platform, the Mariners will begin their 45th season and a new phenom will patrol center field in his debut—Julio Rodriguez—who our friend, Brian, has smartly dubbed El Niño. History doesn’t repeat but it does curve like a funky, psychedelic mobius strip. And we only wish we were confident the warped band is leading to a world series for the Mariners and justice and peace for Ukraine. As we funkify our life, we get down to the continuing clean energy revolution, the pandemic’s effect on E-commerce and China’s challenging economy. It’s this week’s International Need to Know, playing ball with international information and data.

For decades, it has been cool to be pessimistic, to see only darkness even in the clear blue light. This has been true in music, film, television and other art. And given the last decade of anti democratic trends, the last two years of pandemic crisis and the last month of Russia’s war crimes in Ukraine, it is easy to succumb to thoughts that the world is falling apart. But we reach into our data tool kit and pull out the flashlight of renewable energy to pierce through this darkness. You probably missed in the horrifying headlines that wind and solar now provide a tenth of global electricity. The energy think tank Ember’s annual report documents this remarkable progress. Ember also asserts “To be on a pathway that keeps global heating to 1.5 degrees, wind and solar need to sustain high compound growth rates of 20% every year to 2030. That’s the same rate of growth as their average over the last decade.” We chronicled this exponential growth back in 2016 and it has stayed on this path the last six years. Can it sustain such growth for another eight? We’ll find out. Even if it does, we’re not fully confident in Ember’s prediction. We need to see advances in clean agriculture and manufacturing comparable to clean electricity generation to meet the 1.5% goal and that entails technological breakthroughs. But, nonetheless, in terms of climate change, there is far more light than people realize. 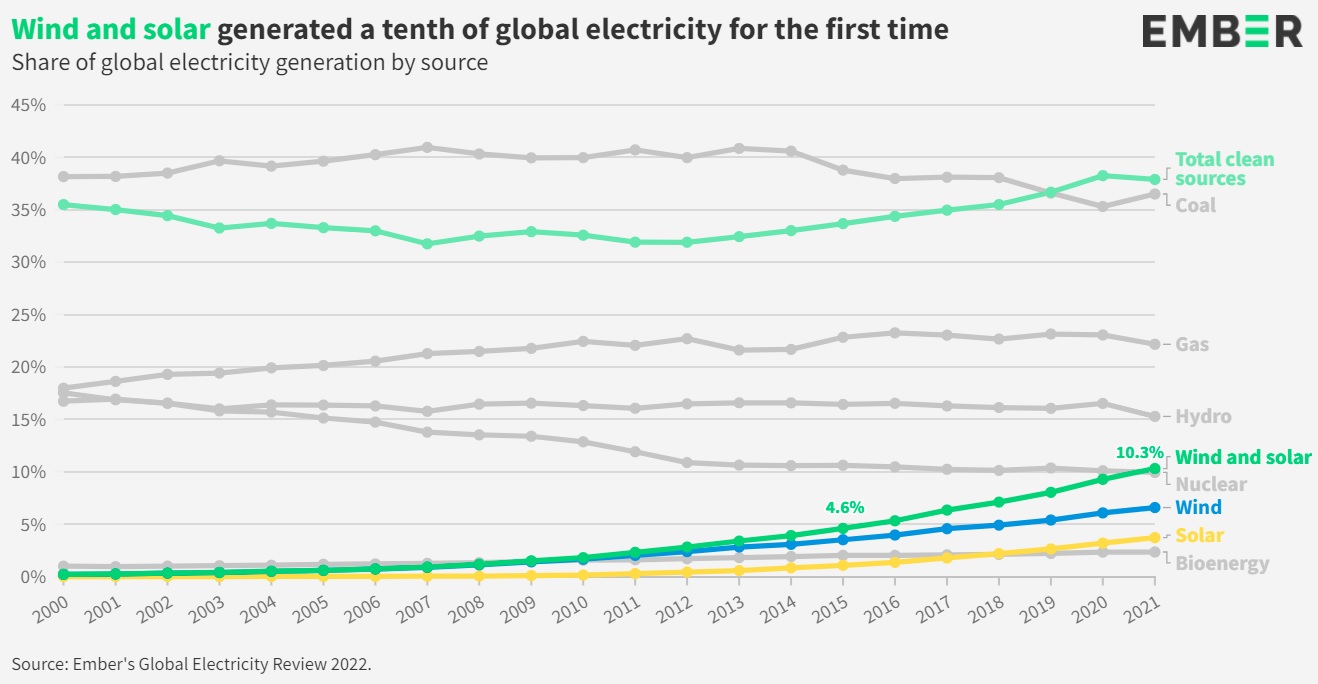 The Pandemic and E-commerce

The pandemic accelerated many existing trends including, many would claim, increasing use of E-commerce. But a recent IMF study shows a more complicated picture. E-commerce increased significantly from 2020 to 2021 but than decreased as lockdowns were reduced or ended. According to the IMF study, “On average, the online share of total spending rose sharply from 10.3 percent in 2019 to 14.9 percent at the peak of the pandemic, but then fell to 12.2 percent in 2021. Essentially the growth in Ecommerce is now at pre-pandemic trends, at least in some countries. Yes, that’s right, there is lots of variability in the data across countries. “We find that e-commerce increased more in economies with a higher pre-COVID share of online transactions in total consumption, exacerbating the digital divide across economies. For example, Singapore, Canada and the United Kingdom had high shares to begin with, and their online penetration went up even more during the pandemic. On the other hand, countries like Brazil and Thailand had low online shares pre-COVID, and they experienced less of an acceleration.” We still have a lot to learn from the pandemic (ongoing, btw) and not just about the virus itself. 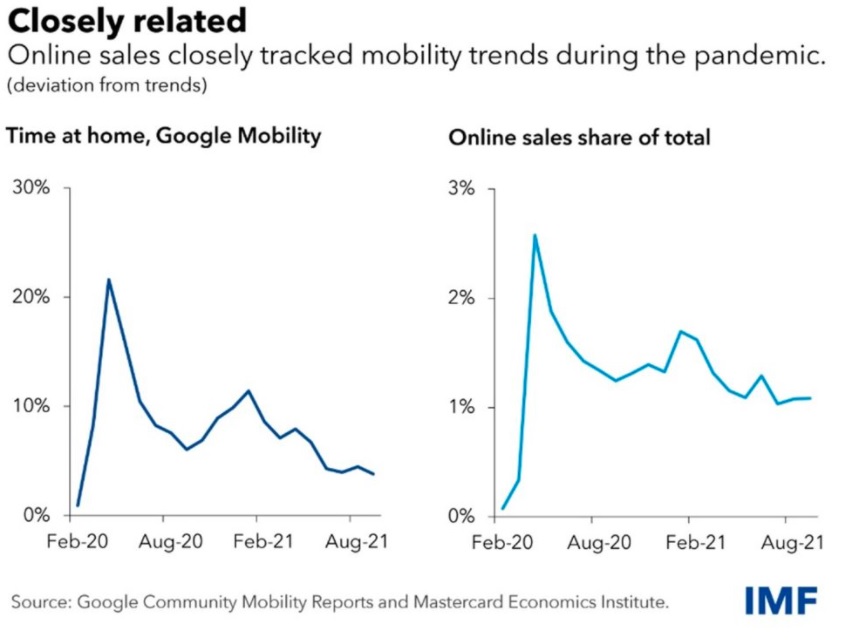 China Corner:  Where Will The Growth Come From?

In our book and in talks over the last year, we’ve pointed out that GDP growth essentially comes from two things: an increase in the working age population and an increase in productivity. Then we point out that China’s working age population has been decreasing for more than half a decade and its productivity increases have been decreasing. Caleb Watney of the Institute for Progress (Has anyone ever started an Institute for Regress?…oh, wait, that would be Vladimir Putin) has created a helpful chart documenting China’s declining increases in productivity (see below). China’s GDP growth target this year is 5.5 percent and it is taking measures to meet it, including by having provincial governments engage in more infrastructure projects. But such projects do not increase productivity so it will be empty GDP growth. We have been writing and saying for a number of years now that China’s GDP growth will be similar to America’s and Europe’s over the next ten years. In fact, depending on policy in the U.S., we could easily imagine U.S. GDP growth being larger than China’s over the next decade. We are in a new era and our expectations and strategies need to match it. 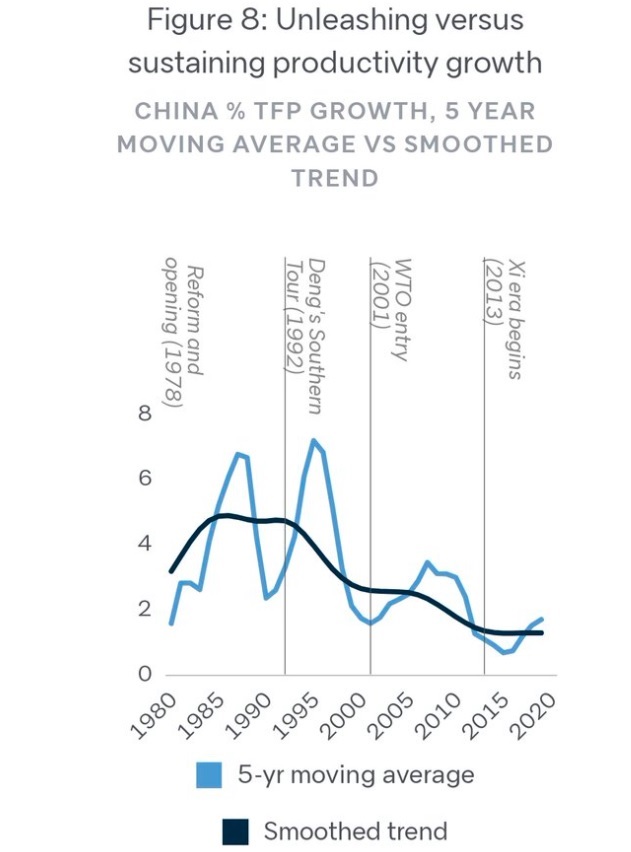 Update to last week’s China Corner: Last week we noted China is slowly changing its zero covid policy to a 0.9 policy. But since then, China has more or less shut down Shanghai so it’s now perhaps a 0.4 policy. You can see angst from those shut down here and here. And, despite a number of people telling me Shanghai’s Covid outbreaks would not affect supply chains, you can see congestion at Shanghai Port, the largest port in the world, is bad. Presumably, China will contain Covid in Shanghai as it successfully did earlier in Shenzhen, but it will do so at great economic and social cost. 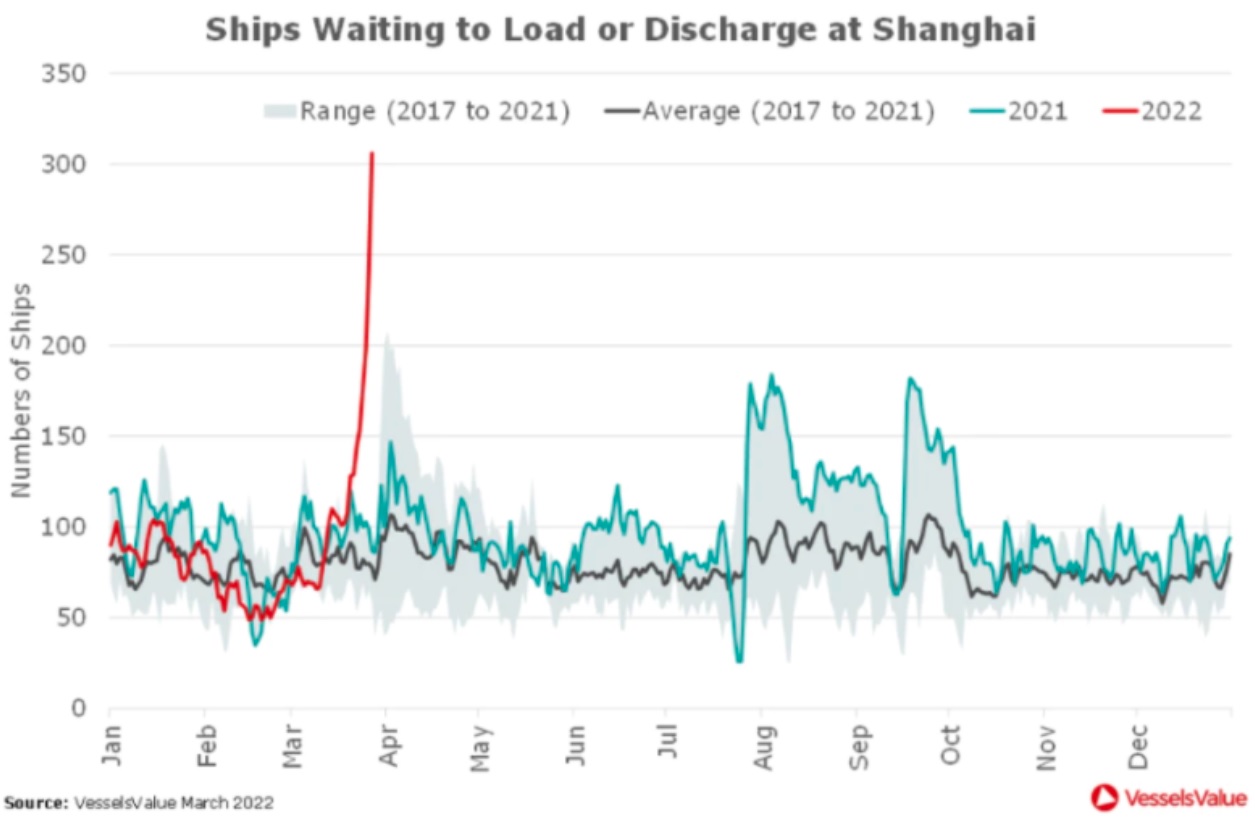 Don’t Believe the Wheat Hype, Talking Turkey Religion and Painful Adjustments... The Great Immigration Competition, What Indonesians Think, and How Long Will...
Scroll to top