This week came news that China’s Sky Eye Telescope may have detected radio waves emitted by aliens from a distant world. Or not. The “persistently active repeating fast radio burst” spotted by the telescope may merely be radio interference from Earth. Or, as the linked article notes, it could be, as happened in similar radio wave detections years ago, signals emitted by a microwave in the staff room of the observatory in Guizhou Province. It’s hard to tell. Regardless, we have changed our mind about space aliens. Not whether they exist but if they do and they someday are able to make contact with Earth, whether that will change anything.

Once, when we were young, idealistic and perhaps a bit naïve (a mere year or two ago), we assumed the discovery of other intelligence in the universe would be transformational for our world. People would view Earth, and each other differently. Philosophies, religions and attitudes would all go through deep and profound adjustments. But now we think such a discovery, even direct contact, would last only for a brief news cycle and then people of all stripes would again be complaining about one thing or another, whether, depending on your current worldview, academics, business people, Hollywood, economists, this race or that ethnicity, and all the rest of our tiny evolutionary-bound obsessions.

In fact, even if attacked by aliens we wonder if instead of coordinating ourselves to play Slim Whitman’s cover of “Indian Love Song” to defeat the aliens as in the much underrated 1996 movie, Mars Attacks, we would descend into fights over if it is appropriate to play such a song, debate if Spotify should be reimbursed under the Defense Production Act, argue if there should be export controls on certain countries using the song and engage in a host of other arguments, petty and profound. By the time we made a decision, the Martians’ ray guns would have incinerated us all…except, of course, for Tom Jones. But even if we are now wiser and perhaps more cynical, we still present a story of good news due to globalization, what countries think of each other and top it all off with whether China’s corruption crack down did any good. It’s this week’s International Need to Know, like the NBA finals bringing surprising, intriguing and crucial international information and data.

Each year the Alliance of Democracies, a foundation started by a former Prime Minister of Denmark (What? you thought one of Kim Jong-Un’s cousins would be behind this?), produces a Democracy Perception Index in which they survey some 50 countries about a variety of topics. The whole survey, released in late May, is worth perusing, but we will concentrate on two parts of it here. In the first table below, you can see the percentage of people in selected countries who favor cutting economic ties with Russia because of its invasion of Ukraine compared to who would favor cutting ties with China if it invades Taiwan. Essentially, Europeans are more in favor of cutting ties with Russia than they would be with China, and Asians the reverse. It’s interesting that there is less inclination to cut ties to Russia in Germany and France, whose two leaders have been less helpful to Ukraine than most other European countries. The second chart shows favorability perceptions of Russia, China, the E.U. and U.S. The three countries holding the most favorable views of Russia are Russia (duh), China and India. It’s also interesting that countries that have a high opinion of the E.U., usually have a slightly higher opinion of the U.S. It’s also instructive how unpopular the E.U. is in Germany and France. Lots to worry about in all of this if you are the worrying type. Which is why our next story brings good news. 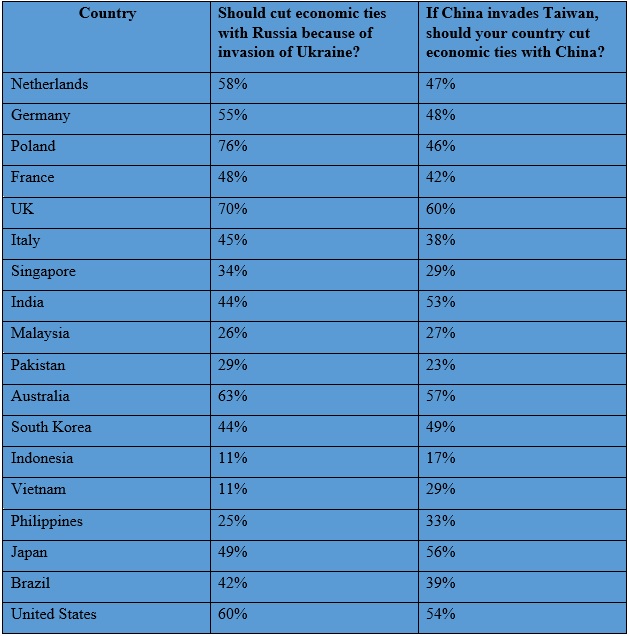 Source for both charts: Alliance of Democracies Democracy Perception Index

Bad news continues to be posted, printed and broadcast widely these days and there certainly is plenty of it what with wars, inflation and a continuing pandemic. But good news is out there too, even though it always has to enter by the backdoor. So this week we lay down the welcome mat for such news. For example, Eric Topol asserts we may have reached a turning point in treating cancer pointing to four studies published last week that describe remarkable results using new technologies. One of those used immunotherapy treatment after genomic diagnosis and all 18 patients had complete remission of their tumors. There were also breakthroughs on breast cancer and on the dreaded pancreatic cancer. Last week also saw multiple news of additional progress in quantum computing (here and here). Quantum computing would allow for exponentially faster processing and the ability to solve challenging problems. Meanwhile, roboticists in Tokyo, “built an articulated robot finger that’s seamlessly covered in living human skin.” You are probably saying, “wait, that’s not good news, that’s a step towards The Terminator!” Well, yes perhaps, but also pretty cool nonetheless. The common thread among all these breakthroughs? It is not one solitary genius but rather institutions collaborating around the world (America, Japan, Australia and others) and, of course, immigrants, especially here in the U.S. The world becomes better, despite what you might hear, through globalization and collaboration.

There has long been debate about the corruption crackdowns that Xi Jinping instituted upon becoming top leader that swept up thousands of party leaders at the local, provincial and national level. Was it about cleaning up corruption or was the purpose to allow Xi a firmer hold on the levers of power? The answer is both, of course. On the former, more evidence is presented on the need for cleaning up corruption from a new study by two researchers at universities in Hong Kong. They state, “using data on over a million land transactions during 2004–2016 where local governments are the sole seller, we find that firms linked to members of China’s supreme political elites—the Politburo—obtained a price discount ranging from 55.4% to 59.9% compared with those without the same connections.”  Provincial and local governments policies helped lead to the real estate bubble plaguing China the last year. So how did Xi’s corruption crackdown affect insiders getting discounted prices? According to the study, “a reduction in corruption of between 42.6% and 31.5% in the provinces either targeted by the central inspection teams or whose party secretary was replaced by one appointed by Xi.” Corruption needed to be cleaned up, and it also served the purpose of giving Xi more power. It was win-win from his perspective. 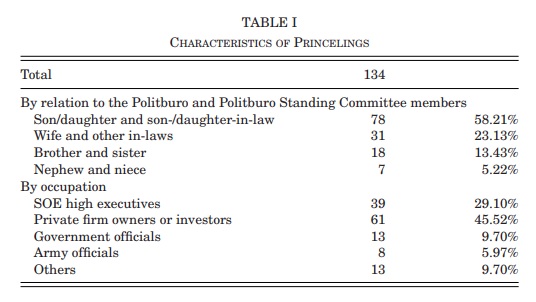