Did US Cause Global Inflation, Japan Spins Gravity and China’s Continuing Economic Crisis

For the first year and a half of the pandemic we felt we had a pretty good understanding of it, or at least as well as a lay person could of a novel virus flowing all over the world. In fact, despite our lack of expertise, we felt we had a better grasp than many of those in charge of protecting us. Early on we created our own Excel spreadsheet to track local infection rates, deaths and other data because the data put out by the government and broadcast by the media was so bad. We followed medical and other experts on Twitter, read many articles and papers and generally tried to be a well-informed citizen. However, for the last many months, we’ve found that impossible to do, even from a practical stand point. Case in point: when should we receive our second booster? Two people we know have told us in the past week that their doctors either told them it didn’t matter or they should wait until the fall to get their booster.

Eric Topol has posted studies showing that the second booster does significantly reduce the chances of one being hospitalized or killed by Covid. But for the new variant the second booster is not as impactful though still helpful at least for a short period of time. Should we take it now or a few weeks before our international trip in September? Further, human trials started a number of months ago for a pan-corona virus vaccine. Plus, there has been work on variant-specific vaccines. Should we wait for those? But we read conflicting information about their progress and effectiveness. The now almost entirely useless CDC and FDA are horrible about providing progress reports much less trustworthy actionable advice on what to do. They are non-transparent and their messaging is not based on science or treating their audience like adults but rather amateur pseudo-psychological guessing on what might be effective communications. And so, unable to understand what is going on, we turn to what causes inflation (we’re not sure about this either!), Japan’s spin on gravity and China’s continuing economic crisis. It’s this week’s International Need to Know, trying to be the Seattle Mariners of the last two weeks of international information and data.

Did U.S. Fiscal Stimulus Spur Inflation in Other Countries?

As we wrote a few weeks ago, we continue to believe economists don’t understand inflation as much as they claim they do. In fact, on Twitter we replied to Noah Smith talking about so-called “expectation-driven” inflation with: “Explanations of and cures for inflation sound so medieval to me. Like we’re describing evil spirits & using exorcisms, leeches and blood letting to combat it.” But given the large impact of inflation on the world’s economy and politics, we feel obligated to keep you up to speed on explanations for it, as dubious as they may be. We felt the last U.S. pandemic stimulus was too large and others warned it could lead to inflation. But when inflation increased in many countries around the world, we presumed factors other than stimulus caused inflationary increases in the U.S. After all, how could U.S. federal government spending cause inflation in other countries? However, a U.S. Federal Reserve paper tries to assess the impacts of the U.S. fiscal stimulus on other countries’ inflation rates. In other words, the theory is American fiscal packages might have increased inflation not just in America but elsewhere. The Fed study purports to show “The steep surge in goods consumption in countries with large fiscal support may have also created extra demand in other countries through an increase in demand for imports. This demand surge was met by limited supply capacity.” Countries with close trade and economic ties to the U.S., such as Canada, saw their inflation rates impacted more than countries with less close ties as you can see in the study’s chart below. The authors note the limitations in their analysis. We’re not sure we buy their argument but in the interest of being fair, we present it for your perusal. 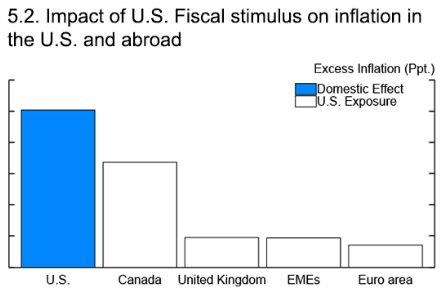 Putting a Spin on Gravity

Space was in the news last week with the remarkable photos of our universe courtesy of the Webb telescope. When we were a child, we would have expected that in 2022 space travel would be routine. But like so many things we believed as a kid—Santa Claus, the Mariners going to the World Series, the Rolling Stones retiring—we were wrong. One of the challenges to humans living on the Moon or Mars is that pesky force, gravity. It’s not particularly good for humans to live without earth-level gravity. But researchers at Kyoto University and the Kajima Corporation in Japan are working on solutions to the problem. They released a plan that would use centrifugal force to increase gravitational forces on the Moon and Mars to Earth-levels. They would develop ”massive, spinning cones that will use centrifugal force to simulate the effects of Earth’s gravity. These spinning cones will have an approximate radius of 328 feet (100 meters) and height of 1,312 feet (400 meters), and will complete one rotation every 20 seconds, creating a 1g experience for those inside (1g being the gravity on Earth).” Now these won’t be ready until after 2050 so don’t book your trips to the Moon anytime soon. Nonetheless, perhaps our grandchildren will enjoy the adulthood we expected. Watch the spiffy video below.

Recently someone told me their financial advisor said it’s a good time to buy Chinese investments. We explained ever since China opened its financial markets to foreign firms, Wall Street has been saying it’s a good time to invest in China. And every time these sales people have said this, these so-called analysts, they have been wrong. You undoubtedly saw China announced low GDP growth of 0.4% for last quarter. But in reality it is likely China had negative growth in the second quarter. Retail sales were down 0.7 percent, when adjusting for commodity prices and currency, and imports were likely down last quarter as well. So consumer demand is obviously hurting, as one would expect with all the Covid shutdowns taking place in China. Meanwhile, there have been bank runs and protests as the banking/property crisis expands. This has been made worse by many residential development companies selling apartments “pre-sale,” that is sold to customers before the apartments are finished. But these companies now don’t have the money to finish the apartments and need to do more pre-sales but folks aren’t buying. And worse, those who were pre-sold are increasingly refusing to make their mortgage payments until they take possession of a finished apartment. Houze Song of MacroPolo states, “Since 2019, more than $5 trillion worth of apartments have been sold through presale.” Yeah, that’s a problem. In addition, we continue to see outflows of investment from China even as inflows increase into other emerging markets. People don’t believe me when I say there is a good chance China’s GDP growth rates over the next ten years will be lower than America’s. We could be wrong but we’re almost certainly more right than the compromised Wall Street analysts. 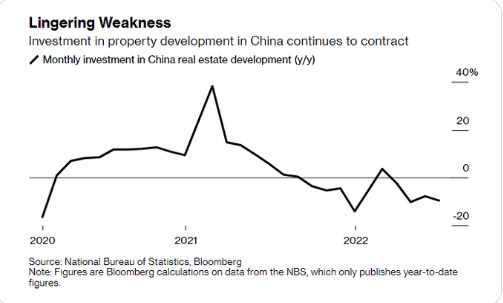 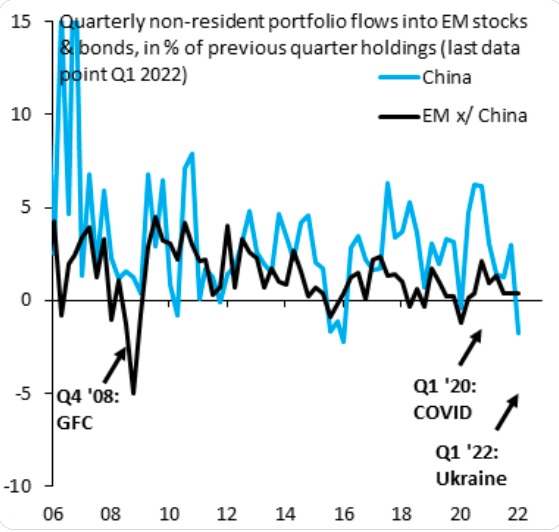 Erstwhile in Myanmar, The Fake Cricket Match and a Smaller China Ukraine’s Fight for Survival, Pakistan’s Economic Problems and the...
Scroll to top