Bullets Not Bullets, Electricity and Wind are Winning and China’s Closing Door

Last Friday we decided to get a drink in the neighborhood and so stopped in the Shanghai Room of the North Star Diner to order ourselves up a whiskey and soda. It turned out to be open mic stand-up comedy night. Entertainment, including amateur hour, was not our original plan but the International Need to Know spouse (INTNS) and I decided to give it a chance while we sipped our drinks. The performances turned out to be like an oral Twitter comments section. All the basics were covered: racist jokes, unfunny bordering on disturbing ramblings about sex, and the least keen insights you’ll hear from animals claiming to higher intelligence. Aspiring comedian after aspiring comedian got up on stage and mimicked the attitude and tropes of comedians they’ve watched on television but without a single interesting thing to say. In many cases it felt more like they were going through therapy on stage rather than trying to make other people laugh.

But we are not a psychologist and if we were we would more likely have called in law enforcement worried these are future mass or serial killers than offered any helpful advice to them. We were, as INTNS said to us, the only civilians there. Everyone in the bar except for us were aspiring comedians waiting to take the stage. A more sorry lot we have rarely seen. We told INTNS, “this is the only thing more depressing than the Mariners last two playoff game heartbreak losses (little did we know the 18 inning, six and a half hour tragedy in store for us the next day). Finally, just before we pounded our drinks and left the bar, a quiet guy seated at the table next to us nursing a beer sauntered up on stage…and recited a very funny haiku about toast. Haikus are probably intrinsically funny and when you combine them with toast? Well, it’s comedic magic. There is always one redeemer in the crowd. And we come to redeem our world at a pivotal moment by assessing how bullets are both helpful and harmful, ask if wind and solar are winning and gaze at the dark door closing on China. It’s this week’s International Need to Know.

Bullets and Not Bullets

Where many see dark gusting winds in the world what with wars, pandemics, climate change and other great challenges, we see a hinge point, with the possibility of an opening to new freedoms and solutions or a heavy thud closing, locking in a grimmer future. Recently the door opened ever so slightly wider, perhaps creakily so, with Ukraine gaining the advantage and brave Iranian women leading the charge in protesting the authoritarian rule of its country. Bullets will play a key but opposite role in the outcome of both places. Ukraine’s ability to turn back Russia depends on the West, especially the U.S., to continue to provide it with the arms to destroy Russia’s army in Ukraine. There are well publicized risks—nuclear and otherwise—to doing so, often publicized by those either too sympathetic to Russia or lacking the imagination to a door opening to a better world. For make no mistake, if the West turns back from Ukraine, and Russia recovers and wins, the door closes nearly shut. In Iran, the fate of the counter-revolution lies in the hands of Iranian rulers and their military theocratic mafia as to whether they are willing to shoot, to kill, to bloody a large swathe of their fellow Iranians. As is always the case in such situations, there is never an indication of a faltering of murderous will…until there isn’t, at which point the regime falls. Ukraine and Iran. One land’s fate is decided by the provision of bullets, the other by the possible unwillingness to use them. 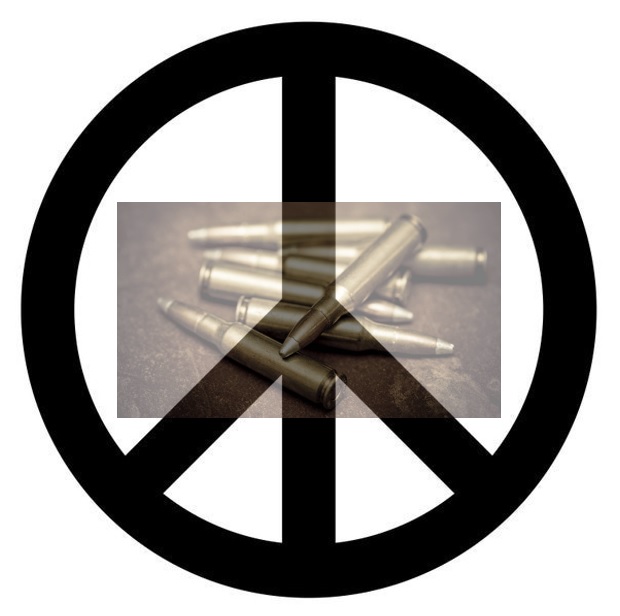 Electricity and Wind are Winning

The climate change parts of the hinge are not as dramatic as bullets but important just the same. And here we continue to see positive news. Via Noah Smith, we learn from Bloomberg that “most of the new electric generation capacity being added in the world is solar or wind (see the first graph below). Last year, 50 percent of new electric generation was solar and 25 percent wind. And at the same time, India, one of the two largest countries in the world and a key to combatting climate change, is turning away from coal, as Smith puts it. India is installing far less coal than in the past and increasingly turning to solar. The Economic Times reports, “…since 2015, India has seen over 326GW of [coal] projects cancelled, including more than 250GW of shelved capacity. This means almost 7GW has been scrapped for every 1GW that has gone into operation.” Why? Because solar is now far cheaper than coal. India is on pace to build 175GW of solar power capacity by the end of the year. Plus, there continues to be progress in power storage via batteries and other technology. The door to a better world is slowly opening, even if some want to close it and others mistakenly think it is already closed. 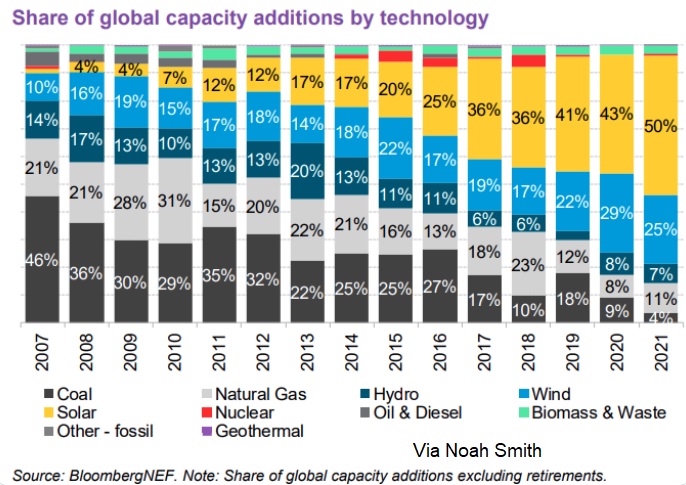 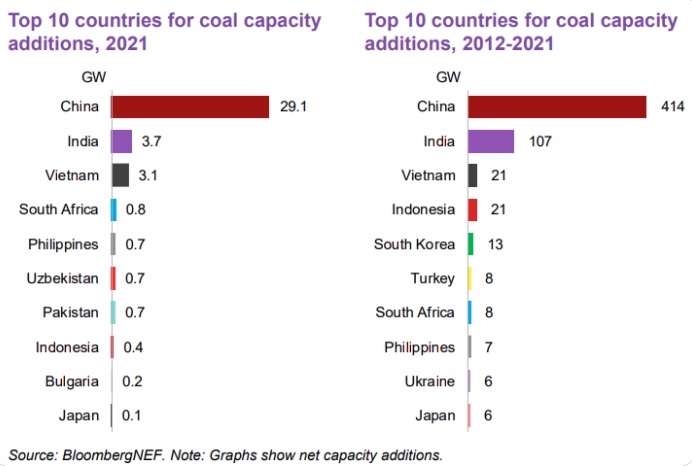 The door stubbornly stays shut in China. Xi Jinping gave a one hour forty minute political speech to open the 20th People’s Congress on Sunday. That sounds long, but it was nearly an hour shorter than his speech to the 19th Congress. If he’s still kicking during the 21st Congress maybe that one will be shorter than an episode of Law and Order. Near as we can tell, the two most important ideas to glean from the long speech are a) the section about Taiwan eventually becoming China received the most applause and b) China continues to be ambitious to be THE power in the world. On the latter, much of Xi’s speech on Saturday was about China’s sort of manifest destiny. He talked about China “offering a new choice for humanity” and that China must be prepared for “abrupt changes” in the international situation and be ready to weather “high winds and dangerous storms.” As we argued in Challenging China¸ in speeches over the past two years and in various articles, including in this space, China aims to be the dominant power and transform the post World War II/Cold War liberal international order into one that makes the world safe for authoritarianism. Last week saw the U.S. take a major step to confront China on the semiconductor front and others, including people who should know better, castigating the liberal international order. Next week we analyze the former and defend the latter. 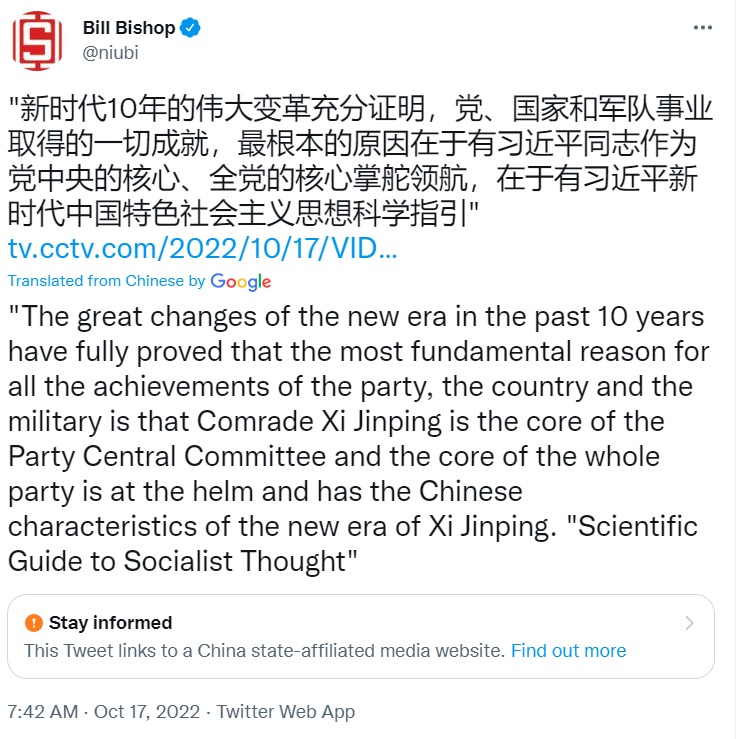