Japan in Africa, Biggest Countries GDP Growth and Diversifying and Decoupling from China

Many moral judgement calls are difficult. This one isn’t. A friend texted us about what we would do with Aaron Judge’s (no name-pun intended) 62nd home run ball if we caught it. The implication was the guy who did catch it—Corey Youmans– had a hard decision to make. Corey had been offered $2 million by a memorabilia auction company for the ball. Lots of people felt the moral thing to do was for Youmans to give the ball to Judge. Or, at least many thought it was a hard moral decision to make, a real Solomon head scratcher. We don’t find it difficult at all. It’s an easy decision morally. Selling the ball to the company for $2 million is the altruistic decision. If Youmans gives the ball to Judge it will sit on a trophy shelf somewhere for many years, perhaps make it to the Baseball Hall of Fame someday. Nothing wrong with that. But if Youmans sells the ball for $2 million—even if he is as greedy as Gordon Gekko–presumably he would give at least some of his earnings to charity if for no other reason than tax purposes. And the portion of the $2 million he spends on himself will help people earning wages at the companies where he spends the money.

His investments and savings will also help people working at banks, receiving loans, doing research and development and all the other ways the capital is deployed. Or maybe he’s a Mother Theresa type and gives all $2 million to charity–minus what he has to pay in taxes. Oh and that tax money helps to pay for services that help people as well. In fact, instead of turning that ball into productive capital, probably the least moral, least altruistic action Youmans could take would be to give the ball to Judge and let the ball grow dusty with age. And we give a productive take on Japan’s efforts in Africa, examine which large countries did best economically and reveal diversification and decoupling out of China. It’s this week’s International Need to Know, living the dream of playoff baseball and waking up to the nightmare of the postseason, all while keeping tabs of our never sleeping world.

Our nephew, Uriah Marcellus, is a very talented artist as you can see from one of his works below. He has a new website which you should check out. Support the artists of the world, especially the talented, kind ones like Uriah! 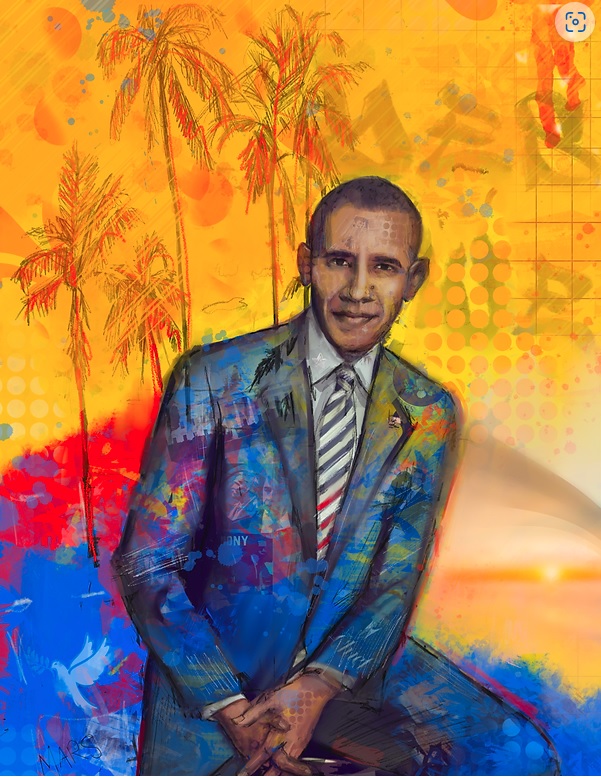 China’s efforts in Africa receive lots of attention and the U.S.’s perceived non-efforts are often decried. But Japan, whose development efforts around the globe are too often ignored, doesn’t get enough attention for its efforts in Africa either. Japan is one of the top country donors in the world and has pledged to increase aid to Africa. Over the summer, it pledged to provide US$30 billion to Africa over the next three years. Japan tries to distinguish itself from China in Africa. Celine Pajon, an analyst at a French think tank, says, “Tokyo applies international standards on infrastructure financing, it supports good governance and democratic principles…Japan also focused on investing in human resources by providing training to African countries instead of exporting its workers like China does.” But it’s not just Japanese government aid that helps African nations, Japanese companies are often investing in Africa, including Daikin Industries announcing it will be assembling air conditioners in Nigeria. According to Reuters, “In East African countries, including Tanzania and Kenya, Daikin is aiming to become the leading seller of air conditioners, chillers and other cooling equipment by 2025.” As Southeast Asia becomes saturated, and as African markets become more viable (with the only young demographics left in the world), we expect more and more companies will set up shop there. 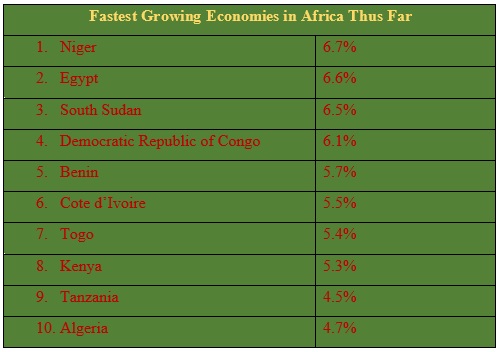 The Biggest and the Brightest

We got to thinking after reading an inaccurate Tweet that Ghana’s economy grew faster than China’s the last twenty years (even if we adjust for China lying about its GDP growth, its economy still grew faster than Ghana’s*). We wondered of the ten largest countries in the world, which ones had the best economic growth over the last two decades? Well, China, of course (again, remember that China exaggerates its GDP data). As you can see below, India comes in second (there have been accusations they have overstated their GDP growth too–are government economists like top chess players?), followed by Bangladesh, Nigeria and Indonesia. The U.S. comes in second to last among the ten most populous countries but most of these other countries are developing markets who should have higher GDP growth than a fully developed country. That’s what makes Mexico so disappointing, which has the lowest average GDP growth over the last twenty years of any of the ten most populous countries. Mexico had a good run in the two thousand teens but has really squandered its advantages, including that of being next door to a large, successful market. Perhaps that neighbor shares some of the blame. We list a few other countries not among the top ten most populous for comparison’s sake. Notice the U.S. performed better than Germany and Japan, two of their developed country peers. Will China’s growth look more like Japan’s or more like Ghana’s going forward? We predict the former. Come back in five years and we bet China is near the bottom of the top ten most populous countries (though maybe not according to their official data). 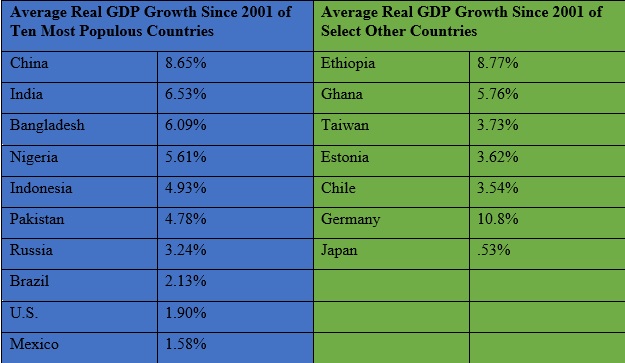 We diagnosed that globalization is alive and well a few weeks ago. What has been happening is a diversification out of China which is changing the nature of globalization. Many have proposed that the U.S., and other liberalized countries, should decouple from China. Until recently, there has not been much sign of that. But, there have been increasing signs of diversification. For example, Caroline Freund, the Dean of the School of Global Policy and Strategy at UC San Diego points out that China’s share of U.S. imports has fallen from 22 percent to 17 percent and that this is not due to either re-shoring or near-shoring: “U.S. import value grew 21 percent from 2017-2021…[the] rest of Asia absorbed the drop, with Asia’s share of US imports flat at ~45%.” We’ve been trying to navigate the impossible Eurostat website seeking similar numbers for Europe but so far we’re like the Ever Given in the Suez Canal of that wretchedly constructed website. Steps to diversify have increased even in the last few months with announcements from Apple and other companies that they are moving manufacturing to India and Vietnam. And, the U.S. is seeking to decouple in strategic areas such as semiconductors. Meanwhile, even Germany is seeking to diversify out of China as Olaf Sholz made clear in a speech this week. Not to mention EU foreign policy official Josep Borrell Fontelles stated in a speech referencing Russia and China, “…we have decoupled the sources of our prosperity from the sources of our security.” Decoupling is afoot. Diversification is at a full gallop 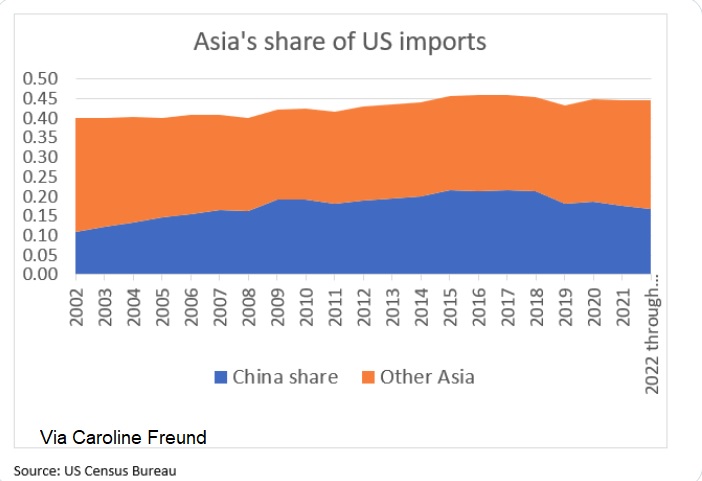 Vietnam with Chinese Characteristics, Democracy > Autocracy, and China’s... Bullets Not Bullets, Electricity and Wind are Winning and China’s Closing...
Scroll to top