When last we left you, we were about to fly to Japan for vacation and work. We cancelled our trip if not at the last minute, than certainly at the last hours. We cancelled not so much because we feared there was a greater chance to contract the conornavirus in Japan, but because just before we left, Japan essentially closed everything down. There would have been nothing for us to do over there but sit in our hotel room. In fact, as we were cancelling, we told the INTN spouse that likely by the end of our vacation it would be more dangerous here than there. Of course, by here we meant the U.S. not the Seattle area specifically which within days of our cancelling our Japan trip became the American epicenter of the Covid-19 epidemic. But our home town is one of the most internationally tied in the country so it should not be surprising that SARS-CoV2 has gripped its infectious tentacles here.One of the more amusing, astonishing, depressing behaviors we see from a minority of people is that they are not at risk from the virus so they will continue on in their lives doing what they want when they want. We presume they have parents or grandparents. Maybe they hate them or are expecting a big inheritance they want sooner than later. Or maybe they are just idiots. Whatever the answer, we raise the fog of corona, point to which country we all could learn from and warn about consequences of quarantining. It’s a special coronavirus edition of International Need to Know, coughing ahem at bad pandemic takes wherever we find them.

Since we wrote the above, Seattle has cancelled all events of 250 or more people, the U.S. has banned all flights from Europe,Tom Hanks(!) has been diagnosed with corona, people are using Tinder (!!) to communicate with people in Wuhan about the epidemic, and the NBA postponed a game just before tip-off when moments earlier one of the players tested positive for coronavirus. The world has officially entered the Tyson Zone when events are so insane there’s literally nothing that could happen that would shock or surprise us at this point. On a more serious point, the President of the United States started his speech Wednesday night by insulting Europe, EU countries refused Italy’s desperate pleas for medical equipment and China has threatened to cut off medical supplies to the U.S. if it doesn’t back off against Huawei. The world is quickly reverting to a pre-World War I order–that is, there is no cooperation at all, it’s every country for itself. This ultimately is a bigger concern than the virus. Unless the U.S., EU, China and the rest of the world start working together, using whatever is left of the liberalized post cold war order Trump and Xi are destroying, 50 years of amazing progress in improving human lives will go down the drain. Definitely worry about the Covid-19 virus pandemic and take all necessary precautions, but don’t take your eye off the ball–a rotating orb hurtling through space.

Now without further ado, here’s what you need to know.

The Fog of Corona

Inevitably in an age of instantaneous communications, people are making broad assumptions and assertions about SARS-CoV2 corona (screw it, corona is much easier to type). Regular readers of INTN will remember we were early on the coronavirus beat, bringing it to our readers’ attention on January 9th. By early February, in both work interactions with logistics and manufacturing companies, and in our reading of a variety of Chinese experts, it became clear to us this is the most impactful economic event since the 2008 financial crisis. In fact, it is likely to change supply chains more than any event since September 11th with consequences that are difficult to entirely understand. Today that is becoming a common place belief. Meanwhile, people rightly condemning China’s inept actions at the beginning of the outbreak in Wuhan, when officials were more concerned about controlling information than the virus, are now praising China as a model for how to deal with the virus. In fact, too many analysts are making the jump to asserting authoritarian governments are a better way of governing. This is childish thinking. During such a crisis, or course there needs to be intrusive state interventions. Even in robust democracies the laws are written to provide powers to governments not granted during ordinary times, thus Washington’s government banning gatherings of 250 or more people. Praise for authoritarianism is making the rounds partly because China’s government is selling the line that the world needs to learn from their successfull taming of the epidemic. As a part of this propaganda campaign, China is promoting the idea that the virus did not start in China, and may have originally started in the U.S. There are many things the world does not understand about the virus itself and the most effective public policy reactions to it. In fact, we are willing to wager that much of what we think we know will turn out to be wrong in the light of longitudinal studies and time. But unless we think we are in a permanent state of pandemic, then we do know the answer to which system is better: authoritarianism or liberal democracy. 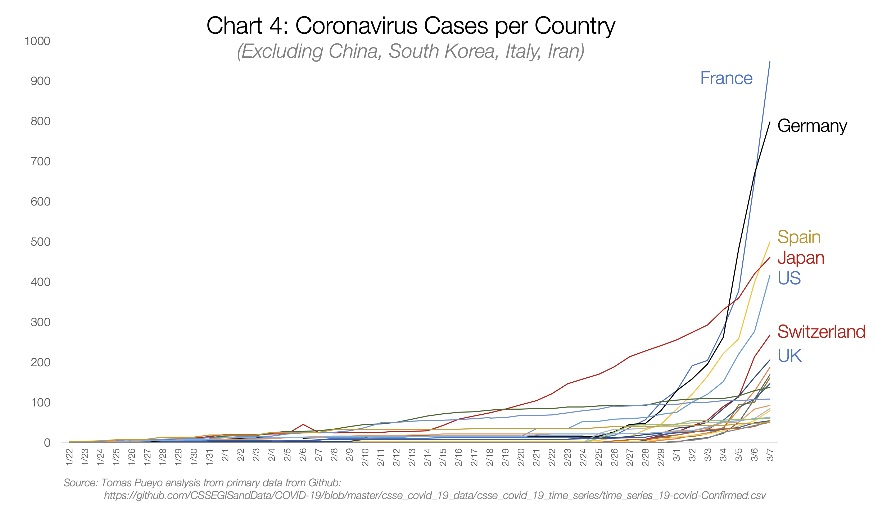 PS There has been some heroic work by medical workers in China. They should be lauded, whatever worries we have about the government there

Look to the Other China on how to deal with Corona

There has been much concern expressed about governments responses to the coronavirus. That is true here in Seattle about the U.S. federal government, but it was especially true of the people of Wuhan about their local, provincial and federal government. (check out this video of their citizens shouting “shame, shame” at a CCP official). But some countries have so far been more successful than others in containing the virus. South Korea, of course. But the “other China”, Taiwan, also stands out. So far, despite being only 81 miles off the coast of mainland China, having 850,000 citizens who live in China and another 404,000 who work there, Taiwan currently has only 30 confirmed cases of Covid-19. Back in 2003, Taiwan was hit hard by SARS—but they learned from it. They set up a National Health Command Center in 2004 “that focuses on large-outbreak response and acts as the operational command point for direct communications among central, regional, and local authorities.” With Covid-19 they have established a checklist of 124 actions, including “border control from the air and sea, case identification (using new data and technology), quarantine of suspicious cases, proactive case finding, resource allocation (assessing and managing capacity), reassurance and education of the public while fighting misinformation, negotiation with other countries and regions, formulation of policies toward schools and childcare, and relief to businesses.” Other countries have much to learn from Taiwan. Here’s an excellent primer on how they have reacted to this pandemic.

Surge in Domestic Violence in China Due to Corona

As American officials consider whether to strengthen social distancing policies, it would be wise to at the same time strengthen domestic violence infrastructure. Because one of the many trade-offs of mandatory quarantining that we’re learning from the China experience is that domestic violence will increase when people are holed up in their homes for weeks at a time. A recent article in the invaluable Sixth Tone notes that “While millions of people are spending time indoors, rights activists say there have been increasing instances of domestic violence — a crime in China since a landmark anti-domestic violence law went into effect in March 2016.” The virus, it turns out, is as damaging on the psyche as the lungs, or at least public policy response to it can be. “Wan Fei, a retired police officer who is now the founder of an anti-domestic violence nonprofit in Jingzhou, a city in the central Hubei province, told Sixth Tone that reports of domestic violence have nearly doubled since cities were put under lock down.” This is not to say a lock down of a city is inappropriate (in fact we think we need to go further than we have–“wash your hands and avoid people” for the time being), but mitigating measures on a whole host of issues—economic, social and criminal—must also happen. Good times 2020.

No Excuse for Not Liberalizing, Cancer Deaths Decreasing, and Mecca Rapper is... The Trump/Xi Axis of Evil Stupidity, China Propoganda Machine, and the World...
Scroll to top