In the era of continual accusations of fake news, sometimes we wonder if we understand what is really news at all, at least in America. Last week, when newscasters were literally breathless about impeachment proceedings (I was worried Mara Liasson might actually be having coronary problems), we read about Google’s apparent breakthrough in Quantum computing. As important as impeachment is, we wonder 100 years from now what has more ramifications for human kind? In fact, we speculate, as others have, that history focuses too much on political figures and not nearly enough on inventors, business people and even certain cultural personalities. Was not Steve Jobs more important than Bill Clinton? Tarana Burke more than Mike Pompeo? Jawed Karim more than Barack Obama?8 But our news media is fixated on politics. Impeachment is, as our spouse noted, the Super Bowl for journalists. But that begs the question of whether our journalists are playing the right sport (we’re an NBA and MLB fan ourselves). Perhaps the problem is most journalists in America are located in Washington, D.C. and New York and believe they are at the physical center of what is important. They are not. We need a national newspaper headquartered in Oakland, a radio show in Seattle, TV news in Atlanta…oh, wait a minute. We need to think this through some more and will next week during a trip to Italy. But before we leave, and as China celebrates the 70th anniversary of the founding of the People’s Republic of China—not quite old enough to qualify as a U.S. Presidential candidate—we focus on the Middle Kingdom: the yin and yangs of its economy, the recalibration of the world to China’s new assertiveness and China’s continued repressive policies. It’s this week’s International Need to Know, the Three Body problem of international information and data.

*I’ll bet most of you don’t know who two of these three non-politicians are? QED

As noted above, next week we’ll be sipping Montepulciano while gazing on the ruins of Pompeii and the splendor of the Vatican. INTN will make its drammatico return on Thursday, October 17th.

We Want a Good Economy

For forty years, China has been an economic marvel, achieving high levels of economic growth and not coincidentally pulling hundreds of millions of women, men and children out of abject poverty, something of which they should be proud and that is worth celebrating. But its economy has slowed and in recent months wearisomely so. This is not due to the U.S. – China trade war, or at least not mostly. China’s imports have slowed considerably but that is not the case for the U.S., which means China’s slow down is more than just a trade war problem. Something is happening with China’s economy in particular. As we’ve noted before, for demographic reasons, China will no longer experience rapid GDP growth. This is challenging because China may grow gray before it becomes rich. Remember that China’s per capita GDP is still below the world average. Yes, there are millions of successful households in Shanghai, Beijing, Shenzhen and other Chinese cities, but China is a country of 1.3 billion with hundreds of millions of Chinese still not sharing in prosperity. And, there are other worrying signs. China’s real estate development market will likely continue to be a positive driver for the economy but even here there are concerns with Alicia Garcia Herrero noting, “…the leverage of Chinese developers is almost four times higher than global peers, and this gap continues to widen.” Meanwhile, both household and corporate debt have risen significantly. To counter the economic slow down, China will presumably insert both fiscal credit and monetary easing into the economy, but increasingly China has to inject more Yuan to achieve more GDP. China continues to be a marvel of innovation and economic dynamism, but it is hitting headwinds. I know some people view the Chinese and U.S. economies as in competition and some in America root for China to lose. But remember that the world economy is a bakery, not a pie with a finite number of pieces. The more bakers, the more treats–if China loses, the world economy loses. 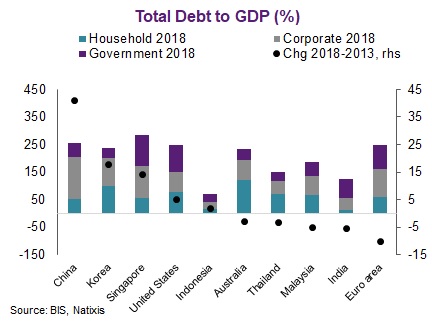 All the World’s a Stage…With Lots of Hams

China has become more powerful economically and militarily. The U.S., under the current administration, is not as interested in exercising world leadership. This has made China more assertive on the world stage but other actors want their own lines, taking lessons from Stanislavski. Japan, for example, Brando-style, in its annual defense review now lists China as a bigger threat than North Korea. At the same time, the EU and Japan signed an infrastructure development deal designed in part to combat China’s Belt and Road Initiative. At the signing ceremony, Japan’s Prime Minister Shinzo Abe said, “Whether it be a single road or a single port, when the EU and Japan undertake something, we are able to build sustainable, rules-based connectivity from the Indo-Pacific to the Western Balkans and Africa.” The rest of the world is not content to just let China act like a bull in a China shop (China in a bull shop?) imposing its own plans of how the world should be ordered. Meanwhile, there is beginning to be push back on its Belt and Road initiative from Pakistan, once an ardent supporter. Farooq Tirmizi opines, “because the China Pakistan Economic Corridor is not an investment into Pakistan, it is structured as a resource extraction exercise.” It is easy to be an economic upstart without global ambitions. But once one strides onto the world stage, matters become ever more complicated. As people have noted, it’s easy to be a manager except for the people, or in this case countries. 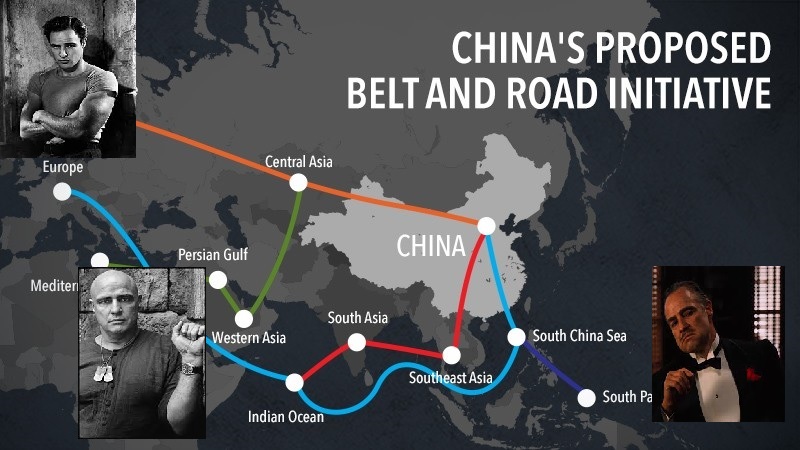 Acting Good Is Not Bad

And finally, despite China’s remarkable 40-year run of revitalizing their economy and bringing hundreds of millions of people out of poverty, the country remains ruled by an authoritarian government, one which in recent years is embracing its inner Darth Vader. China’s heavy hand of oppression has been noted in Xinjiang, it looms over the freedom protests in Hong Kong and it is an ever gathering shadow over Taiwan. It also has the potential to kill the golden goose. The Asian Swine Flu which some estimate has killed up to 50 percent of pigs in China has spread so wide and deep in part because of lack of transparency in China. A few weeks ago it was reported that in Hangzhou, a major center of China’s tech world, and where Alibaba is headquartered, that the local government is sending representatives into the top 100 companies to “coordinate policy and investigate problems.” And increasingly China is exporting its surveillance technology to other less than savory regimes and interfering in other countries such as Sweden. Can China continue its economic success if it does not reform politically? This is one of the four most important questions in the world today. 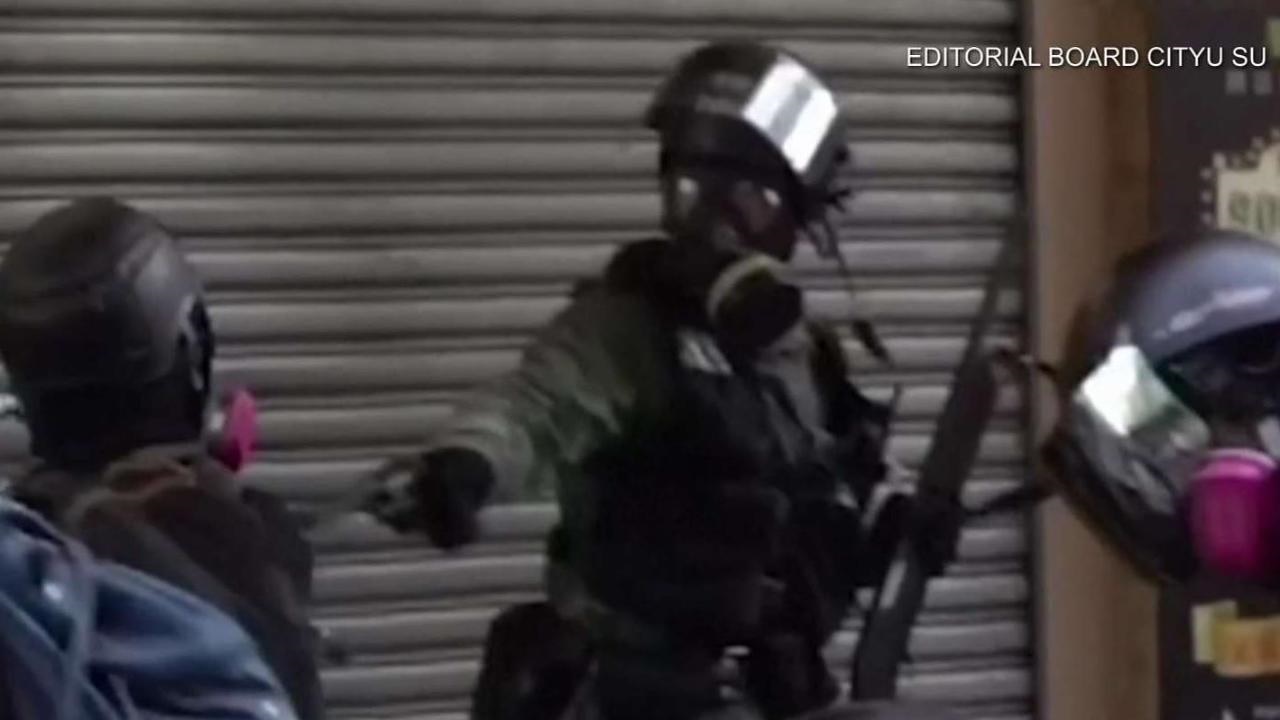 Good Time to Be Under Five, Polluted Minds & Polluted Skies, and Pokemon... Italy and Vietnam’s Futures, Ents to the Rescue and Dying Indian Coal
Scroll to top