The Last Dance is over and sports fans are desperate. Is college football coming back? Will the coliseum be activated with the lions salivating, the crowds roaring in front of their televisions, iPads and smartphones? Will Maximus Decimus Meridius, class of AD 180, collide with his fellow collegiate slaves this fall? We discussed whether college football will reopen with an old friend (he’s actually a month younger than me, so quite young). We posited that college football of all sports might be the most difficult to restart this fall absent a medical miracle. After all, many campuses may remain virtual fall quarter—the California colleges have already announced they will be closed. Would we really expect “student”-athletes to be the only ones to gather on campus? Is it realistic for unpaid young people–slaves of the NCAA and their member schools–to play a contact sport in which dozens of men are grunting and breathing on each other in close quarters, even as engineering students, business majors and literature freaks connect only online? Of course! Or, at least my friend convinced me that the SEC, where football is homecoming king and queen, will do everything possible to play this fall. The south and Texas may indeed resume football in September, but will the rest of the country? Our friend envisioned the SEC playing as usual but other parts of the country, including the west, waiting until January. All we want is not to go on our annual Seattle Mariner Temper Tantrum—this time not over another anguished loss during the regular season but over the entire rebuild of the team being ruined by the pandemic. As the tantrum brews, we tackle what’s happening in South Asia, throw a pass to Solar’s ascent and try to block odor recognition technology. It’s this week’s International Need to Know, passing and kicking, but never punting on important international information and data.

We Need to Talk About South Asia

We picture an epidemiologist sitting alone muttering to herself in the ratty booth of the last dark dive bar open in her city as she gazes into the glow of her tablet at the heterogeneous pandemic data around the world. When she gazes at South Asia, she downs the rest of the bottle of her cheap whiskey, breaks the flask of Hydroxychloroquine in her lap and uses the jagged glass to challenge the bartender to a fight. Everyone was worried that places like India, Pakistan and Sri Lanka, with overcrowded housing, overwhelming poverty and primitive health care infrastructure, would be devastated by Covid-19 when it reached their lands. Thus far (the two most important words of the pandemic), this has not been the case. Death per million people rates in South Asian countries are far, far lower than in Europe and the U.S., as you can see in the graph below. South Asia also fares much better using CFR–the percentage of deaths among confirmed corona-virus patients. Al Jazeera reports, “France, 15.2 percent; the United Kingdom, 14.4 percent; Italy, 14 percent; Spain, 11.9 percent and the United States, 6 percent…By contrast, in South Asian countries, those rates have been far lower. India has a CFR of 3.3 percent, Pakistan 2.2 percent, Bangladesh 1.5 percent and Sri Lanka 1 percent.” Why is this the case? Nobody knows for sure. Perhaps these countries are under reporting deaths, perhaps it has not spread far enough into the populations yet. Or, maybe, it is due to their younger populations. Or more speculatively, perhaps it is due to more exposure to other chronic infections. Grab your bottle of choice and await more data and research. 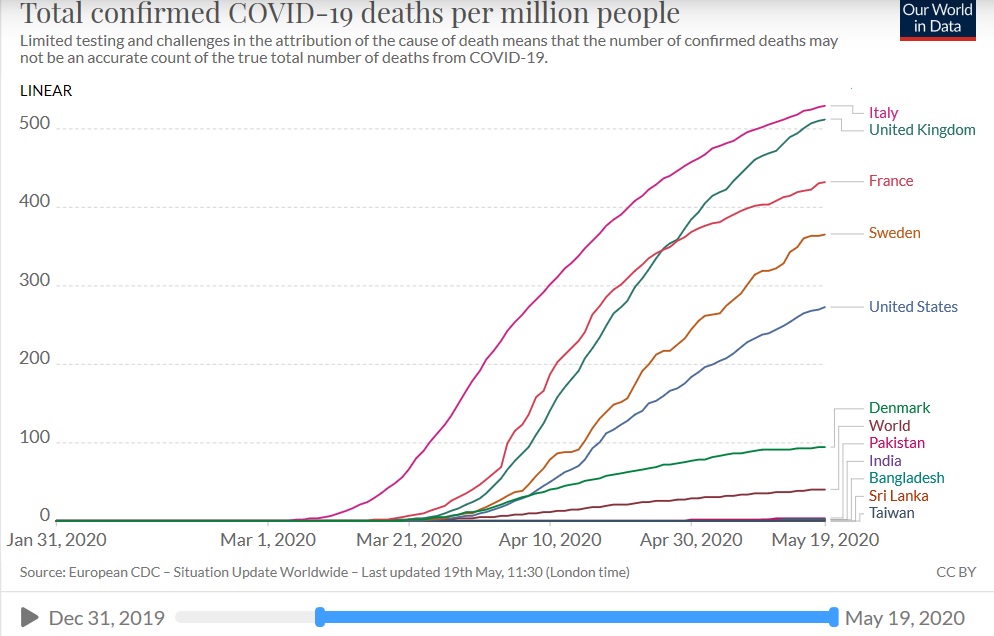 The Ascent of Solar

With the Covid-19 pandemic, Murder Hornets and the emergence of a four-foot ravenous lizard in Georgia (shouldn’t it be terrorizing Tokyo?), it’s easy to assume the world is going to hell in a hand basket. But lost amidst the terrorizing noise, is an abundance of good news, including the continued ascent of solar. One of the first articles we wrote in this space was a prediction that solar power prominence may come sooner than expected. Seattle area clean energy investor Ramez Naam recently published an update of his analysis on the future of solar power, which he has been writing for ten years. He notes his previous forecasts have all been too pessimistic on the rate of decline of solar power costs. As you see in his chart below, “solar costs dropped by a factor of 5 since 2010.” This is true globally, in China, India and in the U.S. There is no guarantee that costs will continue to drop at this rapid rate, and solar, as Naam himself points out, still needs continued advances in storage (although there are great strides being made there too). But the world is well on its way to replacing dirty energy such as coal with solar (last week came news that more energy was generated in the U.S. by renewables than coal). CO2 emissions are down but the pandemic won’t save us from climate change, technology will. We hope Greta and the New Amish* will recognize this in their efforts to fight against climate change. Yes, times are irrefutably tough right now, but there are also important improvements being made. Don’t forget them while you’re hunkered down against the pandemic. 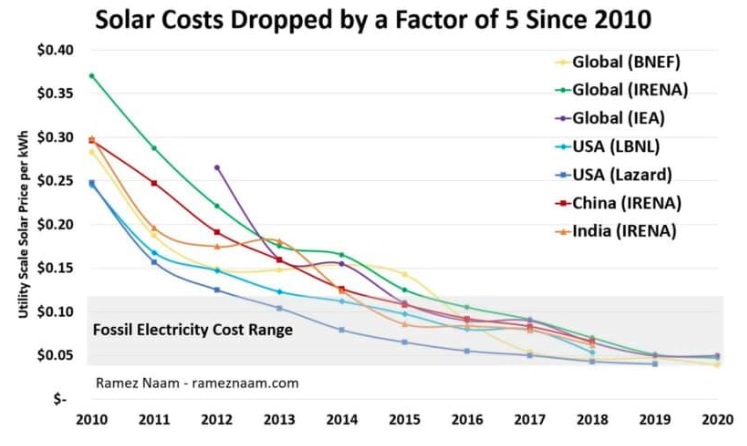 *Too many people fighting to prevent climate change believe in degrowth—purposely stopping economic growth. It won’t work, is unfair to impoverished nations, and is an Amish-like mentality. But, Greta and the New Amish is a great name for a band.

“I Know Her By Her Gait” 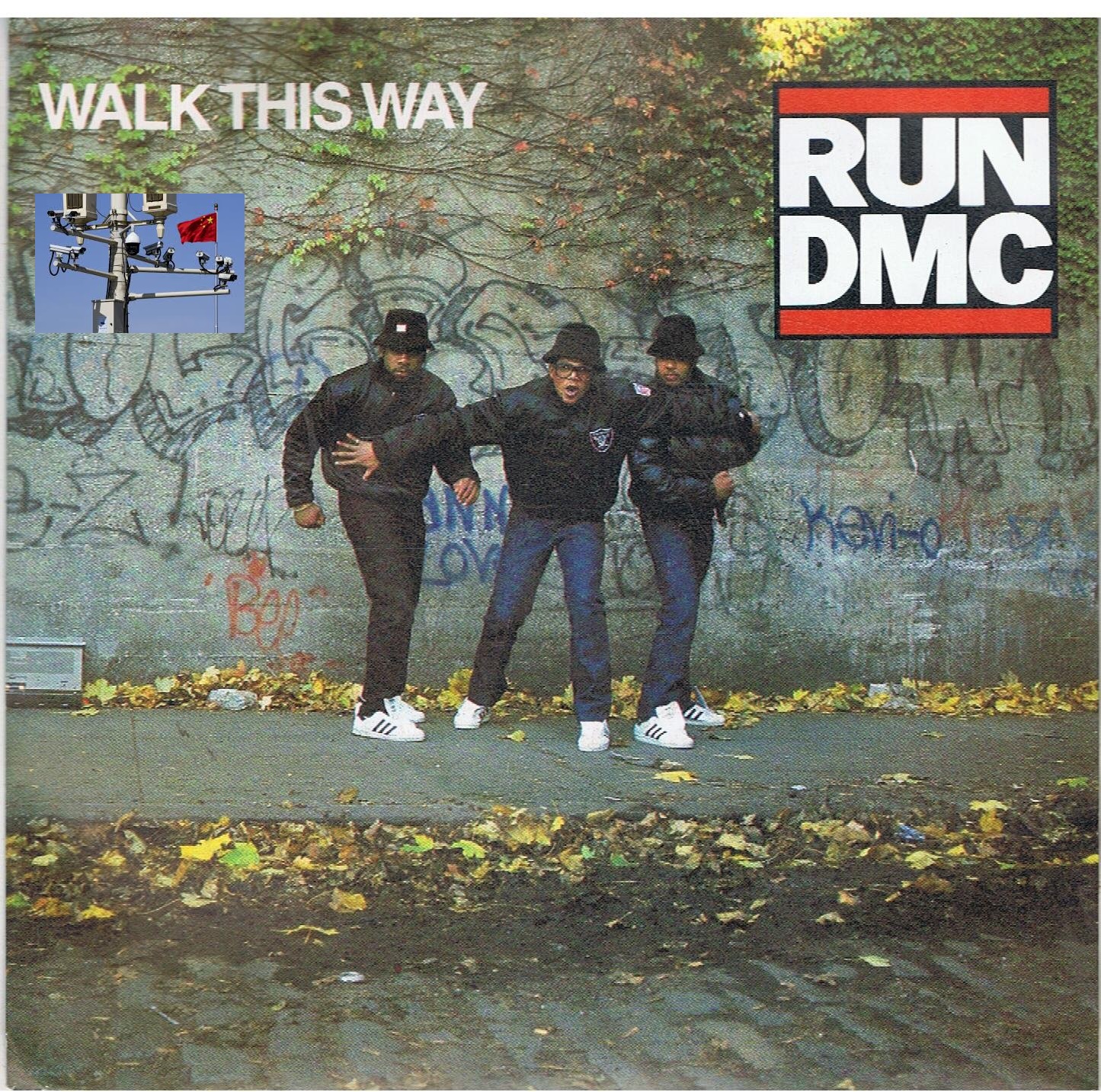 Globalization to the Rescue, India Takes from China, & We Need to Talk... China is Expansionist, India-China Border and Ghana’s Covid-19 Respon...
Scroll to top