A tree falls in the woods, a live electrical outlet is found in a wall and “China experts” speak silently on China State television. We will answer the big philosophical questions. Someone we know is having their main bathroom remodeled. They are in the demolition phase of the remodel and the room was stripped down to the studs. The contractor found a live electrical outlet and live exposed electrical wire inside the walls left there by whomever originally built this bathroom. Live outlets and exposed wires inside walls are, of course, not to code and a large fire hazard. If for no other reason than that, the person was glad they were doing the remodel.

We learned of this during a Zoom session. At one point during the Zoom meeting we read a message from an old college chum (if we are ever in a Zoom meeting with you rest assured you have our full attention). Our friend from our Willamette University days had sent us a link to a China State television show (CGTN’s The Heat) featuring a Willamette economics professor discussing the U.S.-China relationship. Upon watching the video we saw the econ professor and the other panelists, including the director of Brooking’s China Center, talk at length about the Trump administrations’ bad policies and how that soured the relationship. Left in the wall was any mention of over one million detained Uyghurs, the crackdown on Hong Kong or a myriad of other provocations and problematic actions by China’s government.

We are no Kant, Aristotle or Jean-Paul Sartre, but even we could hear the sound of branches crashing to the ground, ignored and unheard by American China experts opining on CGTN. With that in mind we climb the trunk of our earlier prediction for solar power hegemony, see our sprouts of Ethiopia human rights worries grow and take an axe to the balsa wood of China’s GDP data. It’s this week’s International Need to Know, wishing we were the “Hammerin Hank” of international information and data.

Many of you have asked when a Kindle version of our forthcoming book, Challenging China, can be pre-ordered. We are pleased to inform you it is now available. Of course, you can continue to pre-order the printed version as well, perhaps constructed from the pulp of the tree that fell in the woods.

Power to the Solar

One of the first stories we published in this newsletter way back in January 2016 was “A Moore’s Law of Solar Power?” We noted that Ray Kurzeil in 2009 discovered that solar generation was doubling every two years or so. We showed that was still the case in 2016. It continues to be the case today as you can see in the first chart below. Between 2016 and 2019, solar power generated more than doubled from 328 TW to 724 TW. We don’t have figures for 2020 yet but given the continued decrease in the price for solar power, we have no reason to believe there weren’t also significant increases in power generated by solar last year. The first chart below is on a logarithmic scale, meaning solar generation is increasing exponentially like Covid-19 infection rates when uncontrolled, but in this case it’s a good phenomenon. A funny thing about exponential growth is in the early years you don’t notice it because the entity is growing from such a small base. Look at the second chart below showing solar’s share of overall electricity production. Until around the mid-teens, one wouldn’t even notice solar at all. Even in 2016 when we wrote our first INTN story, it barely accounted for 1 percent of electricity generated. Now it’s nearly three percent and will undoubtedly continue to increase at a rapid pace. In fact, Ramez Naam shows that by 2030 or 2035 the cost of solar per kWh will be amazingly cheap. Not coincidentally, that’s when our January 2016 post predicted “basically all our energy needs could come from solar generation and storage.” And that means, as we wrote then, “This will have a profound impact on our economy, jobs, stock market and efforts to combat climate change.” We’re on the cusp of transformative times, and good ones, unlike what so many others fear and predict. 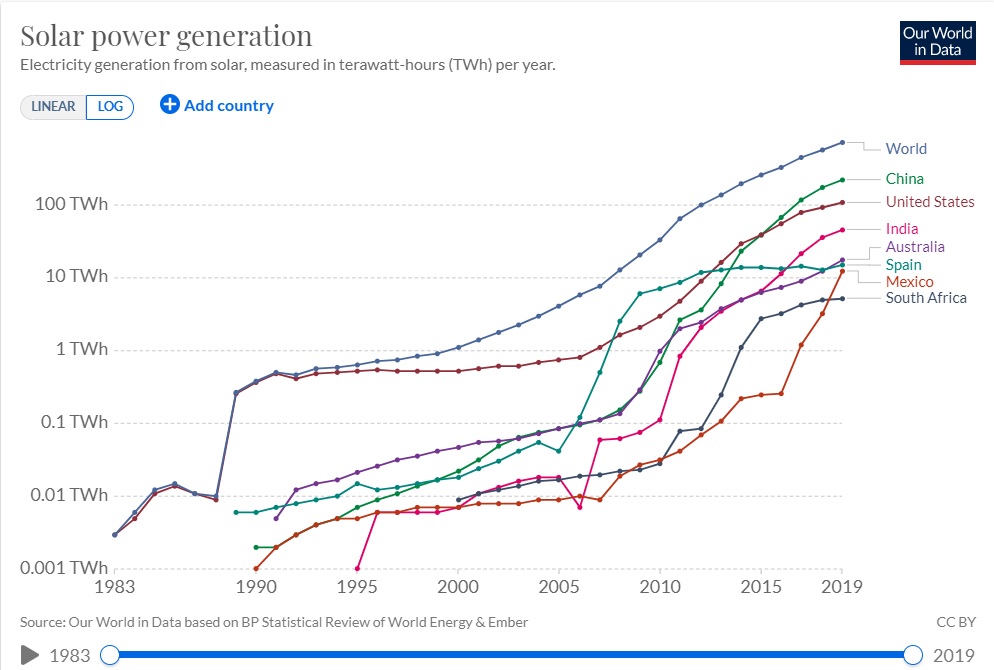 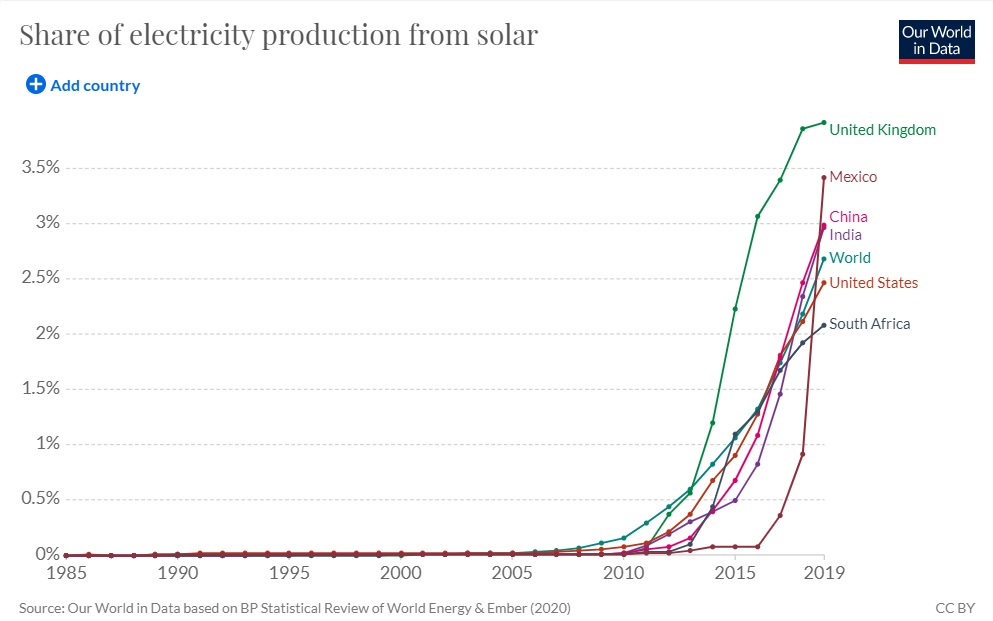 With so many events trembling the news these recent weeks it is easy to lose track of what is happening in Ethiopia. We reported a few weeks ago regarding the crackdown by the Ethiopian government in Tigray. Last week came worries of human rights abuses in refugee camps there. Reuters reports that the UN Agency on Refugees is worried Ethiopia is violating international law in two refugee camps in Tigray. “It said satellite imagery showed fires burning and fresh signs of destruction at the Shimelba and Hitsats camps for refugees from neighbouring Eritrea, who fled political persecution and compulsory military service before the conflict in Tigray.” Remember that the Prime Minister of Ethiopia Abiy Ahmed won the Nobel Peace Prize for settling the conflict with Eritrea. The Ethiopian government denies any violations in the refugee camps or in its continuing efforts in Tigray. But UN and other observers have been unable to gain access to the Tigray region so there is no way to verify government or other claims. In human experience, if one is denied access to an area, it almost always means there’s fire with the smoke.

Lies, damn lies and China’s official GDP data. We’ve referenced here in passing a few times, including a recent story about Covid-19 and the economy, that China’s economy is not growing as fast or doing as well as claimed. Perhaps we should explain why. China Beige book has done a good job of explaining that China has retroactively adjusted its fixed asset investment numbers down. This allows for China to claim additional investments in the current year and thus increased GDP growth. Now China’s economy likely did do better than most countries given it contained Covid-19 better than most (though Vietnam and Taiwan’s economies likely did better). But, there are also complicated factors to how China grew in 2020 as Michael Pettis explains. China claims to want to transform to internal growth driving its economy rather than exports. But consumer spending was down in 2020, even as the government artificially spruced the export spigot to keep GDP growth up. Certainly much of the consumer decrease was due to the Covid-19 lockdowns early in the year. But there’s lots of evidence of continued reduced income and unemployment post lockdowns. If China and the world are successful at vaccinating this year, China’s GDP will likely grow at a relatively high rate in 2021. But, as we argue in Challenging China, China’s era of high economic growth is over with all the attending consequences and ramifications. 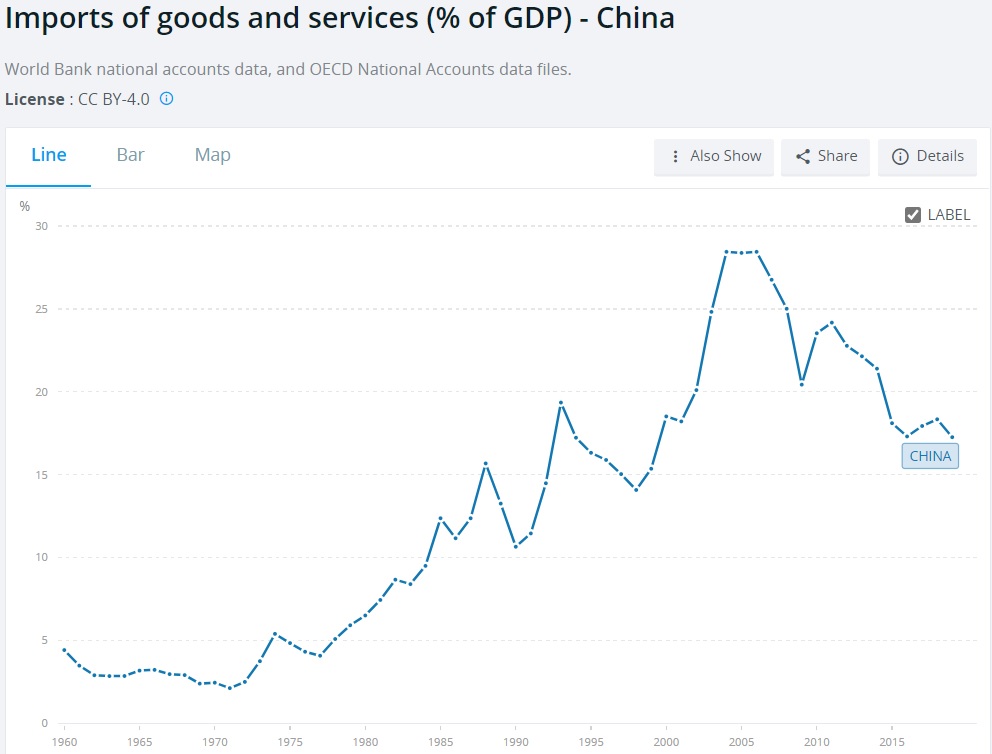