Maybe it was because the sun shimmering on my friends and I at Mission Beach in San Diego was fresh in our mind, but when we stumbled accidentally upon a U.S. Senator shoveling fertilizer during the Supreme Court nominee U.S. Senate confirmation hearings, our immediate thought was you can’t BS old friends. And that elected official could have used some right then. The last two years have been hard times for many all over the world, including in staying engaged with friends. But as the world reopens, for good, bad and otherwise, we flew to southern California for what was pre-pandemic an annual gathering of old college buddies. We don’t see most of them often, but when you’ve known people for decades (we started college at age 7), and have cavorted as we did, as collegians are prone to do, you have a common bond not severed by time.

Before that we recently saw two friends we’ve known since Kindergarten. There’s certainly no BS’ing folks you took naps with. We text often with some other friends, often about sports, but the subtext is not competition but love. Perhaps a fix to what ails our politics is for our elected officials to spend less time in the committee rooms and more with old friends from times past. The sun on Mission Beach will one day set on our lives, but through the ages friendships rise. We ask friendly questions about cryptocurrencies, remind ourselves why Tokyo is cheaper than New York and examine the trade-offs of China’s economic decisions. It’s this week’s International Need to Know, the Joe Cocker of international information and data.

We don’t pretend to understand cryptocurrency but perhaps one of our readers will be able to enlighten us. We don’t think this new financial technology is going away, not with $3 trillion worth of assets tied up in them. But we still don’t understand their use case. Their proponents often say they are needed because governments are so irresponsible in managing their affairs that eventually we will see massive inflation and only crypto will hold its value. Perhaps. But as inflation has risen around the world, higher in the U.S. than in most advanced economies, cryptocurrencies appear to be very volatile and not a stable storage place (see graphs below where bitcoin value decreased as inflation increased). Cryptocurrencies are needed some other people argue because you need to protect your money from governments. But are Russians able to utilize cryptocurrencies effectively with their economies sanctioned heavily by the free world? It doesn’t appear to be the case. And what of the Canadian trucker protesters? The Canadian government recently confiscated $1 million worth of bitcoin from them. So just how is cryptocurrency protecting them from the tyranny of government overreach, if you feel that is what the Canadian government is doing (we do, even while finding the protesters less than savory). So what purpose do cryptocurrencies serve? We do not know which is undoubtedly a function of our ignorance rather than a condemnation of the technology. So, please, dear readers, enlighten us. 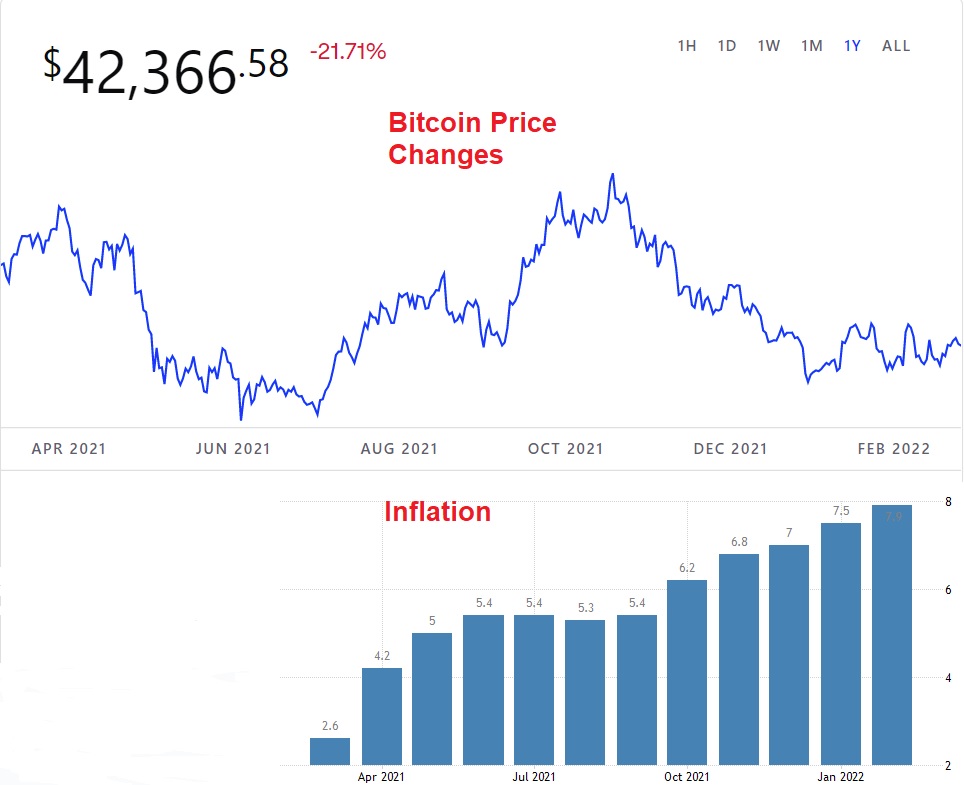 Build It, They Continue to Come

We stopped to get gas on the way home from the airport after a long weekend in San Diego with college friends. While manning the pump, a homeless woman came up to us asking for a ride to Northwest Hospital, which was a block north. She claimed she was in danger, pointing to a man at the pump across the way, asserting he had a gun and was going to shoot her. He appeared unarmed except for the gas pump in his hand and she was clearly not of sound mind. So we were not so pleased when she tried to get into our car. We closed the door and locked it with our key fob. The homeless populate contemporary Seattle like an impoverished Zombie spring break in Daytona Beach. But why are there so many homeless here and in many cities around the country? The largest, although not only, factor is the lack of affordable housing. And the biggest reason for this is we make it so difficult to build in our country. One of our college friends is a developer and he related all the trials and tribulations of building housing in his city. But don’t take his or our word for it, remember our tale of housing costs in Tokyo, New York and San Francisco a few years ago? A quick update. As @TheOmniZaddy points out, Tokyo’s population increased by 13.7 percent since 2000, in New York by 9.9% and in San Francisco by 11.1 percent. And yet, while housing costs skyrocketed in the latter two, they barely budged in Tokyo. That’s because Tokyo built far more housing. Japan’s zoning policies are very different than in the U.S., including less onerous building regulations and not differentiating between different types of residential building in zoning. An apartment, house and townhouse can all be on the same block. America’s bad regulatory regime, including for housing, is one of the three most important issues facing the country. Learn from Japan, America. 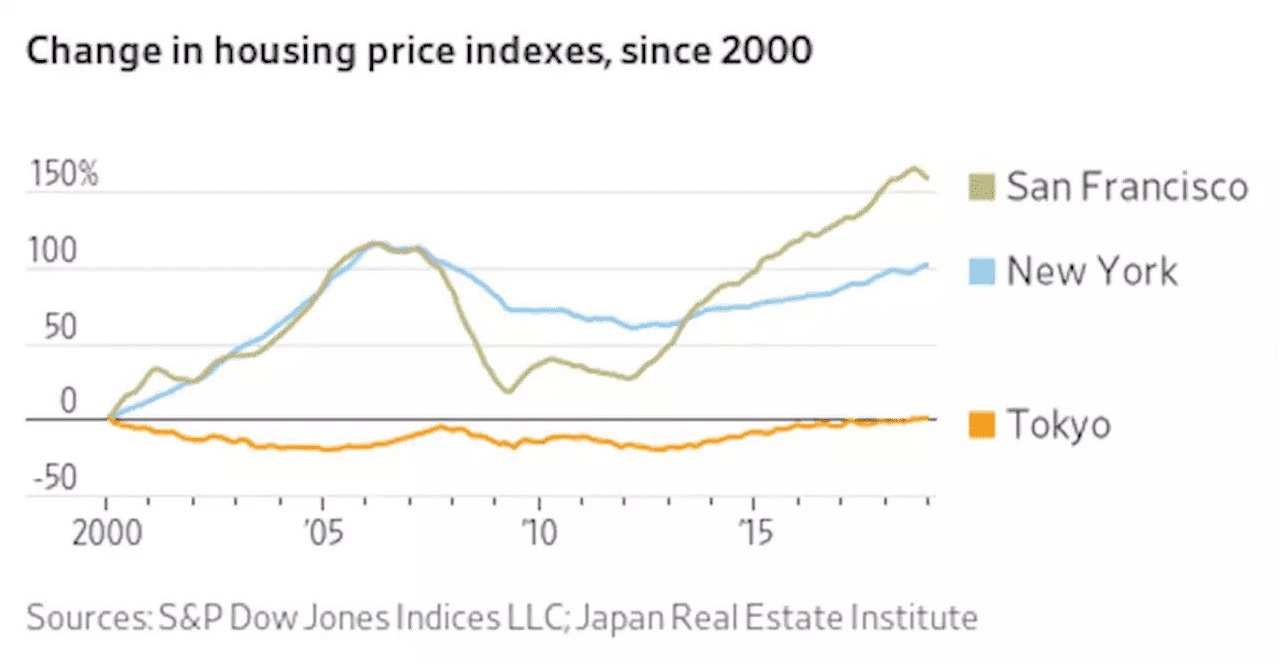 There are trade-offs, there are always trade-offs. But whenever examining an event we humans always take one side of the equation: it is either bad or good. Gray is the most hated color in the world even though it best describes it. Even the best of happenstance leads to some unforeseen trouble and even the worst of catastrophes contains the proverbial silver lining, even if it be a mere sliver. So we must keep that in mind when examining the inevitable twists and turns of China’s economy. And contort it has in recent weeks with some China observers atwitter (usually on Twitter) over stock market volatility in Chinese tech companies. Chinese tech stocks are way down from months ago and crashed last week only to make good recoveries afterwards. But stock markets, at least in the short term, are white collar gambling. More interesting are the announcements that large Chinese tech companies such as Alibaba and Tencent plan to decrease their payrolls by 20 percent or more. That is a sign of major damage in the industry and causes some critics to crow that Xi Jinping is wrecking his country’s economy due to the crackdown on consumer tech companies last year. But remember, as we reported, Xi wants to change the focus from bits companies (consumer tech) to atoms companies (industrial tech). Workers no longer in the employ of places like Tencent and Alibaba will need to work somewhere and presumably Xi and his controlling cabal hope they will fill the offices of industrial tech. But will they? Xi and his government can no more twist knobs so precisely on the economy than we can decipher what is happening. There are trade-offs, always trade-offs. 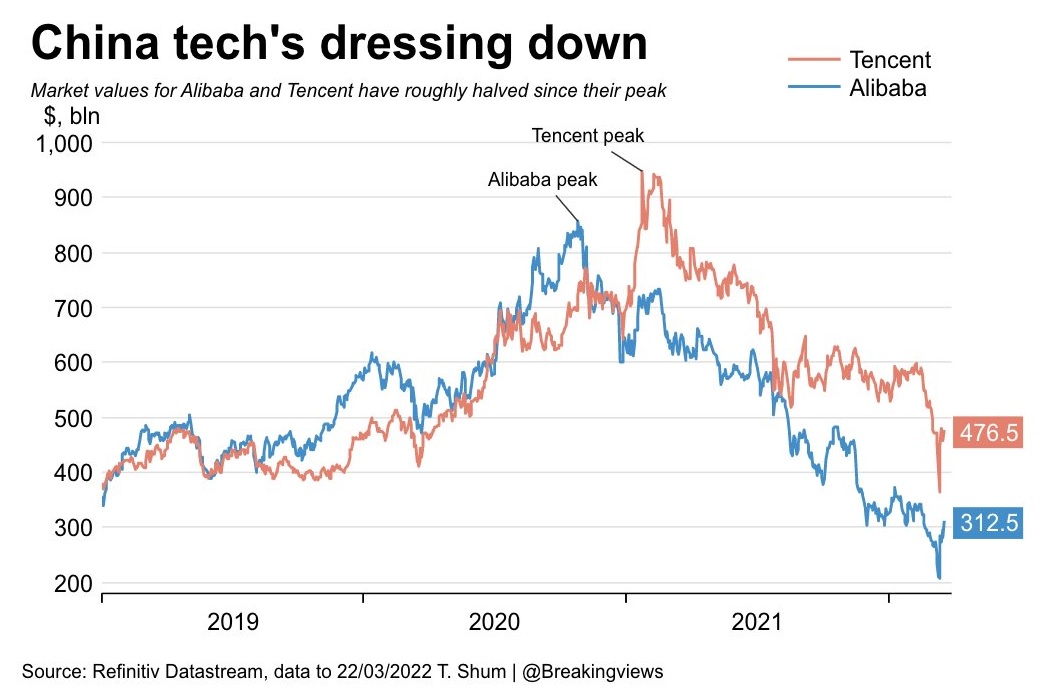 The State of Covid, Where the Wealthy Live and Asking the Wrong China Quest... Don’t Believe the Wheat Hype, Talking Turkey Religion and Painful Adjustments...
Scroll to top