Being a lazy Memorial Day Weekend, when we heard about the existence of a video of Janis Joplin and Tom Jones performing a duet, we quickly went and found it on that galactic free-for-all of useful information, learning opportunities, fun time-sucks, misinformation and cute kitten videos that we like to call the Internet. With two quick clicks we were soon watching the Welsh corn fest and the soon to be dead from a drug overdose pioneering woman rocker duet on Raise Your Hand—and it grooves and it rocks and the dancers in the background are alone worth the price of admission.

We are, of course, too young to have ever seen Janis Joplin perform but perhaps you will be surprised to learn we once saw Tom Jones. A decade ago we were invited to the gala celebrating the inauguration of the opening of Emirates Airlines direct route between Seattle and Dubai. The two things we remember about the gala are a) Tom Jones performing, and he was, to our surprise, a delight, perhaps a guilty one, and b) the CEO of a very large company acting like a jerk on the dance floor as he danced with his mistress. It was not that he was dancing with his mistress that made him a jerk, though we’re sure his family probably thought that was reason enough, but rather his dismissive attitude to others. Buy us enough beer and perhaps we’ll tell you the full story. So a lesson was learned. The cool and hip make fun of Tom Jones but he was quite fun and enjoyable. The business establishment respected this CEO but he was most certainly not respectable.

You draw your own lessons about what we should do about the cool, hip and business establishment. In the meantime, it’s not unusual for us to bring you stories of Japan now exporting weapons, worries about world hunger and China kind of sort of reopening. It’s this week’s International Need to Know, shooting up international information like Stephen Curry, defending international data like the Boston Celtics.

Read more in-depth analysis on our new Substack
Occasionally we are compelled to write a longer more in-depth analysis than the short articles you find here. We have decided to use Substack as the platform to do so. How often we write such pieces will be at the whim of our muse and the ability to catch words and ideas in the wind. Our first article explains what should be the goal of U.S. foreign policy with China. You can read it here. And if so desire, you can also subscribe at the link to read what we write in the future. The focus likely won’t always be on international issues; we may also tackle the smorgasbord of contradictions, problems and hope that is America. Or maybe we’ll do in-depth analysis of Tom Jones duets. It’s hard to predict.

The end of World War II is now 77 years ago, but it is true when looking into the rear view mirror of history, that events are closer than they appear. America is still reckoning with its past, including unfinished business from the Civil Rights Movement and even the Civil War. Germany has reluctantly armed Ukraine, in part because of its dark mid-20th century shadows. Until the past few years, Japan also shackled its foreign policy possibilities due to its mid-20th century past. But as China has become more authoritarian and expansionist, Japan has turned the key in its locks, including this week by announcing it is loosening its policy on selling weapons to other countries. Japan will sell fighter jets and other weapons to Thailand, Indonesia and Vietnam among other places. Indeed, Japan and Vietnam have forged a closer security relationship as we pointed out a few years ago. World War II was a long time ago—the Cold War too. But they still influence the world today even as we enter a new era. 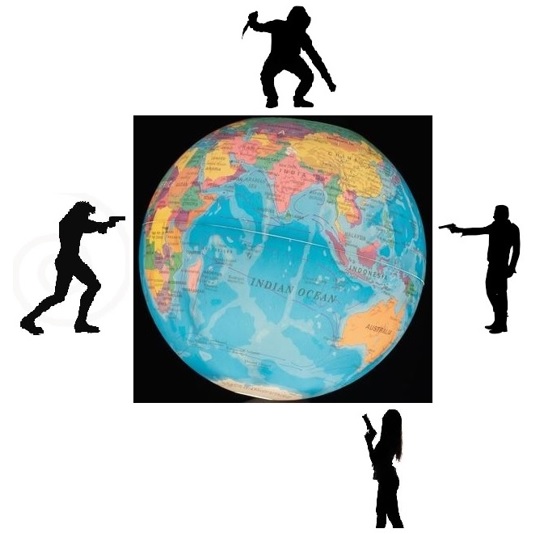 One needs to separate the wheat from the chaff in understanding what is happening in world hunger today what with the Russian invasion of Ukraine, inflation around the world and certain countries imposing food export controls. As we noted over a month ago, even though Ukraine is a large exporter of wheat, its overall wheat production is only a small portion of global wheat output so we’d hoped the hunger crisis worries were overblown. But, of course, there are crop inputs, such as fertilizer, that are also facing issues, including rapid increases in price. We still assert there there is enough wheat available that nobody should starve, but large increases in prices, could cause hunger problems whatever the overall availability of food. As you see in the second chart below, Indonesia is the largest importer of wheat, followed by Turkey, China and Egypt. Within this complicated equation it is important to understand that, as Our World in Data puts it, there has been a “global decoupling in agricultural land and food production.” We are growing more food with less acreage. That seems like good news for addressing the challenge of Ukraine’s forced reduction in wheat production. But again we must separate the information wheat from the data chaff. If you look closer you’ll see that this decoupling of land from food production is because we are using less land to raise livestock. We continue to increase the amount of land needed to raise more crops. However, we need more crops partly because more people are eating meat around the world so much of these crops being grown are for feeding livestock. All the pieces matter as Detective Lester Freamon said on The Wire, and they certainly do in understanding possible world hunger issues. 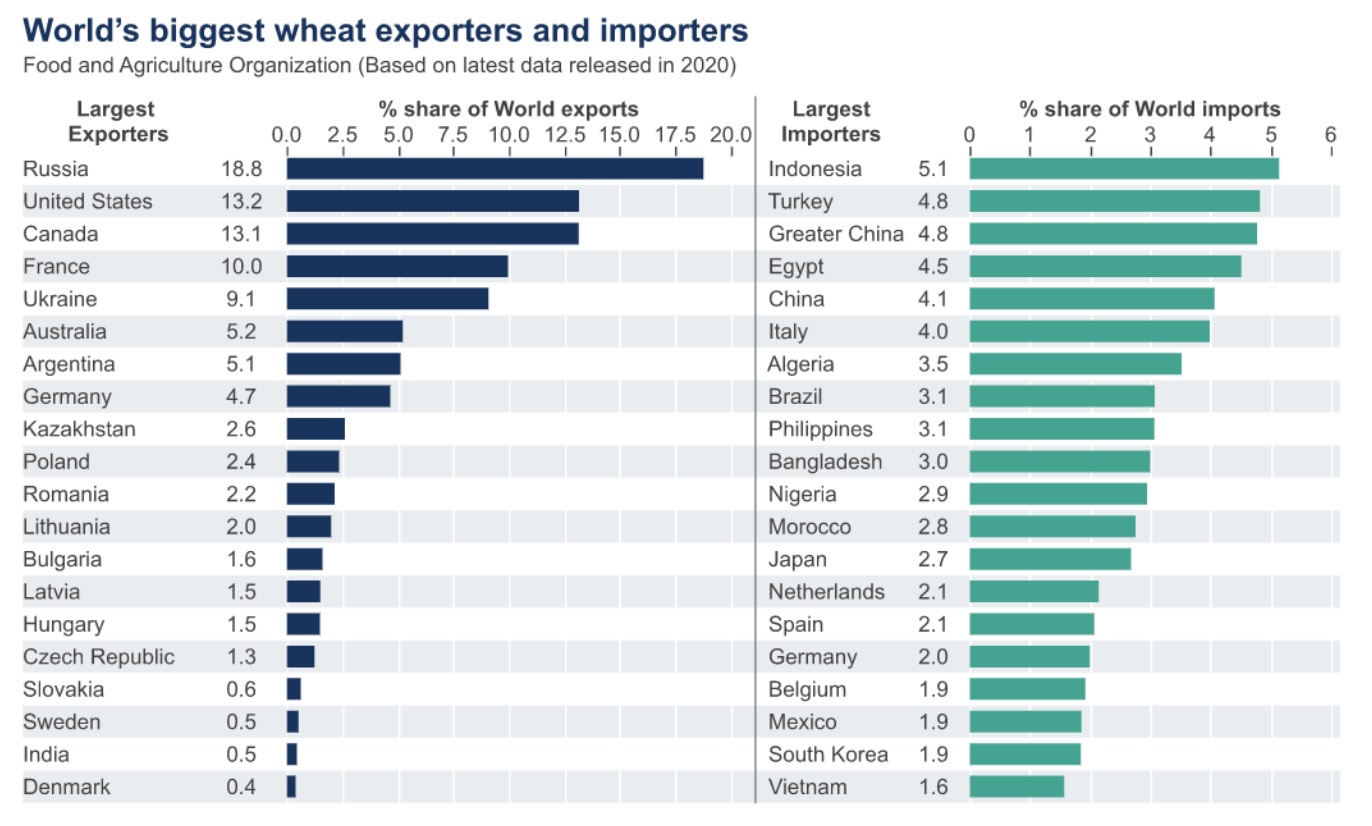 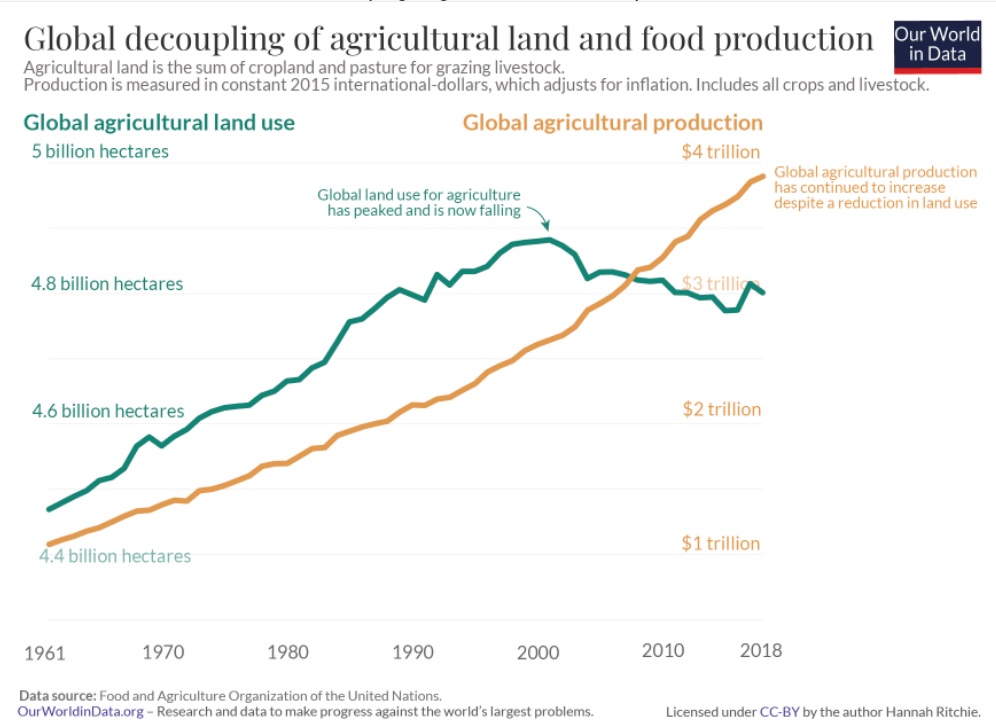 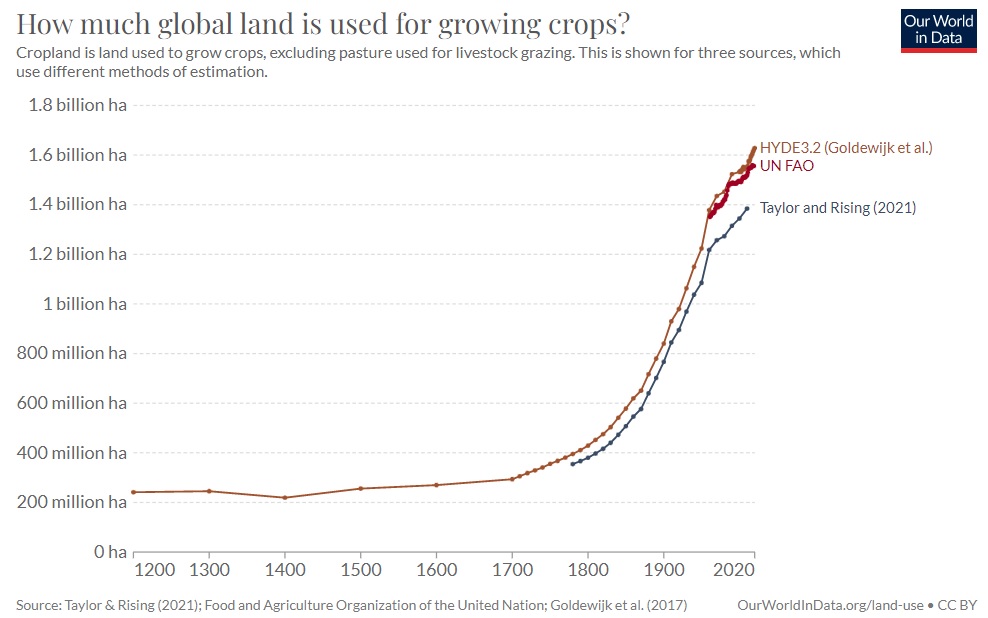 China appears to be reopening, including and especially Shanghai, as at least for now Omicron is no longer ravaging the city. China seems to have regained control of the virus…for the moment. That is good news for China’s economy and for global supply chains. But by saying China is opening up, we mean China is allowing people to leave their apartments, is re-starting public transit and is allowing restaurants and retail stores to reopen. But China continues to be a closed society in most other aspects, whether censorship of the Internet, preventing freedom of expression (including of the LGBTQ community, no matter what the UN’s human rights chief claims), and making it difficult for Chinese and capital to leave the country. China is claiming relatively good Purchasing Manager Index (PMI) numbers for May, as it tries to paint the economy as doing okay even in lockdown. Those numbers are as unlikely as our winning a dance competition but perhaps not as entertaining. How long China will remain open is something only the next Omicron variant knows. When China will reopen society in other ways, is something only the fates know.