Discrimination Around the World, the Middle Class and is China a Good Investment

One of the best ways you can appreciate your country, no matter which one, is to leave it. Even if only briefly as we did in traveling to Vietnam, a wonderful place in its own right. But we’re happy to be home watching our beloved Seattle Mariners baseball team attempt to seize defeat from the jaws of victory, bask in a summer’s warm extended reach into autumn and watch the hum and drum of the American cultural landscape. Ho Chi Minh City gave us the illusion of walking in New York City in the 1910s—energetic, creative, chaotic, a cacophony of sounds, smells and sights. We walked those streets with a group of students drawn from three colleges, from a wide variety of backgrounds, as part of a Follow the Supply Chain Study Abroad program we helped organize. Some were immigrants, undoubtedly appreciating their old and new countries in a multitude of ways, colored fresh by a visit to a third. If we had a magic wand to better America, it would transport all Americans, at least briefly, to other lands, so they could see how things can be done differently, sometimes better, sometimes worse.

Of course, America is a gumbo of all these other countries—their cultures and people—which is why we are so successful, and why it is good to be home…even as we anticipate our next trip to New Orleans, the ultimate gumbo of America, of the world. And as we savor that trip we take a bitter taste of discrimination around the world, stir up whose middle class does the best and walk the levies of China’s investment history. It’s this week’s International Need to Know, the Gangsta’s Paradise of international information and data (RIP Coolio).

Job Discrimination Around the World

We were at a bookstore the other day and perused the just-released non-fiction section. Nearly every single book displayed was about how bad the United States is in one way or another from one ideological viewpoint or another. Those writing from the right viewed America as dystopian in a number of ways—a hellhole of crime, illegal immigration and dubious morals. Those from the left saw an American Armageddon in other ways, full of racism, climate disaster and extremists on the cusp of obliterating everything in their path. America has its problems, sins and challenges, no doubt, but it cannot be viewed in a vacuum. There are a bunch of other countries out there. How does America compare? Americans, even the educated, have no sense of the rest of the world and have become increasingly inward looking. For example, let’s consider job discrimination, a definite problem in America but not distinctly American as so many seem to think. A new study–“a formal meta-analysis of 97 field experiments of discrimination incorporating more than 200,000 job applications in nine countries in Europe and North America”–finds that discrimination exists in every country (duh). But perhaps surprisingly to many Americans, the “USA has one of the lowest rates of discrimination, France has the highest.” Sweden does not score too well in this study, certainly far worse than America. And for so many of us who consider Canada our more civilized cousin, Canada’s level of job discrimination is worse than America’s. None of this is to excuse discrimination in America, only to provide a more global context. This is only one issue and one measurement but when one considers the world, you gain a more nuanced view of both America’s assets and liabilities. 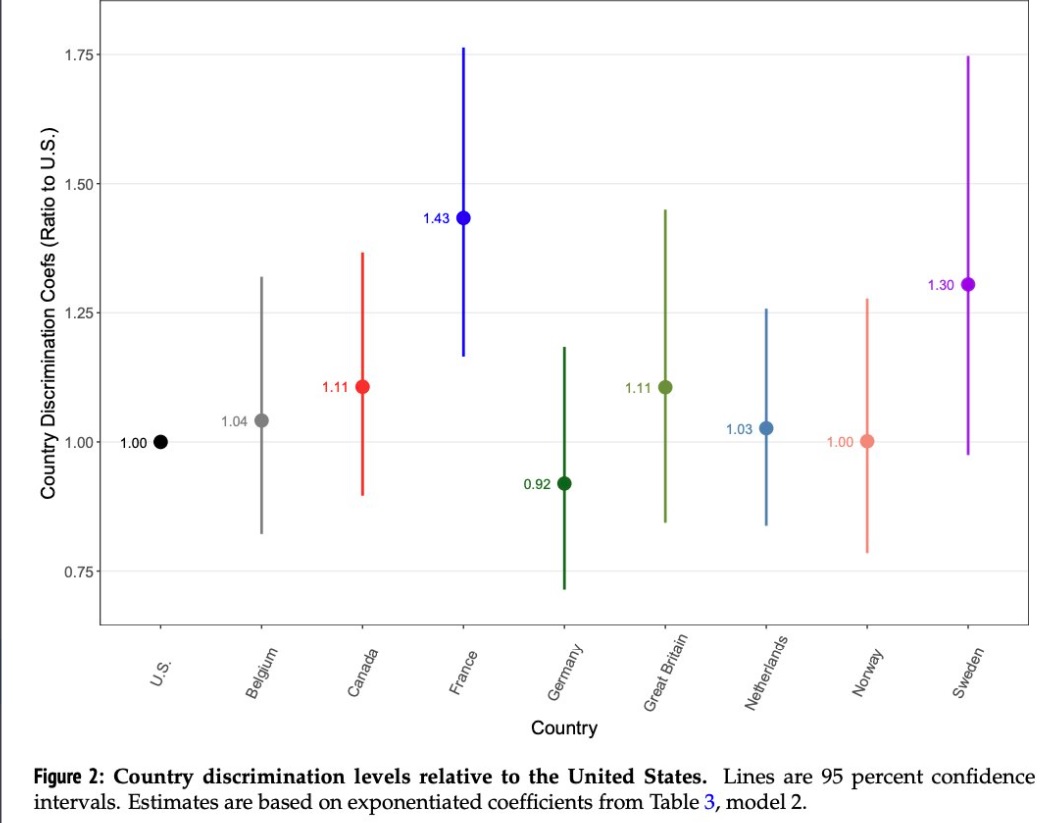 Where the Middle Class Thrives

Speaking of global context, Noah Smith recently tweeted a chart of median disposable household income by country, calling it “the best single measure of middle-class living standards across countries we currently have.” Another pie into the face of ultra American critics is the U.S. ranks second behind Luxembourg, but perhaps the most interesting aspect of this measurement is how much better South Korea does than Japan. South Korea has the 16th highest median disposable household income in the world, nearly 25 percent higher than Japan which is ranked 24th. Interestingly, South Korean movie and TV creators are fixated on the country’s alleged inequality problems, painting a dystopian picture of society via movies and TV shows such as Parasite and Squid Game. And yet, South Korea is one of the greatest economic, social and cultural success stories of the last 40 years. But its artists rarely celebrate this fact. Now it’s true that South Korea’s extraordinarily low fertility rates, challenges helping the lowest rung of society and continued hampering of women are all huge challenges going forward, but meeting those challenges is hindered by not recognizing the success the country has achieved.

You may remember a few months ago when we commented on Wall Street continually getting Chinese investment advice wrong. In order to do business in China, they have to always talk up China, no matter the economic conditions there. On Twitter we recently saw short-term comparisons of the Chinese stock market compared to the world. Over the last six months, China has mostly underperformed the world. That got us to wondering how China has done over the long-term. The answer, as you can see below, is not well. You would have been far more successful investing in global stocks than in the Chinese stock market going all the way back to 1990. Now, of course as we all know, the stock market is not the economy. China’s economy was fabulously successful for much of the last 30 years. And China’s companies often listed in Hong Kong or the U.S. But, of course, as not nearly enough know yet, China’s future economic growth will be about the same as America’s and Europe’s and in the short term it will struggle with zero Covid, a hangover from a real estate bubble and an over reliance on debt to spur unrealistic GDP growth. Wall Street won’t tell you that. We have before and just did again. 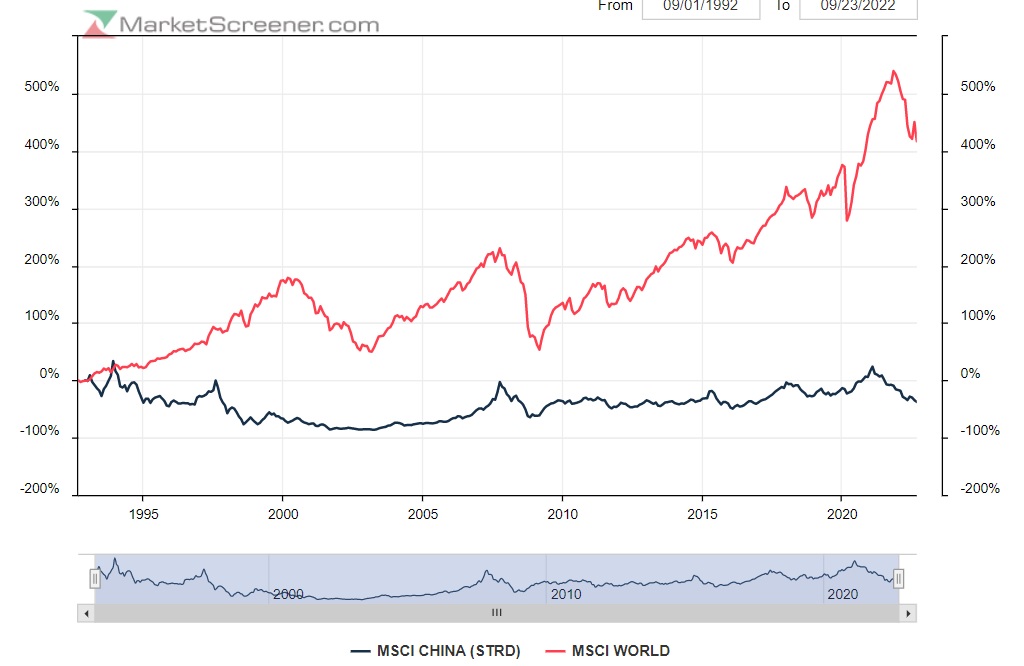