The world is full of surprises, you just have to ask the right questions. We were at a transportation and logistics industry luncheon talking with a kindly older gentleman representing a technology company in the logistics sector. He said his VP asked him to represent the company. We asked what he did previously and he said he’d spent most of his life living in Europe and then Brazil, where he met his wife. They have four children, all grown up and doing well, many now working in the tech sector. We commented about his kids and how he must be very proud. He was but then noted he has 8 kids with his previous wife. Eight???!!! He detailed what they are all doing and where, even showing us some photos on his phone—they are scattered many places, often also working in the tech world.

What was he doing when he was in Europe and Brazil? Missionary work. As a volunteer. He did this for 40 years, never drawing a salary, only having his room and board paid for through donations to the church. He and his Brazilian wife moved back to the U.S. ten years ago when he was 61 for the kids, the four with his Brazilian wife, not the other 8 from the other wife who were already grown. When he moved to Seattle, he essentially had to start over. He said he was doing well in work, essentially at the level of a recent college graduate, but in his case one who graduated at 61. What church was he doing missionary work for when he was living all over the world? Family International. We’d never heard of it. We looked it up later and it’s a bit controversial, classified as a cult by some, with former members making serious accusations against it.

We know nothing other than what we read on Wikipedia so who are we to judge? At 71, he’s relatively successful, working for a good company with 12(!) seemingly happy, successful children and during his missionary life he lived in interesting places like Amsterdam, Florence and Rio. As the saying goes, success is not a destination, it’s a long winding road, each one a bit different depending on the person. As we wander down ours, we look at whether Vietnam will take the China exit, examine the tolls of autocracy and debate China’s local access roads. It’s this week’s International Need to Know, after 21-long years, celebrating our beloved Seattle Mariners return to the playoffs.

A few weeks ago we reiterated how important it is to track whether Vietnam, as it develops economically, follows the South Korean/Taiwan model of political liberalization or the Chinese model of deeper authoritarianism. There are worrying concerns of the latter in recent weeks and months. In Vietnam, unlike China, there is no Great Firewall—we can access Facebook, the New York Times and just about any other website you can think of, and we did when we were there a couple weeks ago.  But Reuters reports that Vietnam is preparing new rules: “that would establish a legal basis for controlling news dissemination on platforms like Facebook and YouTube while placing a significant moderation burden on platform providers…” Is Vietnam, even as its economy continues to develop as China’s did—GDP growth was up 14% last quarter—starting to sharpen its authoritarian claws to ensure continued control of the communist party? The article goes on to say,

“’The government wants to fix what it sees as the ‘news-lisation’ of social media,’ said one source familiar with the talks. ‘News-lisation’, or báo hoá, is a term used by the authorities to describe the misleading of users into thinking that social media accounts are authorised news outlets.”

Vietnam’s GDP per capita is around $2800. South Korea and Taiwan started making substantive political liberalization reform at around $5000 GDP per capita. There were authoritarian potholes before that in those countries and perhaps this is what we are seeing now in Vietnam. Or, perhaps Vietnam is following the new China model. What Vietnam does holds a key for our world’s future. 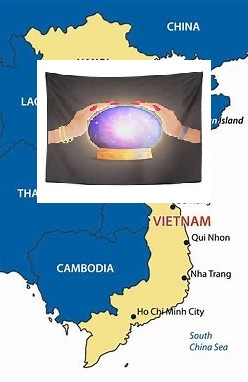 We shouldn’t have to inform and remind people of this but given the troubling trend away from democracy over the last decade around the world, we will keep nudging until it gets through our thick homo sapien skulls: democracy is better than autocracy. Democracy is, of course, better for freedom, but it’s also better for the economy as we’ve noted before in this space. Maybe even more than we thought as a new paper highlighted in The Economist tells us. In the paper, How Much Should We Trust the Dictator’s GDP Growth Estimates,” Luis Martinez of the University of Chicago, says not much. He compares night-time light as recorded by space satellites compared to what autocracies report as GDP growth and finds “that autocracies overstate yearly GDP growth by approximately 35%.” Other studies, using other methodologies, have found that China was overstating its GDP on an annual basis. And remember that even when using GDP reported by these countries governments that democracies perform better on average than authoritarian regimes. The protestors in Iran might be on to something. The people of China, Russia and elsewhere might want to turn towards liberalization, rather than stick with their stagnant systems and dictators. 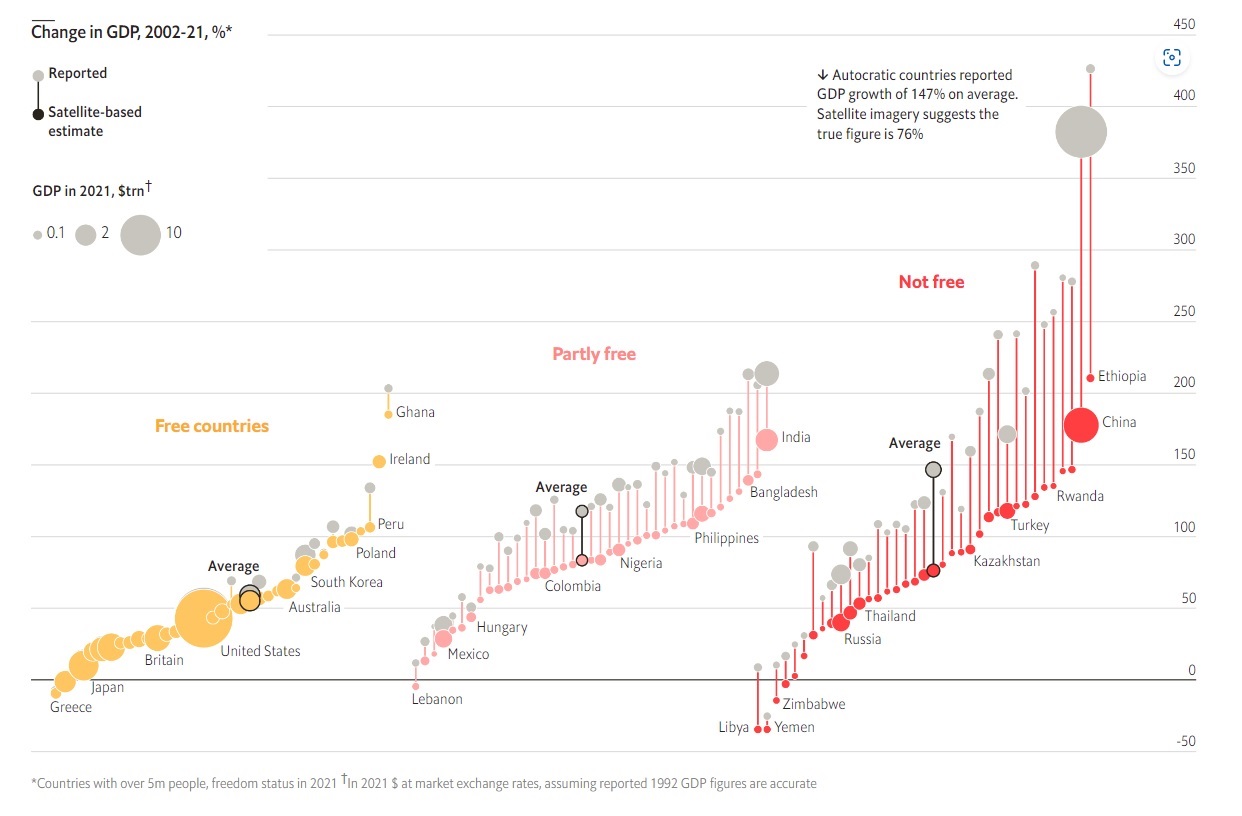 So we hear there’s a big meeting coming up in China in just over a week. Something about a “People’s” Congress where China’s current leader, Xi Jinping, will continue his reign because he’s been so successful over the last ten years—countries around the world think more highly of China, its economy continues to grow at near double digits, freedom is flourishing for all groups in China…wait none of that is happening? Nonetheless, Xi’s grip on power is ever tighter and will be consolidated at the meetings beginning on October 16. We read analysis of various possibilities of new and existing politburo members and who among them might counterbalance Xi’s policies, but we bet that’s not where such forces will come from. It’s always hard to tell for sure in opaque China but it appears Xi has put his own people in place around him. Where he will find tension against his rule is in local and provincial governments. Why? Because they are hurting from the slowdown in the economy and in particular from the real estate crisis. A large portion of local government revenue is drawn from land sales, but as you can see in the Financial Times chart below, that income is way down due to the ongoing real estate crunch. If you’re looking for any forces to change China in Xi’s third term, look locally. 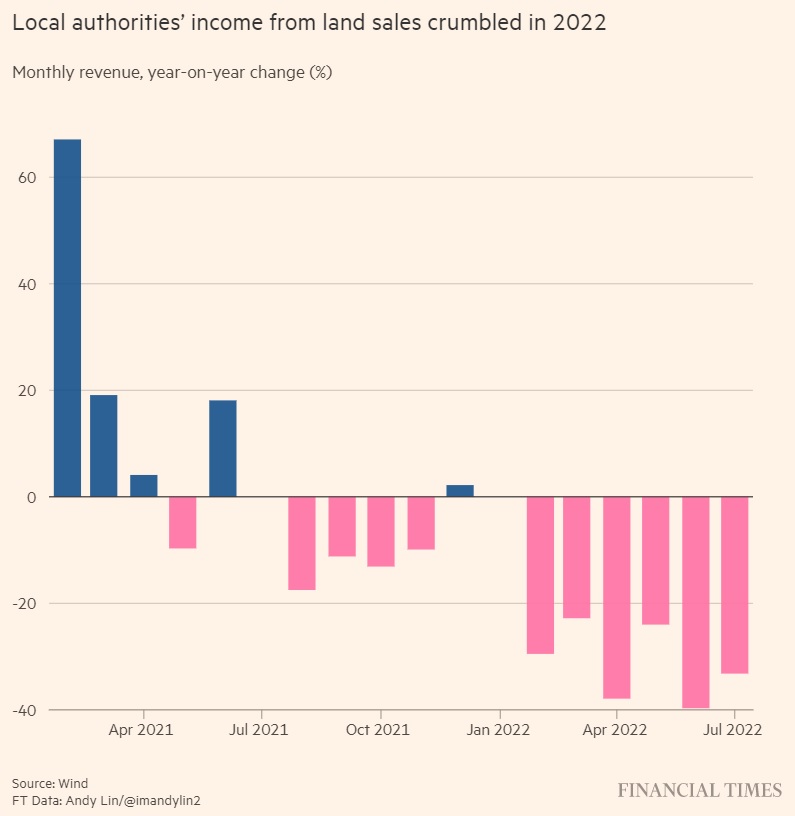 Discrimination Around the World, the Middle Class and is China a Good Inves... Japan in Africa, Biggest Countries GDP Growth and Diversifying and Decoupling...
Scroll to top