New wood floors are being installed here at INTN’s global headquarters. This has wreaked havoc on house, computer and cats, the last of whom are most upset by the upheaval. Willow hides in the basement while the ever sociable Putter tries to hang out with the workers, but is apparently overcome with anxiety causing the poor feline to vomit repeatedly. Fortunately so far he has restricted his regurgitations to defacing the old floors though we tremble at what is to come. In the midst of it all, as we attempted to write this missive among saws, hammers and other noise, two salesmen came to our door wanting to talk to us about switching over to their cable company. When we attempted to explain to them this was not a good time (this should have been abundantly evident by wood, laborers and the general construction mess surrounding them on the front porch), they insisted their information was vitally important and we must talk to them right that minute. It was then that we wished we had trained Putter to vomit on cable company salesmen. So even as we call in the cat whisperer for expert advice, we compare Canada, Venezuela and iPhones, snicker at the idea of China as the leader of free trade and present the world’s third most important graph. It’s this week’s International Need to Know, purring with world information intended to scratch your fancy.

Last year we took to task a news organization for saying Venezuela’s economic problems are due to low oil prices. Canada is a great example of what we’re talking about. Canada, like Venezuela, is also a big oil exporter and certainly its economy suffered when oil tanked in 2014. But, because Canada has economic policies that are not crazy, their economy did not and would not suffer like Venezuela’s. In fact, Canada’s business confidence is at its highest level since before the oil crash and its economy added the most number of jobs since 2012. Meanwhile, it costs $98,000 to buy an iPhone in Venezuela. Canada is also preparing for President Trump by naming Chrystia Freeland* to be their new Foreign Minister. She led the charge in getting the Canada-EU free trade pact approved. With a good chance NAFTA will be torn up by Trump, she would have chief responsibility for negotiating the new pact. By the way, NAFTA was essentially an addendum to the U.S. – Canada Free Trade Agreement which would still be in force even if the new Trump Administration ends NAFTA. And when we talked with the Canadian government recently, the official indicated it’s probably time to update the agreement anyway. After all, many industries didn’t even exist when that free trade agreement was approved. Venezuela meanwhile is in no position to negotiate free trade agreements or much of anything else. It’s not about the oil.

*It’s worth noting that Freeland, of Ukrainian heritage, has been banned from traveling to Russia for her anti-Putin views.

China’s the Leader of Free Trade?

After his speech at Davos, there’s been lots of talk about China’s President Xi Jinping leading the world’s free trade movement since the U.S. is abandoning that role. President Xi certainly talked about the importance of free trade in his speech but his country doesn’t walk it. In fact, a good argument could be made that China is the most protectionist country in the world, or at least vies for the title with India. The “Global Mercantilist Index” ranks those two countries one and two (see chart below) for most protectionist. Even if we look at simple tariff rates, never mind all the non-tariff barriers, China is at best middle of the pack, behind such free trade stalwarts as Belarus, Nicaragua and Moldova. Or, look at China’s new cybersecurity law which will go into effect on June 1st of this year. The new law “imposes new security and data protection obligations on network operators, puts restrictions on transfers of data outside China and introduces new restrictions on critical network and cybersecurity products.” More than one China expert we’ve spoken with notes that the law is designed to bolster China’s local industry and cut out foreign companies. The world is changing but not so much that China is really the leader of the world’s free trade movement. That’s being led by a lovely couple in a small town in Chile out of their third-story apartment. 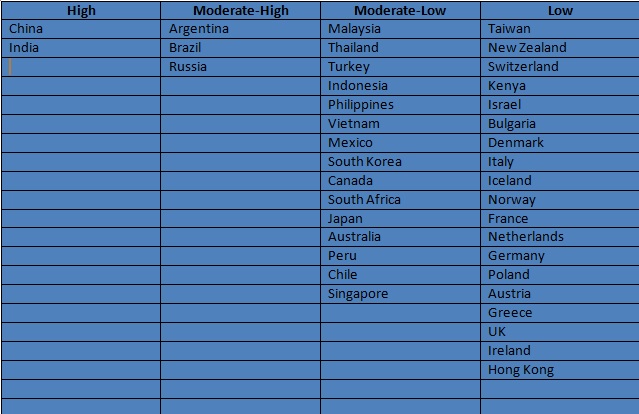 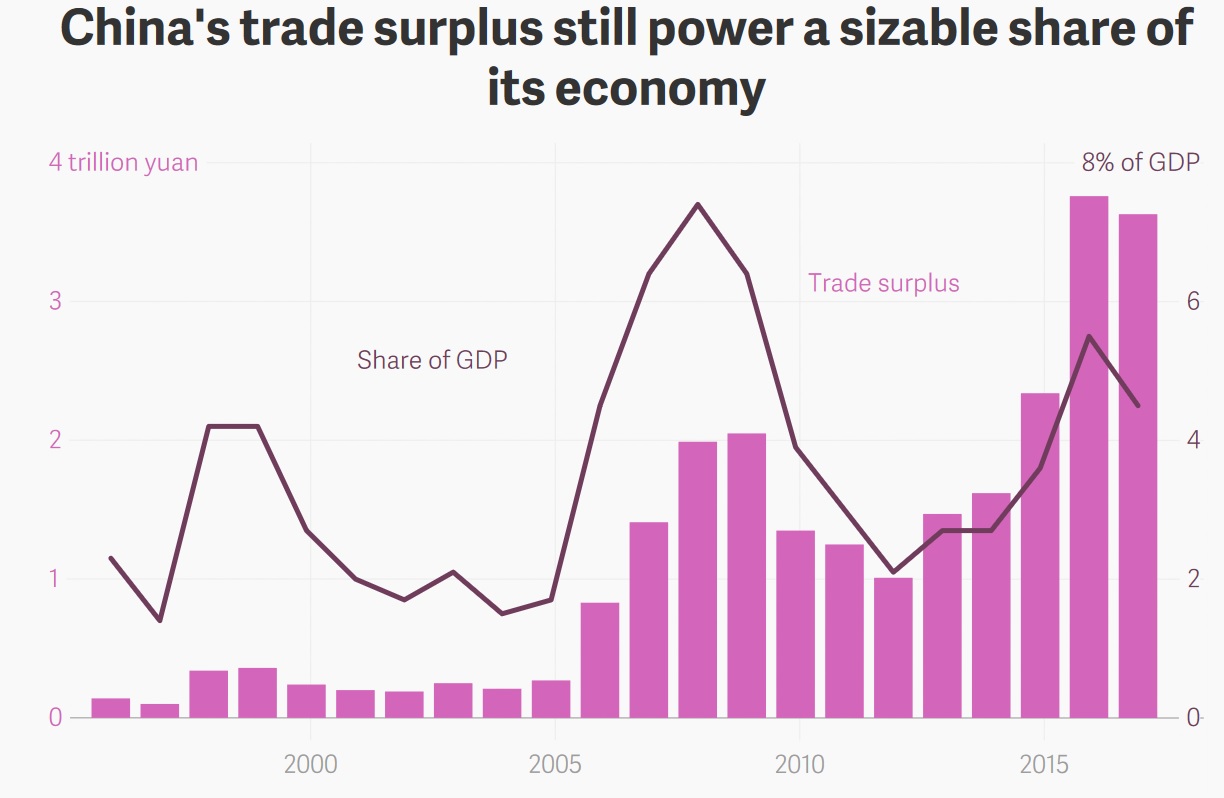 Last year we presented the world’s fifth most important graph. Today, we present the third, which arguably, like a college football BCS playoff argument, could be ranked higher. Either way, peer below and gaze on the factor that is driving so much of what is happening in the world today, including in the United States–the global labor share of corporate production has been decreasing since the early 1980s. Two economists at the University of Chicago crunched the data and found “of the 59 countries with at least 15 years of data between 1975 and 2012, 42 exhibited downward trends in their labor shares.”  Oh, and by the way, it’s not just in developed countries like the U.S., Germany and Japan–China is seeing the same trend (see second graph below).  Trends end eventually, as the Seattle Seahawks painfully learned this season. Whither and when this one is a crucial question for our future. 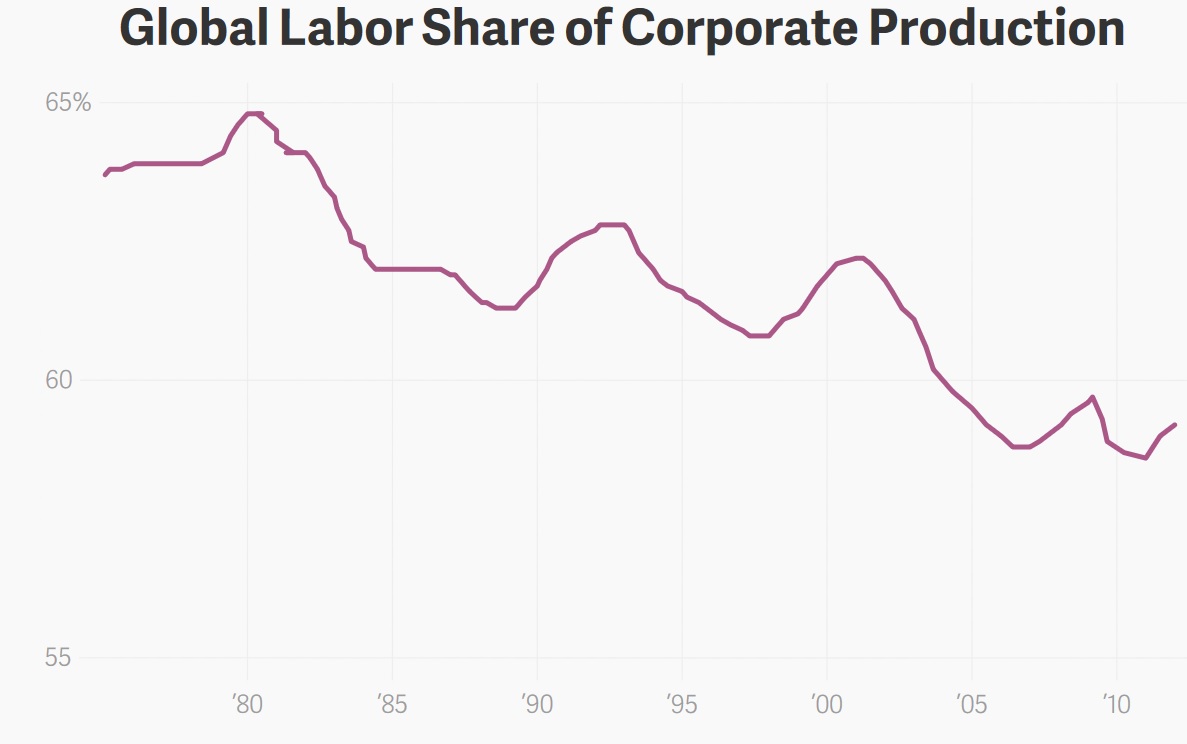 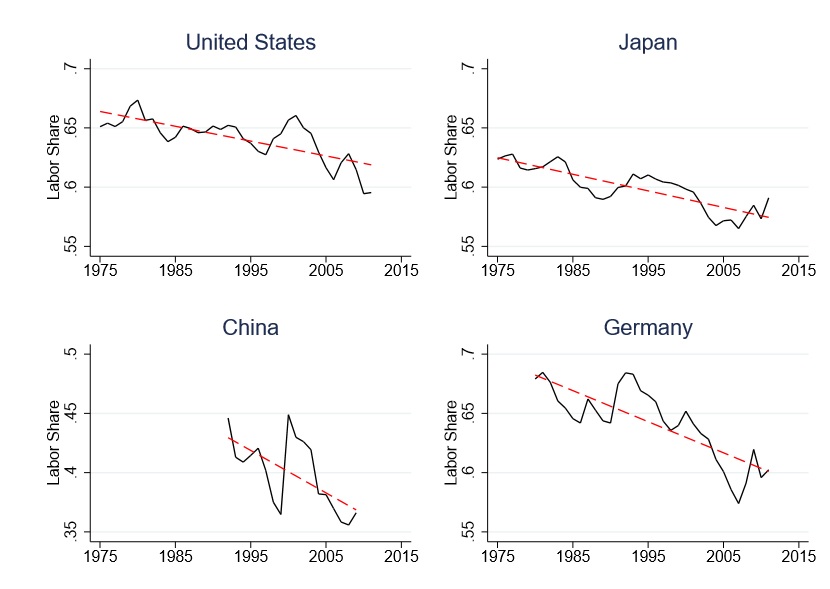